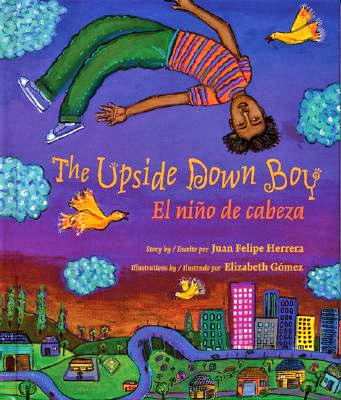 Appointed California’s poet laureate in 2012, Juan Felipe Herrera grew up as the child of migrant farm workers. His bilingual picture books exemplify the type of literature that the teachers in my district are calling for. Written in fluent, vibrant Spanish, drawing upon the lived experiences of Latina/o children and families in the United States, they are full of engaging, lively stories with illustrations that fascinate students. And themes of social justice are always at the heart of his stories.

The Upside Down Boy / El niño de cabeza is a story drawn from Herrera’s own life as a child struggling to learn English and to adapt to a new community. Juanito, the child of migrant farm workers, attends school for the first time, where he is thrust into an unfamiliar environment and lost in a new language. He feels like un niño de cabeza—an upside down boy, who worries as his tongue turns into a rock. Young readers will see Juanito’s shyness, with the help of caring adults in his life—eventually turn to confidence. While his tongue remains a rock for a while, his art expresses who he is:

We are finger-painting.
I make wild suns with my open hands.
Crazy tomato cars and cucumber sombreros—
I write my name with seven chiles.

This is an excellent story to use with English language learners because it eloquently describes the feelings that Juanito experiences as he struggles with English. It also serves to remind English-speaking students (and their teachers) of the challenges that some of their classmates face.

However, the English version of the book can be confusing, especially because it is narrated by a child who does not initially speak English and yet contains a lot of dialogue in English. And as Juanito becomes more proficient in English, the question of what language he is speaking and writing becomes even more confusing. For example, on the last page he is directing the class choir. The Spanish reads: “¿Listos para cantar sus poemas?” le pregunto a mi coro. Uno… dos… !and three!” And the English reads: “Ready to sing out your poems? I ask my choir. Uno, dos… ¡and three!” Here, it’s unclear what language Juanito is speaking to his classmates.

Gómez’s brightly colored acrylic illustrations attempt to capture the colorful, surrealistic tone of the story. Readers will see Juanito’s name spelled out in chiles, for instance, and cattle (“reses”) flying in the sky as he watches the other children play during a time called “recess.” However, the characters are mostly expressionless and, with their thin and awkwardly angled limbs, almost look like stick figures.

Yet, despite the somewhat unappealing artwork, I find it impossible not to fall in love with the story’s rich, metaphorical language and the fact that it is an authentic story from the author’s own life. Recommended.