Just a Minute: A Trickster Tale and Counting Book 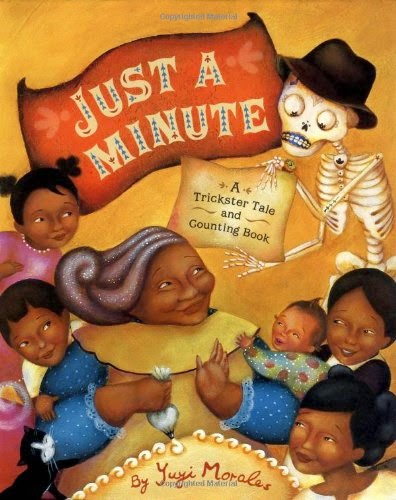 With his sugar-skull face and Día-de-los-Muertos outfit consisting of a bowler hat, wristwatch, and braces to hold his teeth in, Señor Calavera is polite yet insistent. It’s time, he says, for Grandma Beetle to come along with him. Pues, Señor Calavera will soon to find out that Grandma Beetle has other plans—she’s staying around for a while, and Mr. Death will just have to wait—“just a minute.”

From the first double-page spread—in which a grinning Señor Calavera tips his hat to the left and Grandma Beetle, with a bemused expression on her face, nods to the right—young readers, especially Mexican and Mexican American children, will guess that something hilarious is about to happen. The scene is set: Señor Calavera’s not hiding who he is, and Grandma Beetle has no intention of going with him. The only one who seems frightened is a little black-and-white kitten, who runs away—or hides, or tries to appear large—on every spread.

Here, prestigious award-winner Yuyi Morales renders her beautiful, lively artwork in acrylics and mixed media on paper. In rich, warm colors and bold geometric shapes that bring to mind the bright Mexican murals, here is a working kitchen with chile peppers strung together, well-used ollas on the stove, a humongous cast-iron pot with stew bubbling over, baskets of corn and an old corn-grinder, hand-painted wooden chairs, and gorgeous piñatas, hanging from the ceiling.

And here is Grandma Beetle. She’s a strong, dark, round-cheeked, zaftig Indian woman with sparkles in her gray hair and in her eyes as well. She’s single-handedly enjoying her work: grinding corn, wielding a machete to slice a watermelon, filling piñatas, carrying the huge ollas to the table. And all the time, she’s laughing, laughing, laughing, and sometimes sneaking winks to her child audience. Her nine grandchildren—ethnically mixed, some with darker complexions and dark, straight hair; some with lighter complexions and curly hair; and two with red hair—are reflective of a large, loving Mexican family. And the expressions on Señor Calavera’s face (um, skull)—as he grows more and more impatient—are priceless. All of the artwork is warm and lovely, especially that of the grandchildren, surrounding Grandma with hugs as Señor Calavera makes his exit.

Just a Minute, which complements the celebrations of el Día de los Muertos—is way more than “just” a well-executed counting book—it’s a treasure that will charm readers, young and old alike, and is highly recommended.