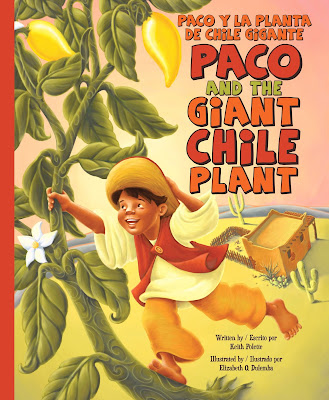 
Set in the Southwestern United States, Paco y La Planta de Chile Gigante is a re-imagined version of Jack and the Beanstalk, the classic English tale of a poor widow and her son who sells their dairy cow for magic beans. Upon learning of her son’s action, the outraged mother throws the beans on the ground where, overnight, they grow into an enormous beanstalk. Looking for treasure, Jack climbs the beanstalk to find a horrible, nasty, greedy giant who attempts to eat him, but ultimately Jack prevails in stealing the giant’s gold and other stuff and the giant falls to his doom.

In Paco, the English boy and his family morph into Latinos. Here, a poor, presumably widowed, mother sends Paco off to town to sell their dairy cow—which he does, for magic chile seeds. But rather than proudly presenting the chile seeds to his mother as Jack did with his beans, Paco plants the seeds himself to see what happens. The chile plant quickly grows up to the sky and Paco climbs it, looking for treasures.

Upon reaching the top, Paco harvests the chile blooms, enters a house of enormous proportions and meets the giant himself. Like the original tale, the giant is terrifying and tries to eat Paco; but unlike the original, he sees Paco as the savory filling for a thin, flat Mexican pancake of masa or flour:

FEE-FI-FO-FUM, I SMELL THE BLOOD OF A HUMAN ONE. BE HE THIN OR BE HE FAT, FOR MY TORTILLA I’LL GRIND HIM FLAT.

In an attempt to save himself, Paco offers the giant his chiles de oro. The chiles burst in the giant’s strong grip and spray their juice all over his face. The juice is so hot that the giant begins to cry a river of tears. With each tear, he begins to shrink and shrink until he is the size of an average man. Once the crying and shrinking stuff stop, Paco recognizes the man as—his father! Yes, years before, the father-cum-giant-cum-father tells Paco, he had climbed a giant chile plant, also looking for treasures. When he got to the top, like his son, he found chiles de oro. But, rather than just picking them, he ate them—and turned into a terrible giant.

So Paco and his father clamber down the chile plant and chop it down as the mother comes out of their house to find her long lost husband with their son. And they live happily ever after.

Paco could be seen as a charming “Latino” rendition of the original, but the devil is in the details. Dulemba’s digitally rendered artwork—on a palette of mostly desert browns, yellows and greens—is designed to reflect a “beautiful desert setting in the American Southwest.” It does. But I couldn’t make sense of the time period(s) in which it’s supposed to be set. Paco and his father appear to be dressed as Mexican campesinos who look like they came out of an old Clint Eastwood movie set in the 1800s, while the mother’s clothing and hairstyle appear to be from the 1930s or 40s.

And Polette portrays his Mexican American characters (including the giant) stereotypically:

• A deceptive Latino child who plants the seeds himself, rather than an innocently precocious boy, who proudly shows his mother how he is “helping” her

• A Latino father who is a dimwitted dreamer looking for treasures in the clouds, who abandons his family, and who becomes a violent thug (before he changes back)

• And finally, Latina/os who eat hot chiles turn into monsters

Then there’s the language: Although there’s a vocabulary page in which each of the Spanish words is translated into English, Paco demonstrates the type of structure that is all too often falsely marketed as “bilingual,” as this one is. But it’s not a bilingual story. It’s not a story in Spanglish, either. Rather, it’s an English-language story with Spanish words casually tossed in throughout—and worse, each Spanish word is embedded in red type. This technique, according to the liner notes, aids in the fun and learning of both languages. But the reality is that it relegates the “other” language to second-class citizenry.