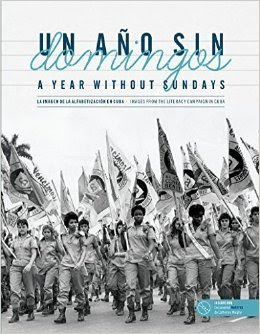 In 1959, when Fidel and Che and their victorious group of young revolutionaries came down from the Sierra Maestra and marched into Havana, they realized that part of their long, hard struggle had come to fruition. Having thrown out the hated Batista dictatorship and their Mafia cronies—at least for now—the island’s new leaders immersed themselves in thought and discussion about both the problems, and the opportunities they had to achieve the participation of everyone into a society about to be reborn.

It soon became apparent that the single most important barrier to break through was illiteracy: some 14% of Cuba’s population was unable to read or write. So as early as 1959, Fidel sent out the call for volunteers. The campaign was known simply as alfabetización, and thousands upon thousands of young people from throughout Cuba volunteered to be trained as maestras—teachers—to go out into the countryside and teach everyone how to read and write. (Although “maestras” is a feminine form, both young men and women participated in the literacy campaign. In the photographs and interviews in this book, however, most of the participants appear to be young girls and women.)

Beginning in 1960, volunteer teachers—“the literacy campaign’s pioneers”—were trained in the mountains of the Sierra Maestra. Here, where much of the fighting for the revolution had taken place, the Cuban people involved themselves in a campaign to bring literacy to all of the tiny country’s people.

Alfabetización had a dual purpose: eradicating illiteracy and bringing down the social barriers between the urban population and the rural working class population. Organized into four brigades—experienced volunteer teachers, La Brigada Conrado Benítez (made up of young people and teenagers from urban areas), La Brigada Patria o Muerte (made up of workers), and active and retired teachers who worked in urban areas—the volunteers covered the countryside.

During the day, the young maestras worked with the campesinos and in the evenings, they worked together at reading and writing. Seven days a week—un año sin domingos. Their textbooks were called, “Alfabeticemos” and “¡Venceremos!”—two words that helped unite the campesinos and the maestras, the campaign with the political reality.

For the campesinos, this would be their first time holding pencils and looking at print on a page and working hard to decipher the meanings of printed words; “for some, recognizing vowels was the hardest thing they had ever done in their lives.” While the campesinos recognized that they were, indeed, becoming part of a great societal change, those who changed most were the maestras. For many of the young people, this would be their first time away from home—ever. This would be their first time sleeping in hammocks, living inside bohíos with palm-thatch roofs and dirt floors, chopping down trees, washing clothes in the river and getting covered with mud, and eating “country food.” Most of all, they learned how to be women and men who could change the world.

The lives of these young people were not without hardship and danger. Indeed, during the CIA-planned and -sponsored invasion of Playa Girón (known in the US as the “Bay of Pigs”), groups of armed counterrevolutionaries kidnapped, tortured and murdered ten of the young teachers. But the young brigadistas, rather than being moved to safety, chose instead to stay with their campesino families who had refused to leave.

Still, one after another, municipalities and provinces nationwide were declared “illiteracy-free zones,” and by the end of 1961—un año sin domingos—the campaign was pronounced a victory, Cuba was proclaimed a country free of illiteracy, and the heroic achievement of so many young people was honored. At a closing ceremony in Havana, thousands upon thousands of maestras, waving enormous pencils to symbolize the campaign, gathered together to celebrate what they had achieved.

All of this history is documented in this 128-page, beautifully designed, bilingual “family album,” Un año sin domingos / A Year Without Sundays. Between 2003-2013, Catherine Murphy, working with The Literacy Project, interviewed over 50 teachers and students who had participated in this monumental campaign. Un año sin domingos is composed of fragments of interviews from 18 of the women and men who spoke of this great experience that transformed their lives—and, indeed, transformed Cuba. Archival photographs, songs, posters and other important and beautiful material from that historical time accompany and complement the interviews.

The large photos are mostly sepia tone, and readers can see the excited expressions on the faces of both the young teachers and their adult students. Color highlights in some places, like a blue sky or a Cuban flag, make the photos even more attractive. Here, on the front cover, are uniformed young people—mostly teenage girls—proudly marching into Havana, holding large banners on which are inscribed “¡Vencímos!” (“We Won!”). Here are the maestras at a rally, honoring Conrado Benítez, the first young teacher murdered by the counterrevolutionaries. Here are two young maestras, riding horseback for the first time. Here are three campesinos at “lunch hour,” intensely studying while their cattle eat. Here is a campesina, laboriously writing her name on a chalkboard. “It was incredible,” a young maestra said, “when they learned how to write their names for the first time. It was like they were discovering themselves.” Here is a young child watching a maestra writing thoughts from José Martí on a chalkboard. A maestra later said,

Here is a letter written by campesino who had just learned to write. And this is what the campaign—and this beautiful book that memoralizes it—is all about:

Amigo Fidel. Te escribo para decirte que ya no soy analfabeto y que cada día me siento más proféro y más feliz con esta Revolucíon que nada ní nadie podra arrebatarnos. Te deseo salud y suerte. Juntos venceremos. (“Friend Fidel. I write to tell you that I'm no longer illiterate and every day I feel more articulate and happier with this revolution that nothing or nobody can take away from us. I wish you health and luck. Together, we will win.”)

And here, on several single- and double-page spreads, are the thousands of young, joyous volunteers in Havana, celebrating the end of the campaign on December 22, 1961. Some are taking photos of this historical moment. Some are wearing the flag: “Territorio Libre de Analfabetismo.” And each is holding up an enormous pencil, the symbol of literacy.

The Cuban literacy campaign is a little-known event here, but it was a year that changed the people of Cuba, campesinos and maestras alike. Catherine Murphy’s documentary, Maestra, and this book bring together living testimony of their struggles and triumphs, and beautiful archival film and photo footage. Both book and documentary are highly recommended. As the Cuban people say, “¡Vencímos!”