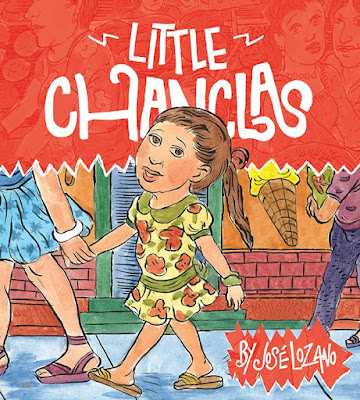 Little Lily Luján loves her chanclas. In a whole school year, their flipitin-flipitónes have accompanied her to “six quinceñeras, four baptisms, three weddings, two graduations, and sixteen family barbecues.” Everyone can hear Lily coming and going, and that’s why her nickname has become “Little Chanclas.”

Although the unrelenting, noisy flipitin-flipitón of Lily’s chanclitas majorly annoys everyone—relatives, neighbors, and others in the community—no one takes her flip-flops away. After all, they are part of who Lily is and how she navigates her world.

Now, every adult (but not necessarily every child) knows that nothing lasts forever—even flip-flops. Once their delicate straps break, it’s over. Lily’s personal tragedy occurs when the straps snap during a family barbecue, one of the chanclas falls into the guacamole bowl, and Chewcho, the neighborhood bulldog, quickly swallows the other one. ¡Aye, que no! Lily’s chanclitas are gone, she’s totally bummed, and there’s no consoling her.

Lily’s relationship to her beloved flip-flops and how friends, family and community members react to the strong-willed little girl is the essence of the story. As her Abuela gently and wisely reminds frustrated family members of their own childhood flirtations with flip-flops, the unspoken subtext demonstrates the acceptance of individual differences and the care and patience bestowed on the community’s children, who are to be loved and indulged rather than scolded or punished.

Using watercolor and inks on a vibrant palette of mostly oranges, yellows, blues and greens, Lozano’s art is reminiscent of the great Mexican and Chicano murals, especially those in East Los Angeles, the Mission District of San Francisco, and the Tex-Mex border towns. Flip-flop designs fill all of the front matter and back matter, and there are chanclas on virtually every interior page as well. Stylized full-bleed illustrations that often spread to parts of the accompanying pages contain real cultural events and real characters whose faces encompass the wide range of ethnic mixes among the Raza peoples in the Chicano communities.

Adding cultural authenticity and lively storytelling for young readers and listeners—hablantes and English speakers together—are the Spanglish words and phrases, together with onomatopoetic word play, all flawlessly woven into both texts. There’s, for example, Lily Luján’s “chanclas slippity-slappetying like castanets” (or, in Spanish, her “chanclas flipitín-flipitoneaban como castañuelas”). And, after Chewcho gobbles down one of Lily’s chanclas, “Chewcho se enfermó de chanclitis.” There are also some tongue-twisting place names tossed into the mix: Benny’s Burgertería, por ejemplo, and Sukey’s Sushitería.

It would seem that author-illustrator José Lozano and translator Luis Humberto Crosthwaite —who both demonstrate a dry wit and deft command of language—worked together, a practice rarely permitted in publishing.

Of course, Lily eventually grows to love a variety of other kinds of shoes—including high heels and moccasins—as well as her beloved chanclas. But her new favorites become—CLEATS! And, while everyone hears Lily’s “clickety-clackety ruckus” on the soccer field, no one cares. As she scores one goal after another, “todos gritarán de emoción,” ¡Échale ganas, Chanclitas!