Lowriders to the Center of the Earth 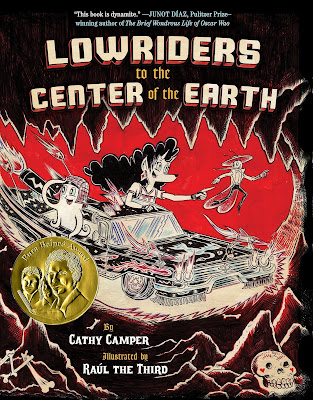 Take any of your favorite Rocky and Bullwinkle’s “Fractured Fairy Tales,” add some random Saturday morning cartoons and a scene or two from Charlie Chaplin’s “Modern Times,” and toss in some Cantínflas, a little “El Chavo del Ocho,” and a telenovela played at double-speed. What you get doesn’t even approximate Cathy Camper’s and Raúl the Third’s high-octane, hyperbolic, over-the-top punny graphic novel for children and everyone else, Lowriders to the Center of the Earth.

In Camper’s and González’s first collaboration, Lowriders in Space, our three amigos—Lupe Impala (ace mechanic extraordinaire), El Chavo Flapjack Octopus (the washcloth-wielding dynamo), and Elirio Malaría (the prime detailer with a bill as steady as a surgeon’s hand)—rebuilt their wreck of a Chevy (“so slow it didn’t even go”) into a lowrider (“the most mechanically inventive, exquisitely detailed car in the universe, with powers gleaned from the galaxy!”) and won the (literally) Universal Car Contest. With the prize money, they were able to buy their own garage, “Bajito y Suavecito,” and became independent from their tyrannical boss. But. At the end of this first volume, their beloved gatito, Genie, frightened by several earthquakes, has disappeared, and Flappy (and the rest of us) see another giant adventure on the horizon….

Their first encounter is a bad-guy character based in contemporary reality. He is the amigos’ “guide,” the serape- and sombrero-wearing Coyote, who looks somewhat like the “Big Bad Wolf” of Saturday morning cartoons—and who confuses the amigos and leaves them stranded in the desert, as do many of the human smugglers (“coyotes”) hired by desperate people attempting to cross over from Mexico and Central America.

After having been deserted by Coyote, the amigos follow the lead of a colony of bats, journey through a gigantic maíz maze, cross the railroad tracks, traverse a field of boulders, and head into a huge volcano. They encounter, among others: the fearsome ghost, La Llorona (who, they say, wanders the Earth, crying, “¿Dónde están mis bebés?” and grabs up children to replace her own), whom Camper and González have morphed into a sad kitty-cat with great big anime eyes that rain great big blue tears all over her umbrella-patterned dress. And El Chupacabra, the dog-like monster who feeds mainly on the blood of goats and other livestock, appears to have a special taste for Lupe (who is, after all, a ruminant mammal). 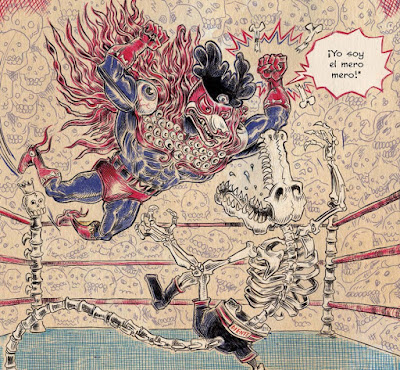 But the main bad guy—even worse than Coyote—is Mictlantecuhtli, the hulking, spine-chilling Aztec god—who captures creatures in his great corn maze and forces them to inhabit Mictlan. Here, he becomes el mero-mero, the rudo of all rudos in the Realm of the Dead’s lucha libre ring, swiftly transforming all who dare challenge him into piles of skeletons and whose eyeballs he wears around his neck. In a super-bout that challenges the very lives of los téchnicos Lupe, Flappy and Elirio (not to mention Genie)—their combined technical skills and brainpower, deep affection for each other, and ability to work as a team make for the emotionally best, most satisfying (and kind of unexpected) lucha libre finale ever (followed by a huge Día de los Muertos pachanga, in which La Llorona sings the beautiful, heart-rending ballad, “Cielito Lindo”).

Written in English with over-the-top puns and other wordplays and illustrations that effortlessly and appropriately incorporate Spanish and Caló, both the first and second titles ingeniously hold the attention of adults and are way silly enough to attract reluctant readers.

A few from Lowriders to the Center of the Earth, including this “knock-knock” encuentro:

Then there are Flappy’s malapropisms; here, the names for rock formations—“big dumb ignoramus rocks,” “sedentary rocks…like napping at the beach,” and one of my favorites, and I hope one of yours, “metaphoric rocks, the building blocks of poets everywhere”—which are accompanied by depictions of their correct names (carved out of the giant rocks themselves) and ten-second (at most) geology lessons about weathering and the erosion of rock formations.

There are also short “units” about technology, such as the mechanics of a swamp cooler—“hecho en un pantano”—and the wonders of electromagnetic coils, which, when combined with hydraulics, become powerful enough to make the lowrider “hip and hop, dip and drop,” freeing up the tires so the amigos can escape from the worst monsters in the Underworld.

González’s art, in traditional Chicana/o doodling form with the time-honored red, blue and black Bic® pens (this time adding green) on what appears to be brown paper grocery bags stained with coffee, uses cross-hatched, stamped and spiraled patterns mixed with papel picado and other designs as they happen to occur to him. A master doodler, González gives readers, in no particular order and for no discernable reason, a bunch of fun things to look at. Here, for instance, readers may find a hitchhiking Mexican Kilroy (yes, he was here), a jackalope, a gnome, cuddly bears, Olmec heads that appear to be rudos, Cheech and Chong, and a tiny raven among the crows (warning “nunca más”).

Although all of his flat-out silly illustrations will appeal to hablantes and English-speakers alike, González saves the most exciting, and by far, the most engaging ones for the mega-bust up on the last few pages, which readers of all ages will want to scrutinize over and over. González certainly ought to receive a Pura Belpré Prize for Traditional Mexican Illustration.

In Lowriders to the Center of the Earth, Camper and González ramp up their hyper-silliness to the level of a Roadrunner cartoon. Something goes wrong, the three amigos fall off a cliff, and the next thing is they’re having yet another adventure. I look forward to seeing the next in this series, maybe a prequel. Who are the three amigos and how did this inter-species trio get together? We know that Lupe, who runs the show, is an adult. And zoot-suit-wearing Elirio is probably a young man. Flappy, al otro mano, is less mature and the others look out for him. Is he a child or just childlike? Are they all roomies or is there a deeper relationship, sort of like with Bert and Ernie? Will we ever find out?

As in their first collaboration, Camper’s hilarious story and González’s ultra-detailed artwork encourage children to develop their imaginations and appropriate suspension of disbelief. Chicana/o children in particular, besides appreciating the cultural and linguistic references that are part of their everyday lives, may be encouraged to see Caló as poetic and beautiful as “regular” Spanish and that great Chicana/o art doesn’t need expensive stuff to produce. As well, children who are not Chicana/o (or who may not even speak or understand Spanish) will find a lot to learn about and enjoy, and unstated lessons both in the text and art. The story also works for teens and young adults as well, who will “get” some of the smart and funny references and nuanced word play on just about every page. For everyone, perhaps the most important thing they will find here is that community trumps individuality.

Pull-quote: “Lowriders to the Center of the Earth—a delightful, hilarious, exciting, culturally-driven collection of textual wordplay and artful doodles—is must reading for every age, ethnicity, gender and species! It’s the best hyperbole-driven graphic novel in the world!”