On the Other Side of the Garden 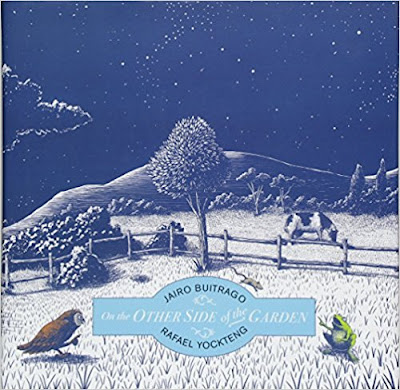 Jairo Buitrago and Rafael Yockteng, who gifted us Dos conejos blancos // Two White Rabbits and Camino a casa // Walk with Me, present young readers with another beautiful story in which the complexity and symbolism is half-hidden in its seeming simplicity. While children born on this side of the garden will enjoy an evocative story of a little girl’s temporary stay with her loving grandmother while her parents sort out their lives elsewhere, immigrant children born on the other side will see the difficulties they themselves may have had to endure while navigating a new and different world and learning some of life’s lessons along the way.

Textually and visually, sadness permeates almost every page. As young Isabel’s grandmother shows her to the place where she will be sleeping, she looks straight ahead and doesn’t notice an owl-decorated bedspread, a frog planter, some lilies in a vase, and a small framed picture of two mice with a huge hunk of cheese. All she knows is that this house isn’t her house, and she realizes that she no longer lives with her parents. She covers her face with a pillow and sighs:

My bedroom wasn’t my bedroom…. I lay down on the bed that wasn’t my bed, thinking about the city, about my friends who were far away now, and that Dad would have to come back and get me some day.

In the next spread, Isabel sits up, surprised. She’s not alone. The three creatures—the owl, the frog and the mouse—are alive and peering at her through the window. Rather than being frightened, she opens the window and talks with them. Here, observant readers may notice that everyone speaks the same language and that this story is more than it appears to be.

Yockteng’s textured digitally produced illustrations—mostly on a limited, almost-monochromatic palette of dark, flat blues with only the owl, the frog, the mouse, Isabel’s nightdress and an occasional image in other colors—appear as hand-drawn scratchboard or linocut prints and complement the child’s somber emotions.

On the cover and on almost every double-page spread that follows Isabel’s initial meeting with the creatures who have come to visit, young readers will see a long wooden fence separating one side of the garden from the other side of the garden. At night, as the owl, the frog and the mouse walk with Isabel along the fence, they caution her:

“Never cross this fence, Isabel,” warned the owl. “There are some fierce dogs on the other side.”
“And they bite,” said the frog.
“Sometimes I sneak across to eat a little of their food. So if you want to go over there, I can keep watch so they don’t appear all of a sudden,” offered the mouse.

Here is where young migrant or immigrant readers will probably understand the symbolism: The “fence” is the international border, the “fierce dogs” on the other side of the fence represent La Migra, the US Border Patrol; the owl and the frog will stay on this side to warn other migrants and immigrants of the dangers to come as they cross, and the mouse is a “coyote,” a guide who leads groups of migrants and immigrants safely across to the other side.

As the new day dawns and Isabel begins to grow into her new (for now) environment, Yockteng’s scenes take on more color. The owl, the frog and the mouse remain at their posts while Isabel says goodbye and runs toward her grandmother’s house. Here, on this side of the garden, she is safe in the protective arms of a woman she hardly knows, and she will settle in to await news from her parents on the other side of the garden. The child has taken off her muddy boots and, next to them on the grass, is a plate of bread and jam her grandmother has prepared for her. Isabel’s grandmother is smiling while she shows the child the flowers in her garden, and Isabel, holding a cup of steamed milk, acknowledges that “the garden looked different in the daylight,” but hasn’t yet begun to smile. There’s still danger lurking, though: A black cat is stalking the frog and the mouse, who are trying to conceal themselves and preparing to flee. And on the next spread, the cat has picked up speed and is chasing them.

In the upper right-hand corner, a small falcon navigates the currents of air. And Isabel is almost smiling. Although her parents have not returned (yet), still, she feels less abandoned and, with her grandmother’s love and patience, is beginning to heal. We don’t know how this young person’s story ends, because, in this story as in reality, there is no neat ending to what has occurred and what is continuing to occur.

Throughout history, the rise of fascism has always been marked by the dehumanization—the “othering”—of some people and often, of children. A carefully guided reading of On the Other Side of the Garden, along with Dos conejos blancos // Two White Rabbits, presents an opportunity for caring educators to make a difference in the difficult lives of migrant and immigrant children who, for one reason or another, may not be able share the realities of their lives. These educators have an opportunity here, however small, to push back against this government’s xenophobic assaults by acknowledging and honoring the children’s struggles and showing them that they are loved. On the Other Side of the Garden is highly recommended.