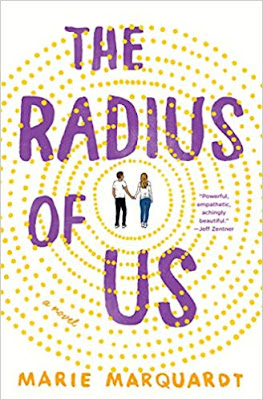 Told in the alternating voices of two traumatized teens, The Radius of Us is an attempt to explore how the “American Dream” can quickly turn into a nightmare, how young lives can be disrupted and broken, and how—with support systems available and in place—they can be healed.

Seventeen-year-old Gretchen Asher is a white upper-middle class high school senior who has everything: her Mom and Dad are both professionals, her relatives and friends care about her, and she has a boyfriend and typical teenage worries. One night six months ago, Gretchen became the victim of a mugging by a Latino boy in a parking lot in her Atlanta neighborhood; and she now has sudden, debilitating panic attacks that leave her feeling unsafe everywhere. She is unable to attend school, socialize with her friends, or interact meaningfully with anyone.

Phoenix Flores Flores, also a teen, has run from a town near Ilopango, El Salvador, torn through with gang violence. With his younger brother, Ari, he’s an asylum-seeker who has terrible secrets. Temporarily living with a caring, upper-class white lesbian couple (while Ari stays with another family), Phoenix has access to a private attorney and everything else the system has to offer while he awaits his day in court. Phoenix speaks “perfect American English” learned from missionaries in a bilingual school in his village, and easily communicates with Gretchen.

Together, through their growing relationship, the two wounded teens help each other come to terms with, and eventually begin to heal from, their traumatic experiences.

But The Radius of Us is problematic from the beginning. At the sight of a Latino teenager (who turns out to be Phoenix), chasing down a runaway dog, Gretchen is terrified:

[W]e saw that boy—his arms wildly shoving the bushes apart. That boy who was not yet a man, the one whose features I knew too well, whose face was etched into my mind, the shape of whose hands I couldn’t seem to forget. That boy with light-brown skin, deep-brown eyes, short dark hair….I took a few steps back, trying to shove his image out of my mind, trying not to let my body remember the grip of his hands.

A few pages later, Phoenix tries to figure out what he might have done to provoke Gretchen’s panic attack:

I’ve been in this place for fifteen days, and I’m already scaring away the white girls. What the hell is wrong with me? Back in El Salvador, I spent five long years working as a guide for visiting church groups….Those groups had tons of white girls, and I never had any problems with them. So what did I do to scare away this one?

Here, Phoenix, whom readers have just met, blames himself for being seen as a perpetrator. No matter how this story progresses, it sends a subliminal message to readers about who is likely to be victimized and who is likely to be a perpetrator. Moreover, while the story touches on the issues of mental health, identity, cultural bias, and immigration, it minimizes the terror of what the Salvadoran asylum-seekers endure every day, both at home and in the US. The only thing that YA readers will learn about El Salvador is that life is unlivable there and that young refugees are fleeing the murderous gangs. They will not learn anything about why the Northern Triangle (Guatemala, El Salvador, and Honduras) has become so dangerous, what the US role has been and continues to be in destabilizing Central America so that chaos thrives, organized crime rules, and terrorized people are swimming into the mouth of the shark. They will know only—gangs.

My grandmother had a little courtyard with some fruit trees, and we used to plant beans and corn. But most people, they get jobs at factories, unless they’re too busy dodging bullets. Or shooting them.

YA readers will also not learn that trauma caused by the constant danger of living in a situation where your life is not your own and where you could be killed in an instant and where a normal reaction for you and everyone else is to flee—is way different from trauma caused by a single horrible experience and with people and a plan in place to help you deal with the flashbacks. Rather, the author, in attempting to show how trauma can affect everyone and how everyone can be healed and made whole again, presents a shallow observation and a false equivalence—and a contrived white-savior trope—that disappears the complex problems of abuse and trauma.

In her Acknowledgements section, the author thanks the many teenage Central American asylum-seekers she spoke with while they were in detention. For her, she writes,

This all began on a Saturday in May 2013. I walked into a detention center’s visitation room for probably the hundredth time, but still my heart broke wide open. As I spoke on the phone, through the glass, with a teenage asylum-seeker from El Salvador, I knew that I had to write this story. To…all the Central American asylum-seekers I have been so honored to know since that Saturday: I have learned so much from your bravery, your commitment to family, and your desire to find a better future. Thank you for trusting me enough to tell me your stories, and for sharing with me your own American dreams. I wrote this book for you, with the sincere hope that—someday very soon—all of your stories might find a happy ending. Godspeed.

In the past few years, the question of who gets to write someone else’s story has been widely and hotly debated: from “use your imagination” to “write whatever’s in your heart” to “tell what you know” to “stay in your own lane.” No matter how much “research” this author has done, no matter how much the teenage asylum-seekers from Central America broke her heart, she has recklessly veered across other people’s lanes and, in doing so, has created yet another contrived white savior trope that mollifies the unforgivable.

In The Radius of Us, the author handily resolves everyone’s problem: Phoenix’s gang tattoo is transformed into a phoenix, rising. A former gang member—who is now “legal” and “super-religious”—testifies on Phoenix’s behalf when he files his expensive appeal (because his sponsor has lots of money to fund it). Phoenix and Ari are granted asylum and become “legal,” and young Ari (an amazing artist who had been unable to speak all this time) attends middle school, where he writes and speaks and learns English slang. Phoenix will probably teach Gretchen to speak Spanish and cook pupusas, and she and Phoenix and Ari will probably wind up living together. Phoenix will probably quit his job at the Home Depot and he and Gretchen will probably attend university together. Phoenix and Gretchen and Ari are becoming whole again—together.

And what of the many thousands of refugees and asylum-seekers—who risk rape and murder on top of the death trains collectively known as La Bestia, or an agonizing death from heat stroke or thirst while attempting to cross the desert—as they continue to flee the Northern Triangle to seek asylum here? What of the many thousands who, once here, cannot afford the services of private appeals lawyers when the immigration courts rule against them? What of the thousands of “unaccompanied” young people who are swept up and remain in US detention, sometimes for years, sometimes permanently separated from their parents?

All this author seems to be able to do is hope that their stories “might find a happy ending.” The Radius of Us is not recommended.