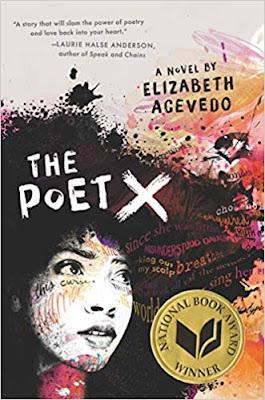 Written by an acclaimed slam poet, The Poet X is the verse novel of 2018—winner of the National Book Award and the ALA/YALSA Printz Award. Acevedo’s young adult debut is the story of a girl who finds her voice through poetry. Xiomara is the big, unattractive, less academically gifted, less obedient, female twin in a conservative Catholic Dominican immigrant family:

Taller than even my father, / with what Mami has always said / was “a little too much body for such a young girl.” / I am the baby fat that settled into D-cups and swinging hips / so that the boys who called me a whale in middle school / now ask me to send them pictures of me in a thong.

Her parents forbid her to interact with boys even though the boys whistle at her and try to talk to her on the street, and one boy in particular, the kind, music-loving Aman is paired with her in biology class. And her mother makes her attend confirmation class every Tuesday afternoon, which conflicts with the poetry club her favorite teacher, Ms. Galiano, has started.

Xiomara struggles with Catholic teachings and with the characterization of women, via Eve, as weak and vulnerable to temptation, thereby justifying the harsh restriction of women and girls. Set in New York City, where teenagers have freedom and temptations are everywhere, Xiomara struggles against her mother’s strict rules bordering on fanaticism. Her mother grounds her, beats her, and attempts to destroy everything that Xiomara values. Xiomara is already late in getting her confirmation, to her mother a sign of her sinfulness and failure and to her, a big part of her growing self-doubt and questioning of everything she has been taught:

“Mami, what if I don’t
Do confirmation?
What if I waited a bit for—”

But she cuts me off,
her index finger a hard exclamation point
in front of my face.

“Mira, muchacha,”
she starts, “I will
feed and clothe no heathens.”

While many verse novels use visual images as their point of reference, Acevedo’s novel uses music—the songs of Nicki Minaj, Drake, and other R&B stars. This works well with Xiomara’s decision to perform slam poetry, and her verse captures the musicality of the R&B genre as well as the code switching among English, Spanish, and Dominican slang—as, for instance when she shows the Dominican men “finishing their dominoes tournament with hard slaps / and yells of “Capicu!”

Running throughout this story of coming of age, first romance, and discovering a beloved brother’s deepest secret, is the central theme of a young woman coming of age, coming to terms with her sexuality, and finding her voice. For Xiomara, who chooses to perform her slam poetry under the name “The Poet X,” free verse is the freedom to be herself, to say what she wants, to make her choices, and to come to terms with her own version of faith.

The Poet X is highly recommended.