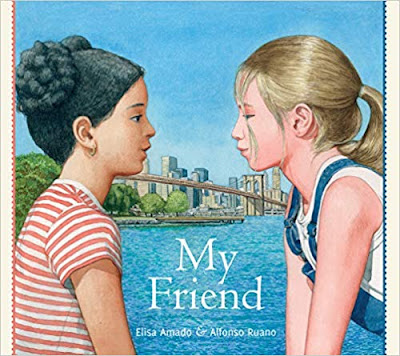 What does it mean to be alone and lonely in a strange place? What might it mean to feel safe? To be loved and accepted? To have a friend you can rely on? And what does it mean when that relationship becomes strained and possibly disrupted?

In this intimate, heart-wrenching second-person narrative, a newly arrived refugee girl relates the story of her tenuous and emotional relationship with a white girl. In a sense, this narrative style invites young readers into the young girl’s life and challenges them to be like her friend.

On the cover, the young narrator wears a red-and-white striped polo shirt and her dark hair is neatly braided and pulled into traditional Indigenous chongos. She faces a white girl in denim overalls, whose blond hair is casually pulled back into a loose ponytail. In the background are the Brooklyn Bridge and the East River.

Amado frames this young girl’s story between two versions of a song written in 1915 by José López Alavés, an Indigenous man from Oaxaca, after he had migrated to northern Mexico. The first, in Spanish—entitled “Canción Mixteca—My Father’s Version”—appears on a front end page. The second, in English—entitled “Mixteca Song—My Translation” is on a back end page. Both languages portray the song as a lonely, mournful yearning for home. In a brief note, Amado informs the reader that her translated version is what she thinks her “favorite family song sounds like in English.”

“For us, in Spanish,” she writes, “it’s exactly how we feel about living so far from the home that we left behind, that we miss.”

Told from her perspective to her white friend, My Friend is a poignant chapter in a young girl’s refugee story. The second-person narration throughout—without identifying the young girl by name or her family’s specific ethnicity, while inclusively incorporating the various heritages and pan-Indigenous images from the southern Mexico-Guatemala region—transports young readers directly into the story and heightens its intimacy.

Amado hints at the backstory, so readers will learn from the song—and from a few words from the girl’s father—that this family has survived tough times, has limited choices, and, for better or worse, is settling into a community of strangers. And, for this story, that may be enough. There’s no further explanation because none is necessary.

Soon after the narrator and her family arrive in Brooklyn, she forms a fast friendship with a white classmate; the two are always there for each other. “I knew you would be my best friend the day I came to school the first time,” she says. “I know you and you know me. That is why we are best friends forever.”

But when she invites her new friend over for a special dinner with her family, things appear to go awry. The girl’s best friend does not seem to like the food. Or the loud music, a song “that makes us remember where we were before we came here and what it was like.” Or the shouting and arguing. “That was so weird!” she says, and decides to go home early.

The narrator is bereft; she’s internalizing the horrible thought that her best friend doesn’t like her anymore. Echoing the song, she says she “feels like dying.” This is not hyperbole; it’s her pain, the loss and betrayal that wrap around her.

“I want to go home,” she cries. “I hate it here!” But for this refugee family, as for so many others forced to come here, returning to their homes and communities is not an option. Her family’s loneliness and sorrow are palpable. “We can’t go back,” her father tells her. “We have no choice. Just be glad you are safe…”

That night, she plays the sad song over and over. “I know you and I thought you knew me…. But you don’t know anything about me!…I was so mad at you that I never wanted to see you again.” On her way to school the next morning, she worries. She’s lost so much and now she’s lost her best friend as well. But as she reaches school and sees the girl, she remembers, among other situations, when her best friend challenged the mean kids who were bullying her: “Drop dead! She’s way cooler than you!”

And when her white friend thanks her for dinner and says that she “really had fun,” the two walk in the door together. Best friends.

Ruano’s art, rendered in watercolor on paper, effectively complements this refugee family’s realities, emotions and dreams. In one particular full-bleed double page spread, for instance, while the self-conscious white girl sits on the family’s couch, the young narrator and her father—their exuberance demonstrated by the rainbow colors that pass through them and the Indigenous art that frames them—belt out the song from their homeland and their hearts.

Elisa Amado was born in Guatemala, and it appears that My Friend might be part of her story as well. While the family sings this mournful song of loneliness and despair, the father is enraged at a situation he can’t control—they must stay here. For refugees desperately fleeing to the US—“into the mouth of the shark,” so to speak—this story couldn’t have been published at a better time.

My Friend will resonate with youngsters who are immigrants, migrants or refugees everywhere. Amado is an amazing translator as well, and I look forward to seeing her Spanish version. Highly recommended. 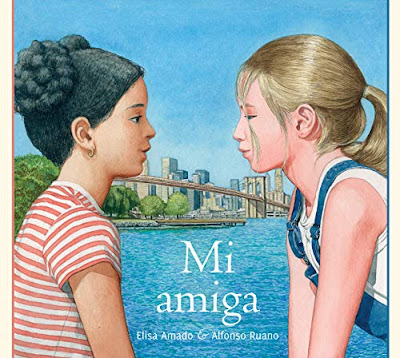 Elisa Amado is a wonderful writer and an excellent translator. Although Elena Iribarren’s Spanish translation here is adequate, it doesn’t reflect the nuances of the story—especially the child narrator’s own voice and her sense of self.

Central to the story is “Canción Mixteca,” a song of loneliness and despair and wanting desperately to go home. It’s this refugee family’s favorite song, and the child narrator deeply feels the song’s refrain, “quisiera llorar, quisiera morir” (“I would like to cry, I would like to die”).

Most of the problems children have to deal with in middle school include being dissed and not having friends. For newly arrived immigrant or refugee children, their troubles and anxieties may be multiplied. Both the English and Spanish versions deal with this anxiety; however, Amado’s English version appears more realistic than Iribarren’s Spanish, which is stilted and sometimes misleading.

When kids at school mock the young newcomer as “weird,” her friend immediately shuts them down: “Who cares? We’re best friends. Is that a problem?” In the Spanish version, however, her friend’s words appear self-conscious: “A mí no parece rara. Es mi mejor amiga. ¿Cuál es el problema?” (“She’s not weird to me. She’s my best friend. What’s the problem?”) Today’s tweens don’t talk like that—they’re more confrontational when a friend is dissed. Like, “¿Qué les importa?” (“What do you care?”)

After a special dinner that the new child’s refugee family has prepared, her friend laughs and remarks: “That was so weird!” The child is bereft: “I felt like dying.”

But the reason for her deep hurt in the English version is not reflected in the Spanish. In that version, her friend says, “Sabes que? Nunca he estado en una cena como esta!” which can be interpreted as curiosity about or enthusiasm for the meal rather than disdain (“You know what? I’ve never been to a dinner like this!”). Yet the protagonist is heartbroken, thinking, “Yo me quería morir” (“I wanted to die”), an emotional disconnect resulting from an awkward translation.

The refugee child is miserable. She doesn’t know how she will exist without a best friend. But then she remembers her friend’s confrontation with the kids who had made fun of her clothes: “Drop dead! She’s way cooler than you.” In the Spanish, however, her friend says, “Callate. Ella es míl veces más interesante que tú.” (“Shut up. She’s a thousand times more interesting than you.”)

While “callate” would be appropriate here—unless you really wanted a person to die, in which case you’d say, “muerate”—the rest doesn’t even come close to a rejoinder to kids who are trying to embarrass your friend. Rather, you’d probably say “¡Callate—Ella es mucho más chida que tú!” (Shut up! She’s way cooler than you!”)

In comparison to the vividness and specifics of Amado’s English version, Iribarren’s Spanish feels flattened and generic. It doesn’t reflect how tweens express themselves; it fails to convey the passion of a child in pain or the validation she feels when her best friend defends her. While My Friend is highly recommended, Mi amiga is not.