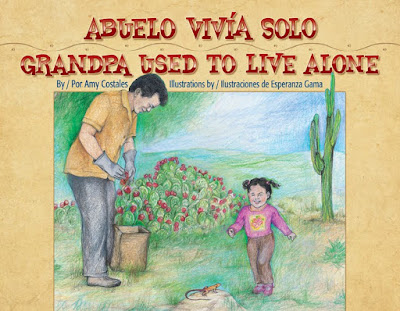 Narrated by the granddaughter whose birth and growing up transform her grandpa’s peaceful, solitary world, Abuelo vivía solo / Grandpa Used to Live Alone is an intergenerational story-poem of adaptation and love. It’s told first in Costales’ rhythmic Mexican Spanish and followed by its equally rhythmic English translation.

When his daughter and her new baby move in with Abuelo, everyone’s world changes: Mamá, who is depicted in only one scene, works and goes to school; while Abuelo, who had only himself to care for, now takes on the responsibility of raising his nieta. 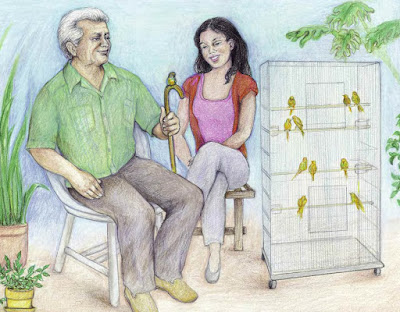 Each left page contains text blocks of the Spanish and English, separated by a detail that reflects the theme on the full page illustration on the right. For instance, a few lotería cards on the left segue into an older abuelo and his teenage nieta on the right playing cards at the kitchen table.

Almost all of the images depict Abuelo and his nieta together. Beginning with him as the grandpa of a new baby, story and illustration show time passing. While Abuelo is growing older, Nieta is growing up—her crib is switched for a bed and her high chair for a chair at the table, she grows proficient at making arroz con leche, and eventually learns to drive. But while their roles change, their loving relationship remains the same.

Two poetic themes central to this story—and symbolic of the child’s growth and the grandpa’s aging—are almost identical descriptions of their preparation of the evening’s arroz con leche and the bedtime routine that follows. At first, the toddler plays with the measuring cups and watches her abuelo stirring the arroz con leche in the pot on the stove; later, she’s preparing the ingredients by herself. The other theme centers on their bedtime ritual. Beginning with grandpa’s carrying his grandbaby upstairs and, as she sleeps, rocking in the chair by her crib “sólo para escucharme respirar”—“just to hear (her) breathe.” The story ends with the adult granddaughter holding her grandpa’s hand as he walks upstairs, and rocking in the chair by his bed “sólo para escucharlo respirar”—“just to hear him breathe.”

Gama’s soft, colored-pencil illustrations reflect the gentleness of the story and, for the most part, cultural details of this Indigenous Mexican family and household. And Costales’ rhythmic Spanish story-poem will have the youngest hablantes—as well as English-speakers who want to learn Spanish—learning the details for preparing arroz con leche, and enjoying the cadence and repetition as well. Abuelo vivía solo / Grandpa Used to Live Alone is highly recommended.