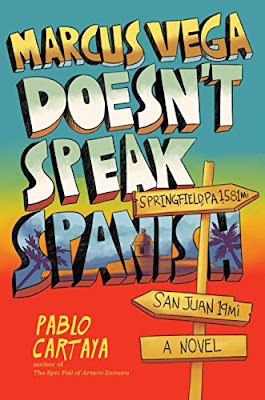 Narrated by a six-foot-tall, 180-pound eighth-grader, Marcus Vega is variously known as the “Mastodon of Montgomery Middle,” the “Springfield Skyscraper,” the “Moving Mountain,” the “Terrible Tower.” You get the picture. “Most kids clear out of the way when I walk down the hall,” he tells readers.

Knowing how hard his single mom works to support him and his younger brother and how she worries, Marcus uses his size to build what becomes a booming “profit center”—for a small fee (which he secretly stashes into his mom’s Cookie Monster jar), he provides a “walking service,” protecting a group of kids from bullying as they go to and from school.

Marcus for sure does not fear bullies and, in fact, makes a point of not taking short cuts in order to avoid them. This does not sit well with a notorious bully, who particularly aims his ire at the seemingly most vulnerable, including Marcus’s younger brother, Charlie, the first kid with Down syndrome to attend Montgomery Middle. When the bully pushes Marcus to the brink by calling Charlie the “R” word, Marcus slams him—and gets suspended.

Marcus and Charlie are very close, and Charlie is a refreshingly well-developed character. Like many children with Down syndrome, he is outgoing, cheerful, likes to joke around with his friends and relatives, has favorite stories and TV programs, and is liked by his teachers and the other students. His mixed program of general education and special education classes includes speech therapy, occupational therapy, physical education and art; and while Marcus does homework during his brother’s sessions, he does not hover.

Marcus’s and Charlie’s mom works as an airline gate agent, sometimes morning and sometimes night shifts. While she refers to her sons as her “all-star team,” she stresses about income and not having enough time with them.

In order to “regroup,” mom decides to take the boys to Puerto Rico for spring break—where the boys were born, and to reconnect with their absent dad’s side of the family. For Marcus, it may be a chance of finding and getting to know his father. (Unanswered emails are an indication for readers that this reconnection may not go well, but they’re no clue for the ever-hopeful Marcus.)

Unlike his dad’s Puerto Rican relatives, and his mom, who is not Latina but is a fluent Spanish-speaker, Marcus, who was born in Puerto Rico but doesn’t speak Spanish, wonders if where he’s from determines who he is.

As mom and Marcus and Charlie reconnect with their large, exuberant Puerto Rican farm family, they see “corridor after corridor” of gardens everywhere, and each garden has its own story: when and why it was built, whose responsibility it is, what it grows—tomatoes, yucca, a guanabana tree, achiote. Or, as Marcus notes, “the theme is weird-looking fruit no one has ever heard of … Nobody in my school would go near these.”

Here, the boys learn about the realities of farm life—everyone works hard and there are few complaints. Tío Ermenio explains, for instance, that when the toilet is flushed, the shower turns freezing cold.

And when a problem arises, everyone knows what has to be done and someone does it. After a sudden, loud gunshot “cracks the air and echos through the mountains,” Tía Darma returns, hands her large pistol to someone, and comments about the weather before she matter-of-factly tells the stunned children that she has just “said good-bye to a sick cow.”

Yet, despite the incomparable beauty of the land and the generosity and humor of his Puerto Rican relatives, our city-boy Marcus remains non-plussed: “A sleepover at our cow-murdering great-aunt’s farm in the middle of nowhere with little singing frogs ‘co-keeing’ everywhere. What’s not adventurous about that?”

Marcus’s father turns out to be the reason no one talks about him. He’s a self-involved jerk who probably never thought twice about abandoning his family.

Five days later, Marcus, Charlie and mom have returned. As Marcus pores over the many photos he had taken and emails them to a friend, he chooses a file name: “Familia.”

Marcus is changing. His familia has changed him. He’s more thoughtful. He likes to “visit the bodega next to the train and say hola to the lady at the counter. She speaks Spanish too fast, but I’m learning to understand her better.” He takes photos of “everything that makes up this tiny town that’s forty-five minutes from a big city and four hours away from an incredible island.”

I think of the book Charlie picked up at the airport, Proud to Be Boriqua. The author writes about the little singing frogs that I heard on Darma’s farm. The coquí. He says, “Soy de aquí como el coquí.” It literally means, “I am from here, like the coquí.” From Puerto Rico. He belongs somewhere. I’ve been feeling the same way. I won’t be croaking songs into the night like the tiny little frogs do. But it’s nice to feel like I’m finally part of something that’s way bigger than me.

With spot-on code-switching and non-italicized Spanish words and phrases, and with clearly transmitted dichos—traditional, usually rhyming, “sayings” that hold encoded teachings—Marcus Vega Doesn’t Speak Spanish is a deeply satisfying story of family relationships, of growing up, of coming to know who you are and where you fit in. Marcus doesn’t speak Spanish yet, but, in his time, he will. And for now, he understands it.

Abuelita full of life / llena de vida
Abuelita's Heart
Abuelo vivía solo / Grandpa Used to Live Alone
Adelita: A Mexican Cinderella Story
Agua, Agüita / Water, Little Water / At Achichipiga At
Alfredito Flies Home // Alfredito regresa volando a su casa
All Around Us
All the Stars Denied
All They Will Call You: The Telling of the Plane Wreck at Los Gatos Canyon
Alma y cómo se obtuvo su nombre // Alma and How She Got Her Name
Alphabet