Tiny Travelers is a fun series of board books for travelers of all ages. Aimed at young audiences from preschool-grade 3, readers voyage to different countries and are introduced to various cultural traditions, culinary histories and a sense of geographical places worth visiting.

For my own tiny travel, I chose to read Mexico and Puerto Rico. The authors and illustrators introduce both countries in captivating ways that invite youngsters to take in and embrace the cultures. Each spread contains information presented in one or two quatrains, along with a small “did you know?” fact and a “can you find?” question that engage young readers to connect more fully with the cultures. In addition, this design uses a minimum of space that allows plenty of room for the bright, vibrant digitally “painted” illustrations. 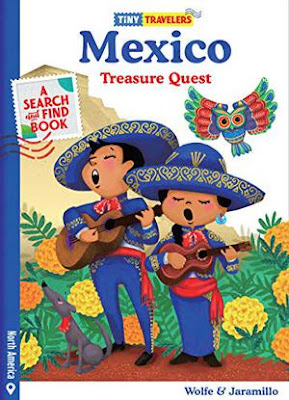 Mexico begins with a map of the country and lets children know that the quest is not for gold “but another special kind.” Given Mexico’s colonial history, this is a subtle reminder of the past, something that older students can research. Moving forward in curiosity and celebration exhibits page upon page of bright illustrations with multiethnic children of varied complexions interacting in diverse parts of Mexico. Emulating the “Where’s Waldo?” concept is an indigenous dog—“xoloitzcuintli”—who can be found on just about every spread.

Youngsters learn about traditional foods, cultural icons, music and famous places in Mexico. (And it’s also refreshing to see tiny details that Mexican children will note, such as a girl mariachi.) Throughout the text, connections are made with various cities or regions that invite further investigation later. The final pages include a world map that puts Mexico in context with the rest of the world. This book was an engaging read for this aging “tiny traveler.” 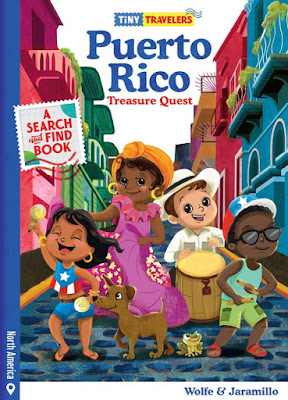 From Mexico, this traveler flew to Puerto Rico. As with Mexico, readers learn easy Spanish greetings and are transported to the capitol, San Juan, for a celebration. The legendary monster, “Vejigante,” shows up a few times and, of course, everyone is partying and he’s one of the musicians. But just in case, the text reads “If you see a monster, don’t be afraid! People love wearing masks of the Vejigante…”

The repeating cultural motif—on every spread—is PR’s beloved national symbol, the tiny coqui (whose loud, chirping call sounds like its name), hiding out, partying, sunbathing at the beach, watching TV, flying a kite… I’m reminded of a dicho: “Soy de aquí como el coquí.” It literally means, “I am from here, like the coquí.”

The nearby island of Vieques lends a note of local biological beauty with a bioluminescent bay. This occurrence is in direct contrast with the island’s colonial history of the United States military presence, so is a welcome natural beauty addition. The reader continues discovering beaches, “coco frios” (cool coconut juice), culturally relevant sports such as boxing and outdoor spots for kite-flying such as El Morro on San Juan Bay.

My one suggestion for this series is that the names of places visited be included on each map. Map searching is less important for the preschoolers, but second-and third-graders could happily cross-reference towns on the map.

Although both Mexico and Puerto Rico follow a formula in describing the places and cultures, there is little that is formulaic in the Tiny Traveler series. Rather, as these gorgeously illustrated board books introduce young people to each place and culture, they nurture a healthy curiosity and encourage youngsters to want to know more. As well, Mexican and Puerto Rican children will see themselves as belonging to a land that is part of their own rich heritage. This series is highly recommended.