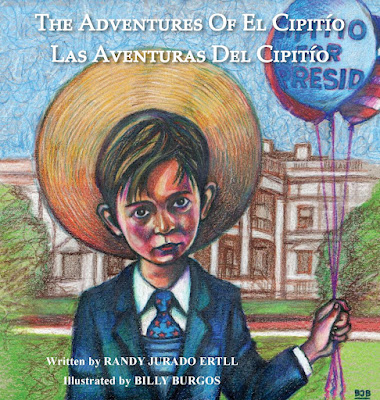 El Cipitío (from the Nauhuatl “cipit” or “capote” for “kid”) is a Nauhuatl character, an eight-year-old (or so) boy who was cursed to remain a kid for eternity. His belly is oversized and his feet are backwards, with his toes pointing behind him. He wears a huge hat and nothing else. He is a trickster, especially targeting women. Cipitío stories are generally told by parents to scare kids out of doing unsafe things.

Jurado Ertll’s version of “Cipitío” is a kinder, gentler little dude. He’s leaving his home country of El Salvador “to seek a better future” in the US and to bring peace to his country. He is fully clothed. No backwards feet. No oversized belly. No tricks. “Cipitío” just happens to be his name.

The hand-drawn cover illustration shows a boy standing in front of the White House. With a somber expression, he looks directly at the reader. Although he is Salvadoran, he wears a huge Mexican charro sombrero (which culturally appropriates a Mexican icon) and a three-piece suit, and holds a string of balloons, one of which says “Cipitío for President.” Cipitío wears his sombrero everywhere, including in the library—where any librarian would make him take it off—and even after he’s been elected President of the United States.

There’s no mention of how “Cipitío” got into the country. Did he fly? Did he come in a caravan? Did he cross the border legally or illegally? He doesn’t speak English, and, for no apparent reason, his teachers tell him that he and his family will be arrested and deported. Nevertheless, he travels the continent, from Guatemala to México to the U.S, ending up in South Central, Los Angeles, where he begins to learn English. Cipitío tells young readers:

I will graduate from elementary school, middle school, and high school. I will attend great colleges and universities. I will prepare myself to be a well-rounded leader who can speak with the poor and the rich, and treat all with dignity and respect.

These are admirable goals that have been achieved by millions of immigrants, including our DACA young people. But there’s no effort here to connect with the lives of real people. Rather, the story reads like a to-do list with nothing to show how Cipitío did it: no harrowing experiences, no explanation, no feelings, no passion.

Although Cipitío becomes a “social justice activist,” there’s no description of his activism. He runs for mayor, campaigns to be President of the United States—and wins—after which, he dances to La Bala.

Apparently, the author wants young readers to know that a Latino can become a U.S. President—which is a good thing—but there’s nothing about how Cipitío did it. Rather, the story is essentially a recitation of the Great American Myth.

The Spanish translation is good, but there’s no real story here; especially since it’s originally about a trickster, which Jurado Ertll’s character is not. (It might have been fun to have seen, for instance, how El Cipitío was able to trick someone into nominating him for office.)

In the final illustration Cipitío, in his suit and sombrero, is dancing with his young friends. The song is about dancing to dodge the bullet (which is a metaphor for the danger of being an immigrant), but there’s no story to give root to the metaphor.

Although The Adventures Of El Cipitío / Las Adventuras Del Cipitío might interest very young children, there’s not much here that would resonate with older readers.