I recently came across a flier in an old backpack of my daughter’s: Wanted: Committee Chairs for this Spring’s Cinco de Mayo All School Celebration. It was replete with cultural props, including a sombrero, cactus tree, donkey, taco, maracas, and chili peppers. Seeing this again brought back the moment when, years earlier, my daughter had handed the flier to me: The local elementary school’s PTSA, in an attempt to provide a “multicultural experience” for students and families, was sponsoring a “Mexican-American” event. But, since there were no Chicana/o students, parents, or staff members in the school community (as far as I knew), it seemed that the PTSA was likely to get it wrong. I was concerned.

After making some inquiries, I was told the school wanted to celebrate El Cinco de Mayo because it was Mexico’s Independence Day. However, El Cinco de Mayo is actually Battle of Puebla Day, commemorating the defeat of Napoleon III in 1862. Mexico’s Independence Day is September 16. Concerned that the stereotypes associated with Chicana/os, such as fast-food items, piñatas, sombreros, and serapes would be central to the event, I wrote the school, asking if they might consider canceling the event. They didn’t, and I was correct.

El Cinco de Mayo is celebrated in the US more than in Mexico, where these celebrations are common only in the state of Puebla, about 100 miles east of Mexico City. Naval forces from England, Spain and France had traveled to Mexico to collect on various financial debts. While England and Spain quickly settled their conflicts and left, France—assuming an easy victory and the establishment of a French colony in Mexico—stayed to fight. On May 5, 1862, the poorly armed and greatly outnumbered Mexican army rousted the occupying French forces. Although there is limited recognition of this holiday throughout Mexico, the Battle of Puebla remains a source of pride.

During the 1960s, civil rights protests and other activities were strengthening cultural ties between Mexicans, Mexican Americans and Chicana/os. More than 100 years after the Battle of Puebla, El Cinco de Mayo was embraced as a new US-Mexican holiday.

The food and liquor industry quickly commercialized the holiday, and in the US, El Cinco de Mayo has become an excuse for Corona and Dos Equis beer companies to improve their market share. Bars offer half-price margaritas and Tex-Mex fast-food chains see an increase in sales while sombreros and piñatas fly off the shelves of big-box party supply stores. Chicana/o youth are exposed to strong alcohol marketing campaigns with damaging stereotypes. Some groups have resisted, sponsoring El Cinco de Mayo con Orgullo (El Cinco de Mayo with Pride) celebrations. These alcohol-free events focus on heritage and empowerment rather than on Mexican hat dances and drinking games.

Cartoon Characters and Other Stereotypes

The PTSA sent a Cinco de Mayo flier home asking for parent help with the celebration: Wanted to borrow: coloring books, and kids’ picture books with a Mexican/Latin American theme. Some books to look for might be ones with characters Speedy Gonzalez, Yosemite Sam, Road Runner, etc. I learned they wanted the books to put on overhead projectors so they could trace the images on wide butcher paper, have the students color in these images, and tape the “El Cinco de Mayo murals” to the walls of the school’s main entrance.

I spoke with a school administrator about Speedy Gonzalez, the Warner Brothers’ Looney Tunes cartoon mouse. I recalled the phrases he often spoke, mostly “¡andale!” and “¡arriba!” Speedy, the “fastest mouse in Mexico,” played tricks on Sylvester the Cat, getting him to eat large quantities of hot sauce. He referred to the cat as “El Gringo Pussygato.” Speedy’s cousin, the gun-carrying Slowpoke Rodriguez, was the “slowest mouse in Mexico.” Slowpoke and Speedy’s other cousins were shiftless and lazy and frequently appeared inebriated. I questioned these “Mexican themes” and I also questioned others on the list, such as Yosemite Sam, the large mustachioed gun-toting prospector in Bugs Bunny cartoons and the Roadrunner of Wile E. Coyote fame. The administrator told me that these two characters “lived in the desert” and that “Mexican Americans live in the desert.” Although I documented the fact that more than 90% of Chicana/os live in cities and towns, the celebration proceeded as planned.

The week before the event, I received a phone call from the PTSA coordinator, who wanted my help: She wanted to know if I knew anyone who could “do the Mexican hat dance.” I’m not kidding. No. I did not.

When I shared this story a few years later in my teacher education course, Rosa, a student who came from Mexico, asked why her culture was portrayed this way in the US media and in schools. She was surprised at how El Cinco de Mayo was represented as a drinking holiday, and disturbed that schools reinforced stereotypes about Mexicans. In the discussion that ensued, the other students asked many questions of Rosa. Of course, I wanted to make clear that one person could not represent an entire culture, but I was eager to see where this conversation might lead.

The students were astonished that Rosa didn’t know what a burrito was. After researching “burritos,” they found that the typical large, overstuffed, high-calorie burrito, including the breakfast burrito, is a US creation and the smaller meat and vegetable burritos are popular in northern Mexico. Rosa is from Mexico City, in central Mexico—not a place where burritos are eaten. One of my colleagues, who is from Puerto Rico, suggested I tell my students that, “food stereotypes are a big deal. I can’t tell you how many times I have been asked if I miss tacos from home. We do not eat tacos!”

Rosa said she did not encounter piñatas at parties she attended. They are rare and typically not in the shape of donkeys, she said. In the 16th Century, Catholic missionaries had piñatas as part of a conversion process for Lent; they were either seven- or nine-point stars or heavily decorated clay pots. The vessels were filled with trinkets, food, or jewelry and represented the seven deadly sins.

Rosa said she did not wear white dresses with red flowers across the bodice, similar to what tourists buy from street vendors. Rather, she wore the same clothing and probably had similar academic and social experiences as my other students. Rosa told my students that Mexico has a tremendous diversity of languages, dialects, cultures, and politics, as well as rural and urban differences. She also pointed out that Mexican-American cultures have the same complexities.

Rosa asked if anyone had been to a Día de los Muertos celebration. Everyone who had taken a high school Spanish language course had done so; yet, aside from sugar skulls, altars, and “something about death,” no one could describe the event. Rosa said that Día de los Muertos is a day to honor friends and family members who have died. Stories are told, grievances settled, and music is performed in homes or cemeteries, depending on the region and the families’ traditions.

Rosa said that the “Spanish class” celebrations offer little more than a party. Without being tied to cultural norms and practices, this event loses its deep meaning and perpetuates the idea that Chicana/os are exotic, strange, and party in cemeteries.

Coming from a farm labor family, Alberto knew firsthand the issues of unfair and dangerous labor practices. He supported the United Farm Workers and had invited César Chávez to campus in 1993 to speak about the national table grape boycott. He knew that many people in the US were more familiar with Speedy Gonzales than with César Chávez or UFW co-founder Dolores Huerta.

As a class project, I asked my teacher education students to define the difference between the tourist approach to multicultural education and a genuine anti-oppression approach. I assigned a variety of articles on the salient differences. The students designed two curriculum plans on Chicana/o issues that illustrated the different approaches, including learning objectives and course outlines. First, they created a weeklong curriculum that incorporated stereotypic characterizations of Chicana/o culture and history, emphasizing dance, food, and festivals; and designed fliers with cultural props for a hypothetical school celebration. In a follow-up discussion, students realized that this approach felt familiar—it was the easy approach to multicultural education taken by many schools.

The anti-oppression curriculum included Chicana/o speakers discussing issues of discrimination they had faced, as well as research papers using the UFW website and other online resources. Films such as “Walkout,” about the 1968 student demonstrations for better schools in Los Angeles, were included.

As a capstone experience, I asked students to examine textbooks, workbooks, and children’s picture books for stereotypical Chicana/o images. They wrote to various media, citing these false characterizations, and including suggestions for improvement. The students also wrote to the publishers that had produced these materials and received responses from some authors and editors, who said they were committed to making changes in future editions.

Some students looked at current and past marketing techniques of fast-food restaurants—such as Taco Bell’s Chihuahua demanding more tacos—(!Yo quiero Taco Bell!) and Taco John’s “Whiplash,” the sombrero-wearing monkey—and wrote to these companies. They also wrote to Oriental Trading, a mail-order catalog that offers more than 100 items for Mexican “fiestas.” A photograph in the catalog features a man in a serape holding a gun. Some students also visited Halloween supply stores to examine costumes. The class “favorite” was the “Sexy Shooter,” a sombrero wearing, scantily clad barmaid. The investigative possibilities for students are endless: A flier for a Spanish language class on my campus currently hangs in several hallways in my building. Images of Chicana/o stereotypes create the border for the flier.

Attempting to Get It Right

As anti-oppression multicultural education becomes better defined, we will be more successful in changing our students’ lives. We need more contemporary and complex portrayals of cultures, and one way to assure this is to include people from these cultures in leadership roles on planning committees. And cultural events should take place only in conjunction with a strong, authentic, school-wide curriculum that addresses issues of discrimination and school change. Through sensitive questions, research, community involvement, friendship—and humility—teachers, administrators, and parents can get it right.

El Cinco de Mayo has just passed, and the Internet is awash with “lolcats.” Wikipedia tells me that “lolcats” are images that combine photos of cats with text intended to contribute humor. It comes from “lol,” which, I’m told, means “laugh out loud,” and “cats.” In this case, the alleged “humor” comes from dressing cats in sombreros and substituting “meow” for “mayo.” This “lolcat” was used ad nauseum on posters advertising animal shelter “cinco de meow” adoption days. There were also “lolcats” pairing “cinco de meow” cats with, of course, José Cuervo; and, in one case, confusing El Cinco de Mayo with El Día de la Raza. Racist, not funny. 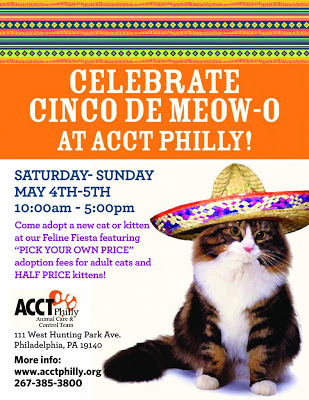 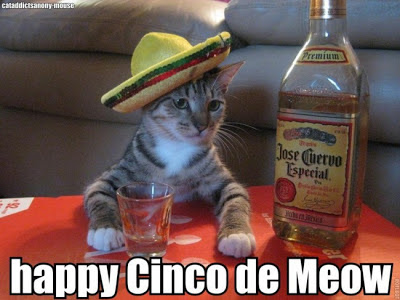 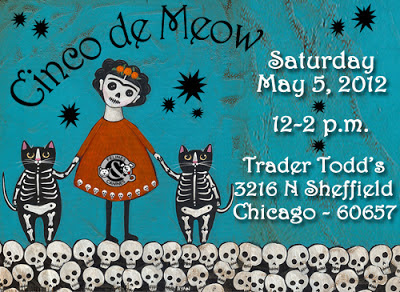