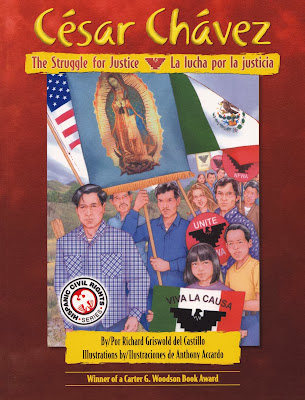 It was 1969, and I remember marching with César Chávez in Delano and in front of the Berkeley Safeway. Everyone was shouting, “¡Huelga! Don’t buy poison grapes!” César was a small man, and sometimes you could hardly hear him. Yet he spoke with such great passion and presence. His power came from within and inspired us and ignited our spirits. Even though grapes were one of my favorite fruits, I did not eat them for years. We were there to support César and the agricultural workers and our movement was exciting and purposeful. For Chicana/o students like me, it was more than the struggle for one group of workers—it was also our struggle to grow our identities and cultural connections.

In simple words and almost-photographic watercolor illustrations, this large, bilingual picture-book biography introduces young readers to the humble migrant farm worker who led the labor struggle that became known as the “fight in the fields”—to secure better pay and working conditions for Raza and other agricultural workers. The design is striking—on each double page spread, the large well-spaced text appears on the left, with full-page paintings on the right. The English and Spanish texts are separated—and yet connected—by a repeating banner of black UFW eagles on a red background.

When I look at Accardo’s boldly colored illustrations, they give me chills. They remind me of those exciting days and of the passion, struggles and triumphs of my people. Here is his mother comforting young César, after he’s learned the harsh lessons of discrimination at school. Here is an older Chávez, studying a book about Gandhi, and leading people on a march, and speaking at a rally, and breaking a fast by accepting a small piece of bread from Robert Kennedy. And here is a depiction of Chávez’s funeral. At the center is a plain pine coffin carried by farm workers. In front is a little girl, sitting on her father’s shoulders. And all around are people and flags—of La Vírgen de Guadalupe, and the UFW eagles, and the American flag. What is especially moving is that, in those paintings where Chávez is leading a march or speaking with farm workers, he is indeed one of them, not separated in any way. This is exactly what our students need to understand—Chávez’s strong connection to the people.

Unfortunately, the narrative (along with the literal Spanish translation) is a historical walk-through; it’s flat and passionless. The sentences are short and choppy, more a recitation of facts than a story.

For example, here is the first paragraph:

César Chávez was a very important Mexican American leader in the United States. He was a man who improved the lives of poor farm workers. He fought to help them get better wages and working conditions. He helped them gain more respect and end discrimination against them. César Chávez organized the United Farm Workers Union to do this. He gave the poor hope that life could be better.


Here, in Griswold del Castillo’s presentation of César Chávez as a larger-than-life leader who “improved” the lives of farm workers and “gave them hope,” the agricultural workers themselves have no agency—no capacity to make their own choices. In reality, César Chávez was a leader of the people. As César organized and encouraged the poorest workers in the country, they took their own power and were able to make significant changes in their lives and the lives of their families.

And in some instances in the narrative—“Working and moving from place to place, Cesar learned how poor the farm workers were”—Griswold del Castillo makes it appear that Chávez is outside looking in rather than acknowledging the first hand experience of his own family as migrant agricultural workers. As it is, the narrative loses the opportunity to tell a rich story.

Nevertheless, César Chávez: The Struggle for Justice / La lucha por la justicia can be used alongside Carmen Bernier-Grand’s César: ¡Sí, se puede! Yes, we can! and Kathleen Krull’s Harvesting Hope: the Story of Cesar Chavez and is recommended.