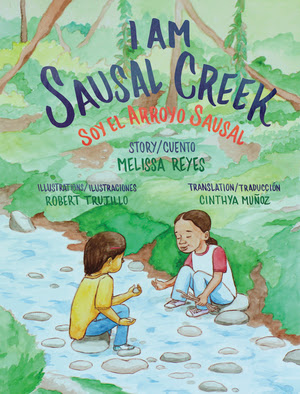 Sausal Creek’s own story flows with a gentle, poetic economy of words in English and Spanish, accompanied by loving, sparse artistic expression. As the creek’s story begins and ends at the same place, so does the text:

Although Muñoz’s Spanish translation captures the written poetic musicality of the English, there are some typos (“escucha” should be “escuchas,” for instance), and some alternatives—such as “si te sientas en silencio” rather than “si te sientas silenciosamente” and “si escuchas bien” rather than “si escuchas cuidadosamente”—might make more sense to hablantes. But either way, the Spanish allows for young readers to follow in both languages.

Trujillo’s pen-and-ink and watercolor illustrations, on a palette of woodsy greens, browns and blues, portray the flora and fauna, and the multi-ethnic mixes of people who have and continue to inhabit this area. I especially like how he’s chosen to show—rather than tell—the positive and negative aspects of the area’s history. Here, in full color, are the Indigenous peoples, living in balance on the land, knowing that all things are related. Here, in stark brown and white, are the “newcomers”—ranchers and their cattle, gold miners, loggers, and later the city with its concrete-filled wetlands—destroying what they have “found.” And here, as people work together, ripping up the concrete dams and digging pools to restore the balance, the color begins to return. And finally, here are two young men, looking down into the water as trout swim around their reflections. As in the beginning—of the story and the creek—all things are related.

Generally, with a picture book, there has to be a narrow focus; and I Am Sausal Creek / Soy el Arroyo Sausal focuses on the environmental destruction and rebuilding of one particular watershed. Here, I like the approach of nature’s being the witness; at the same time, I would like to have had Reyes address—in the text—the human cost as well. To their credit, Reyes and Muñoz pack six pages of historical information (three in English and three in Spanish) into the back matter, so that educators can choose to expand the story.

Young children have the ability to understand complexities, and relate historical and contemporary events such as racism, land theft and even genocide to their own lives. I recommend that educators read and digest Deborah A. Miranda’s Bad Indians: A Tribal Memoir (Heyday, 2013), and visit her blog as well (badndns.blogspot.com). I also recommend, for children, Simon Ortiz’s stunning picture book, The People Shall Continue (Children’s Book Press, 1994). It’s an overview of the histories of Indian peoples in this land, and could be read together with I Am Sausal Creek / Soy el Arroyo Sausal.

With supporting materials, I Am Sausal Creek/ Soy el Arroyo Sausal is a promising debut, and is highly recommended.

Thank you to Oralia Garza de Cortes and Lyn Miller-Lachmann.