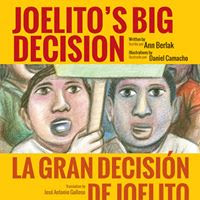 On April 15, 2015—little more than three months ago—about one million people across the country pulled off the largest demonstration of its kind in US history. The struggle, known as the “Fight for 15,” involved Walmart workers, fast-food workers, child care workers, home health workers, janitorial workers, and other underpaid workers—who, along with their many allies—demanded a minimum wage of $15 per hour and union rights for all.

Through the eyes of fourth-grader Joelito Sánchez and his friends, the story shows the impact of low-wage work on the lives of two families, while pointing to the importance of allies in the struggle. To the best of my knowledge, it’s the one picture book that addresses this particular issue in a way that will resonate with youngest readers and listeners.

Joelito, whose mother, uncles and grandparents had been farm workers, is initially unaware of the poverty in his own urban neighborhood. His parents are making ends meet and, along with his sister, the four spend every Friday evening together at their favorite fast-food restaurant. But when Joelito and his family encounter a labor action of underpaid restaurant workers—some of whom are his best friend’s family and some of his neighbors—he learns about the issues and comes to recognize the necessity of standing with them.

While the characters are fairly standard for a picture book, the text flows. In discussions between and among Joelito and his family and friends, and a conversation between a restaurant worker and a reporter, Berlak packs in a lot of information about underpaid workers exploited by arrogant and greedy zillionaire bosses (in this case, the ever-present image of “Sam McMann”), class struggle in general, and the “Fight for 15” in particular.

Camacho’s illustrations, rendered in charcoal and colored pencil on a palette of subdued tones, focus on main characters in the foreground and blend secondary characters, in gray tones, into the background. This technique, which reminds me of the classic Mexican murals, depicts large, round, clearly Indian faces (as opposed to “Sam McMann,” who is ominously pale with ghostly blue eyes). I especially like the panel that shows Joelito, somewhat confused, holding a picket sign, trying to decide between burger and protest. (See below.)

In reality, I’m not sure there would have been this kind of dilemma for a Mexican-American child whose family had been involved in the farm worker struggles and whose friends and neighbors are low-wage restaurant workers. It’s more likely that he would have grown up with his family’s stories of oppression and struggle and now, encountering a picket line walked by his friends and neighbors, would have just picked up a sign and joined them.

Galloso’s Spanish version is idiomatic and smooth flowing, and is satisfying and appealing on its own. For instance, when Joelito asks Mrs. Thomas what’s going on, the English version reads:

Mrs. Thomas said, “We’re picketing to let people know MacMann’s doesn’t pay us enough to support our families. We want fifteen dollars an hour, though even that’s not enough. We should earn enough so we can pay our bills and go on a family vacation.”

(“How good that you’re asking,” answered Mrs. Thomas. “We’ve organized this protest to let people know that MacMann’s doesn’t pay their workers a fair wage. What they pay at MacMann’s isn’t even enough for us to support our families. We want them to pay us fifteen dollars an hour although even that is not enough. All workers should earn enough to pay their bills and have some vacations from time to time.”)