Here are two children’s picture books by the same author. They are almost identical in title, some content and general theme; but much different in concept, approach and overall execution. Although   My Tata’s Remedies / Los remedios de mi tata  appears to be a majorly improved version of  My Nana’s Remedies / Los remedios de mi nana, I’m examining the two titles here because they were published as separate projects. 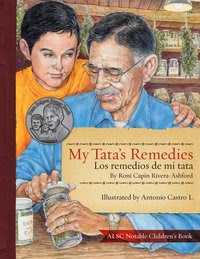 In My Tata’s Remedies / Los remedios de mi tata, young Aaron expresses interest in learning how Tata Augustine (or “Tata Gus,” as everyone calls him) makes his remedies, and the elder curandero decides that this is as good a time as any to begin the child’s education—“poco a poco te voy a ir enseñando qué usar y cuándo usarlo.” He directs his grandson to the shed in which dried flowers hang from rafters, and jars and bags are filled with other traditional medicinals—leaves, herbs and teas—each labeled, sorted and stored in its appropriate place.

As it happens, Tata’s first patient of the day is Aaron, who has hit himself in the forehead with the balero that Tata had given him. With Árnica de la Abuela and Árnica flowers—along with a handclap and a well-known healing rhyme—Tata’s remedy soon has the desired effect.

As each person in the community—relative, friend and neighbor—presents a health problem, Tata tells his grandson exactly what to get and where to find it, and then shows him how a particular herb or tea is used to solve a particular problem. Aaron learns, poco a poco, how to take away a bee sting, how to make feet stop itching, and how to cure diaper rash, burns, eye infections, and even a cold and a toothache. When Mamá and Uncle Mark arrive, they’re invited to spend the night, and Aaron gets to experience yet another cure and some stories from the family’s past. As Tata tucks him in and reminds him of the necessity of practice, Aaron thinks about how fortunate he is to have Tata as his grandfather and his teacher as well: “To have a loving grandfather is like a santo remedio—a magical cure!” / “Tener un abuelo cariñoso es como un santo remedio.”

Castro L.’s realistic and expressive single-page illustrations, rendered in colored pencil and watercolors, complement this authentic and loving portrayal of close family and community ties. Here is a horrified Sara, being stung by a bee. Here is an unhappy Justin, soaking his itchy feet in Creosote rinse. Here is baby Anita, “crying up a storm,” suffering from diaper rash. Here is Malila, in pain from a deep burn on her arm. Here is Rudy, the postman, with a red nose and watery eyes. Here is mariachi José Luis (“Guapo”), massaging his aching mouth. And here is a young child beginning to learn from his Tata how to help people in the community; a kind, generous Tata passing on his knowledge of healing and sharing—while an ever-patient Nana, with a big smile, provides comfort with fresh-baked empanadas and hot chocolate.

The endpapers remind me of earth and roots, and beautifully designed text pages—reminiscent of aged paper on which well-used recipes might be found—extend each full illustration and depict a specific herb with its common name in English and Spanish. As well, the back matter contains a helpful and educational bilingual “Glossary of Medicinal Herbs & Remedies / Glosario de hierbas medicinales y remedios,” in which each illustrated entry has both its common and scientific name in English and Spanish.

The excellent idiomatic Spanish is sometimes translated and sometimes interpreted, so the story flows in Spanish as effortlessly as English. Here, for instance, as Tata intones the children’s healing rhyme, “Sana, sana, colita de rana, si no sanas hoy, sanará mañana” (which translates as, “Heal, heal, little frog’s tail, if you don’t heal today, you’ll heal tomorrow”), young Aaron explains that it’s Tata’s way of saying, “I’ll kiss it and rub it and make it go away. Now that you’re better, you can go out and play!” In the Spanish version, of course, there is no explanation because none is necessary.

Rather than a typical European “beginning-conflict-resolution” children’s story that tells rather than shows, this beautiful book shows how oral teaching of traditional herbal remedies is transmitted across generations of community. 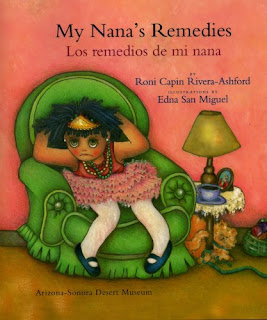 In My Nana’s Remedies / Los remedios de mi nana, there is no community to speak of. All we see of the family are a young unnamed narrator, her unnamed Nana, and her unnamed baby brother, who observes what little action there is. The story consists in its entirety of a list of conditions (“when I have a headache…”) followed by Nana’s cure (“my nana prepares for me…”). Each double-page spread depicts the narrator’s or her brother’s problem (sore throat, sleeplessness, stomachache, headache, chill, and fright) and Nana’s dispensing the traditional or herbal remedy.

The Spanish is grammatical and functional, closely following the English. Except for the next-to-last spread, which has a number of errors. Here, the English reads:

Whenever I don’t feel well, my nana is always at my side.
“I’ll kiss it, I’ll kiss it, and make it go away; then you can go out and play.”

Here, “Sana, sana,” the healing rhyme, which is used by parents and grandparents all over Latin America to take a child’s attention away from a hurt or illness, is confusing; it's neither a translation nor an interpretation of the English that precedes it. Rather, the English, if anything, should have been used to explain the Spanish (as it was done in My Tata’s Remedies / Los remedios de mi tata). And “ahora” should be “hoy.”

San Miguel’s bright and colorful single- and double-page watercolor illustrations may appeal to some children, but they’re cartoonish and jarring. For instance, the young narrator and her little brother have exaggerated expressions and Walter Keane-like eyes, Nana’s eyes are often hidden behind her spectacles, and there’s just too much going on in each illustration. In addition, some of the pictures are confusing: the narrator’s “little baby brother,” on one page, is an infant; a few pages later, he’s about three years old; and on a later page, he’s a toddler.

In Mexico, the southwestern US, and all over Latin America, curanderas are important and esteemed community members who practice and teach traditional and herbal cures to everyone, not just to their immediate families. But here, on a close to last spread, our young narrator (who is finally smiling) says, “How lucky I am to have such a special nana! She is my very own, personal healer.” (“¡Qué fortuna tener una nana tan especial! Ella es mi curandera personal.”) Except for information about specific traditional cures, there is no story here—no cultural teaching—and, unlike My Tata’s Remedies / Los remedios de mi tata, there is no relationship with the community. Many lost opportunities here; My Nana’s Remedies / Los remedios de mi nana, the earlier version, is marginally recommended.