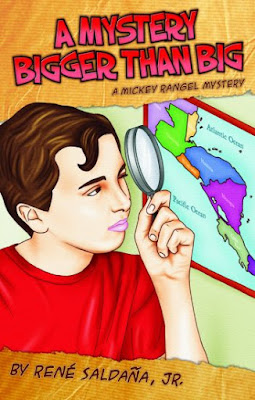 Mickey Rangel is the real deal, a smart, wise cracking fifth-grader; an honest-to-goodness detective with an identification card in his wallet and an on-line certificate on his wall to prove it. And he’s already solved several cases—The Case of the Pen Gone Missing / El caso de la pluma perdida (2009), The Lemon Tree Caper / La intriga del limonero (2011), and The Mystery of the Mischievous Marker / El misterio del malvado marcador (2013).

In this new mystery, everyone’s talking about Natalia, who’s just arrived at school. She’s too skinny. Her clothes are worn and shabby. At lunch, she eats too quickly. She sits at her desk too quietly. She doesn’t interact with anyone, never smiles, and never even looks up. Who is this skinny, raggedy, quiet girl? Where is she from? What is she hiding?

Rumors are flying: Maybe her parents were Russian spies who ended up in Siberia. Or maybe they were killed in a plane crash and she was the sole survivor. Or maybe her father was a Mexican drug lord and she’s in the Witness Protection Program. Or maybe she’s an escapee from the circus or from some kind of asylum. She could even have been abducted by aliens and eventually returned. What’s her real story? Mickey, goaded on by his arch-nemesis, Bucho, is determined to crack the case.

Mora’s attractive pen-and-ink illustrations complement the text and add to the suspense. Here is the sad, too-thin Natalia, sitting at her desk, staring off into the distance. Here is Mickey, studying Natalia, daydreaming about solving the mystery, and eavesdropping on conversations. And here is Bucho, the school bully, confronting Mickey. Without sacrificing the detective’s hard-boiled narrative, Villarroel’s engaging Spanish translation in this bilingual flipbook maintains the pace and suspense of the English.

While the earlier Mickey Rangel stories are fun and appealing, what makes this fourth mystery different from the others is the immediacy and importance of the subject and how effectively it is relayed to intermediate readers.

When Mickey first sees a news report about children from Central America who left their families behind to come to the US, he’s perplexed. How can children just leave? How can their parents allow them to? What happens to them? How is any of this possible? “Times are desperate,” his father tells him. Soon after, in a class discussion, Bucho relates a heartfelt story about his grandfather’s difficulties when he came here from Mexico. And Mrs. Garza, after reading a picture book to the class about a harrowing journey of a boy and his father, discloses to her students that her father also came here. Those were difficult passages and desperate times, just like now. And Mickey makes the connection between the skinny new girl and what she is going through: Natalia has become one of the countless, unaccompanied children from Central America, fleeing for her life to the uncertainty of El Norte.

She had left family behind, I’m sure of it. She had traveled such a long and hard way already. And I was certain her journey was not over yet.

Thinking about her and my silly attempt to discover her identity, I hoped for two things: one, that she would one day get to the place where she might eventually begin to smile again; and two, that she understood I was sorry for having hurt her like I did.

In the context of a well written, fast moving school mystery, A Mystery Bigger than Big / Un misterio más grande que grandísimo is an excellent discussion about the difficulties of immigration and the dangerous lives of children—often without their parents—struggling to get to a safe place. It’s highly recommended.