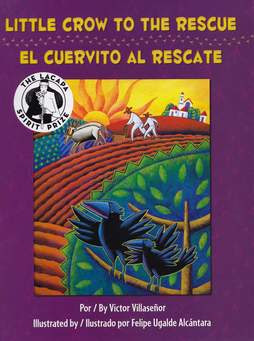 When a boy becomes frustrated because crows are stealing the chickens’ corn, he asks his father why the thieves fly off before he can catch them. So Papá, as usual, answers his question with a story. This one, passed down from the boy’s great-grandfather in Mexico, is about a crow who teaches his son the reason that birds fear humans, and to fly away when they see a human pick up a rock. As the young crow listens to and learns from his father, “he [thinks] really hard and [watches] the farmer and his son”—and “has the biggest, brightest idea that he had ever had!”

It’s not hard to imagine a classroom full of kindergartners shrieking with delight at the young crow’s father’s announcement of his son’s brilliance and everyone else’s joining in:

“My son is a genius!” he crowed. “He has taught me something new! From now on, when any human approaches any of us, fly, fly away as fast as you can even before he bends down to pick up a rock because he might already have it in his hand!”

“There’s a genius among us!” other crows crowed in loud, shrill voices…. This message was so bright and new and marvelous that from valley to valley all the crows shouted it, cawing with their best and loudest voices!

Ugalde Alcántara’s brilliant color and bold images are reminiscent of the artwork of the early Mexican muralists. In the bright, sunlit fields, everything—from the blue-purple-black crow feathers to each yellow kernel of corn—is outlined in an opposing color against a subtly layered background, and the rows of crops in the fields become curved as they reach the horizon. A small image that reflects the story separates the Spanish and English passages on each left page. While most of the single-page, full-bleed illustrations on the right depict both human and crow characters, the two species are never shown in close proximity.

Cummins Muñoz’s colloquial Spanish translation flows smoothly and effortlessly, following the English in its storytelling rhythm. In some cases, the Spanish is actually preferable in its pacing to the English. For instance, when the farmer throws a rock at the crows, the English reads: “The big stone came flying fast and hit the tree the crows had been sitting on with a bang!” And the Spanish reads: “La piedrota voló bien rápido y ¡zas! chocó con el árbol donde habían estado sentados los cuervos.”

Towards the end of the story, the young narrator says, “Like many of his stories, Papá had learned it from his mother, Doña Margarita, who had learned her stories from her father, a powerful Indian from Mexico.” The facing illustration shows Margarita as a child, looking up adoringly at her strong Indian father. My guess is that Villaseñor never knew his great-grandfather’s name or tribal nation, and I would like to have seen something about this in his biographical note.

In this beautifully illustrated, captivating story within a story that begins and ends with the same question and answer—and examines the interdependence of humans and animals—the message that will especially resonate with young readers is how children can sometimes teach their elders a thing or two. Little Crow to the Rescue: El cuervito al rescate, which was awarded the 2007 Lacapa Spirit Prize, is highly recommended.