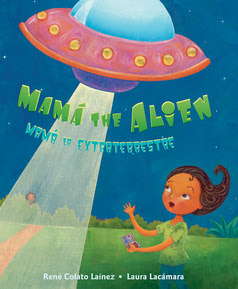 In Mamá the Alien / Mamá la extraterrestre, young Sofía accidentally knocks over her mama’s purse, spilling out its contents. When a resident alien card drops out, the child discovers (she thinks) that mom must be an alien from outer space. Since her parents’ explanation doesn’t yield any usable information, the child does the research and the math and puts the puzzle together:

It’s only after 23 pages that Sofía discovers the term “alien” has more than one meaning (“alguien de otro planeta o alguien de otro país”) and becoming a US citizen is easy and equally attainable by all. And that’s this story’s fatal flaw. While Colato Laínez’s writing is humorous and endearing, his Spanish translation is very good, and Lacámara’s bright, acrylic-and-collage artwork is appealing, the story ignores the inequities and dangers that immigrant and refugee children and their families must endure, and glosses over the issues of who gets to become a citizen and who doesn’t.

Mamá the Alien is sure to resonate with well-meaning teachers and librarians looking for picture books that are relevant to contemporary issues. And Mamá the Alien will surely be a hit as a read-aloud in bilingual early childhood classrooms. No doubt, refugee children will sit, heads down, confused and shamed and not understanding why.

We are living in a scary, dangerous time. Especially for undocumented children and their families, this fact cannot be disputed. Confused, scared, unaccompanied children who are running for their lives—to get to the “safety” of El Norte—more often than not find themselves in detention centers, waiting for strangers to decide their fates. And others may hide for years—sometimes with extended family members who live in the US—in fear of being caught and sent back. Their lives must be kept secret, even from their classmates and friends. The same issues come back again and again and again and again.

Immigrants with papers, on the years-long road to US citizenship, don’t have it easy either. Job and housing discrimination, and verbal and physical attacks by xenophobes, are common. Both documented and undocumented individuals and families are often insulted as “aliens,” and even, “illegal aliens.”

Children who are not enmeshed in this difficult life, whose citizenship has never been questioned, need to be taught to challenge these inequities. They need to be taught to recognize the pain and call out those who demonize immigrants and refugees, and to become allies in what might seem to be an impossible struggle. The conversation is necessary. It’s beyond excuses.

The publisher’s note enthuses, “The book’s bilingual text makes it an especially good fit for English language learners who may struggle to find books that reflect their experiences,” and Mamá the Alien has garnered raves from the major review journals. As the Booklist reviewer wrote, “[this] heartfelt and humorous story is perfect for primary-school readers, as well as a useful way for parents or educators to introduce the topic of immigration.” And the Kirkus reviewer called it “a delightful, original, clever, purposeful, multicultural alien tale.” Unfortunately, all are missing the point.

While I do not doubt the good intentions of the author and illustrator, both of whom are immigrants, Mamá the Alien / Mamá la extraterrestre trivializes the pain that so many children and their families undergo and makes light of migration issues that have yet to be resolved in this country. It cannot be recommended.