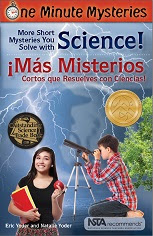 This fourth in the One Minute Mysteries series, and the first in both Spanish and English, contains most of the short mysteries found in the previous three English editions.

The project began, as the foreword describes, as a series of father-and-daughter activities in which Eric wrote, Natalie rolled her eyes, Natalie wrote, and the two wrote side by side. Eric’s vision was “to emphasize (science’s) widespread, real-life applications,” and Natalie’s was “to (keep) the behavior and dialogue of the characters authentic.” Natalie writes that their technique involved, in part, “(staring) at a dead spider on the ceiling above my dad’s desk for hours and hours.” This approach apparently worked—very well.

For youngsters, these challenging problems open up both discoveries and potential for curious, inquisitive minds. And that these 45 pint-sized “mysteries”—covering Life Science, Earth and Space Science, Physical and Chemical Science, General Science, and including a Mathematics Bonus Section—are both encountered and solved by children themselves make this volume both fun and accessible.

Among my favorite brain-teasers is “And They Call This a Fair / Feria de cuadritos,” in which Kendall and Ruby construct a game for the science fair, in which they lay out 20 cardboard rectangles measuring 2” x 3” each. The problem is to arrange the rectangles in a way that will cover the most area. (This one stumped me for a minute, until I figured out that “area” does not necessarily mean “contiguous area.”)

But my hands-down favorite is “Think Outside the Box / Piensa fuera de la caja,” in which Axel has forgotten that his science project—“to construct and label a model representing either a plant or animal cell, describing the functions of at least four parts of the cell”—is due in ten minutes! And all he has is pizza scraps and an almost-empty pizza box! Can he do it? Of course he can! (Although this kind of construction is not easily replicable—you’d need to have the right kind of pizza, eat almost all of it, leave the correct scraps and use every second of your ten minutes—it’s a hoot!)

The book design is clear and the text is readable, without illustrations or clues to detract from each “mystery.” The problems are presented in English on the left and Spanish on the right and generally headed by puns in each language to grab attention. The images—black-and-white photos and drawings—are appropriately reserved for the “solution” pages: those on each two-page spread are related to each other so young readers can intuit more than one connection between image and solution. While it’s obvious that the authors used great care in choosing the photos of both children and adults who represent a diversity of age, ethnicity and gender, I would like to have seen representation of children and adults with disabilities and the spectrum of family configurations as well.

Bachelet’s colloquial Spanish translation reads well, and this layout of the mysteries and solutions enable English-speakers, hablantes, and bilingual students to work in the language in which they’re most proficient, and look to the other side for corresponding words, phrases, and particular idioms that interest them.

Engaging and fun for both science- and math nerds (and their parents, if permitted), as well as  youngsters who could benefit from some time away from video games, One Minute Mysteries: More Short Mysteries You Solve with Science! / ¡Más misterios cortos que resuelves con ciencias! is highly recommended.