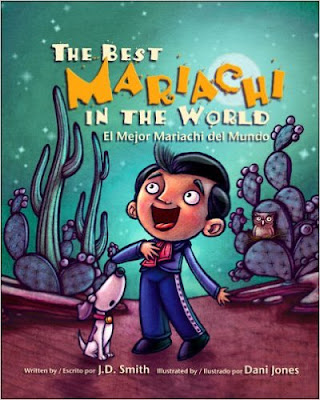 This title was published in hardcover and paperback, in English-only, Spanish-only, and what the publisher labels “Bilingual—with mostly English and concept words in Spanish formats.” (For those who may not know—apparently including the publisher—a bilingual book contains the complete text in two languages.)

Summary: “Gustavo wants to be in the family mariachi band [sic], but he cannot play the violines [sic], trumpets or guitars. He finds his place in the band with his singing talent.” The book’s message is something about a little kid (literally) “finding his voice.”

This book seriously downplays the role of nurturing in a large extended family. Mariachi groups are often family-based, cousins, uncles, aunts, grandmothers, grandfathers, all training the future generation of musicians. Think of the Trio Los Panchos—they’ve been around for over 50 years and are now composed of grandsons of the original mariachis.[1] This takes work and dedication and teaching from an early age. None of this is shown in Best Mariachi, and that is its fatal flaw: it totally negates the role of family in Mexican culture.

The story begins on this depressing note: “Gustavo was the worst mariachi in the world.” In the first illustration, Gustavo—dressed in a green t-shirt and brown pants, hands in his pockets, eyes cast downward—stands sorrowfully in the middle of his (male) relatives who are dressed in mariachi outfits and happily playing mariachi instruments: violín, trompeta, and guitarrón. The only one who acknowledges Gustavo’s existence is the dog at his feet. 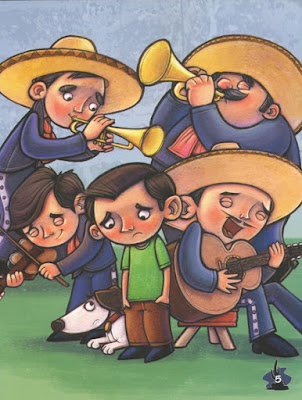 Although Gustavo dreams of becoming a great mariachi, recognized and applauded by everyone, young readers find out that Gustavo is the “worst mariachi” because none of his mariachi relatives—his father, his uncle, his brother, even his cousins—will let him as much as touch their instruments, so he cannot even learn to play.

Let’s stop here for a moment. This story stretches credulity and completely obscures the reality. Any Mexican or Mexican American mariachi family (or any musical family) would be delighted to encourage their children to learn the music—as well as traditional, historical and contemporary songs—and to learn to play whichever instruments suit them. There would be lots of hard work to accomplish the goal of becoming a mariachi: lots of learning and lots of practice, probably after school and homework; and maybe even working a part-time job to save money to purchase the instrument and fabric for the outfit. The whole thing might become a family or community project in which the child learns many things about history, music, study, work, and economics. That would make a good story.

But here, young, sad and alone, Gustavo goes out into the desert each night to sing. At first, he is hesitant, and then, little by little, he gets more confident and sings louder as “he sings all the songs that he knows as well as he knows his own name.” After a while, the townspeople hear his voice, loud and clear. They applaud. They say he is a “true mariachi—the best mariachi in the world.” His cousins carry “the best mariachi” home to an “enormous breakfast” consisting entirely of a huge plate of what appear to be plain tortillas. Served by someone wearing a chef’s outfit. Oh, well.

Jones’ gouache, oil, and colored-pencil illustrations complement the stereotypic story. With very small differences, all of her over-the-top cartoonish characters look alike—exaggerated, oversized heads and small bodies, dark complexions all the same shade of brown, expressions denoted by closed or bugged-out eyes and wide open or curved-downward mouths. As well, the limited palette of background colors—mostly bright turquoises and blues, browns, greens and purples—seems to be a weak, half-hearted attempt at Mexican sky, desert flora and fauna, and adobe.

Last year, I viewed an amazing 2013 performance by Mariachi los Tigres, students from Stephen F. Austin Middle School in San Antonio.[2] Here was a group of talented, disciplined, practiced, joyful young people, full of pride and community esteem, performing instrumental and vocal solos, revolutionary corridos and popular songs. Towards the middle of their performance, their teacher asked the parents and other adult community members to stand and receive applause for their hard work and dedication. Then all acknowledged the children for maintaining their grades and good citizenship before engaging in the “fun stuff” of playing mariachi music. Love spread all around. This is what community is about.

All of this is what’s missing from The Best Mariachi in the World // El Mejor Mariachi del Mundo. Mariachi family members who won’t let a child touch their instruments. A child left alone with no one to help him realize his dreams. So he accomplishes all this on his own. And becomes the best.

No one was there to play. But he had to stand up and sing. He had to cantar.[3]

Since “cantar,” above, is an infinitive, the (incorrect) English translation would be, “He had to to sing.”

“Hmm,” Gustavo thought, “I want to be in the band—in la banda mariachi. But what can I do?”

(1) The term, “mariachi,” is both singular and plural: A person who sings and plays mariachi music is called a “mariachi,” and the group is also called “mariachi.” (2) “Banda” refers to Mexican country dance music; it doesn’t mean “band,” as a synonym for a musical group. That word would be “grupo” or “conjunto,” followed by the name of the group. And finally: (3) Inserting Spanish words into an otherwise English text does not make a story bilingual. Mexican and other Spanish-speaking people do not talk this way. Mexican and other Spanish-speaking people do not even think this way.

Rather than reflecting Mexican children’s ways of speaking, ways of thinking, and ways of being in the world, the story is a deficit view of Mexican families, and the language is worse than stilted. Children who are hablantes or who are bilingual learn by working through meaning and concepts and nuance. But by using an English-dominant translation—using English as the literal point of transfer—the story obscures meaning, rather than bringing together two ways of meaning and two ways of seeing the world.

[2] Enjoy this wonderful community concert: https://www.youtube.com/watch?v=TavqBkUv-6M. The teacher is the guy in the back who’s playing the guitarrón and can’t stop smiling.

[3] In the book, the phrases in bold here are highlighted in red.