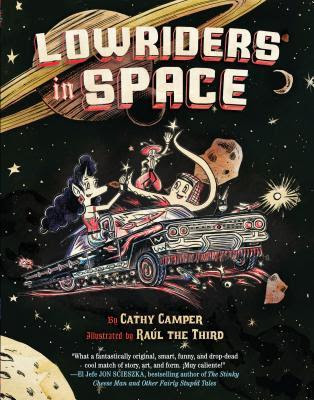 author: Cathy Camper
illustrator: Raúl the Third (González)
Chronicle Books (2014)
grades 4-up
Mexican American
In Camper’s and González’s hilarious graphic novel, three amigos—a mammal, an insect and a cephalopod—embark on a loopy, out-of-this-world adventure in an all-encompassing display of friendship and species diversity in which everyone speaks Caló.

The three, who live together and work at a car dealership six days a week, are the protagonists in the fastest, wildest hyperbole-driven story in the world. “Mechanic extraordinaire” Lupe Impala is “the finest mechanic south of Vacaville.” Ace car polisher El Chavo Flapjack Octopus wields “the wettest washcloth north of the Salton Sea.” And “the best detail artist around” is a mosquito named Elirio Malaría (“Don’t be scared, eses! Only lady mosquitos bite vatos for food!”).

They don’t have a cent, but they have big hearts, big ambitions and big dreams. They dream of having their own garage where they could build their own car: a lowrider that hips and hops, dips and drops. A lowrider that is low and slow—bajito y suavecito. One day, they see an announcement about a (literally) “universal car competition,” in which the “most mechanically inventive, exquisitely detailed cosmic car wins!” First prize is a solid gold steering wheel and a carload of cash—more than enough to fulfill all their dreams! But all they have is “the start of a car, the shell of a car. It was already low and slow, so slow it didn’t even go.”

After an uproarious, fast-paced intergalactic adventure involving at least one fart joke, the three have built a lowrider extraordinaire—bajito y suavecito—adorned with rockets and planets and stars and a tiny “burro-corn” on the front. They “cruised back to earth (with cinto de Orion on the roof), the milky way coated their car, stars stuck to the paint job like glittering dandelion fluff, (and) the Big Dipper gleamed from their license plate.” Their lowrider is, as one of the judges exclaims, “retro-nuevo cool.”

A note about the illustrations: After studying traditional Chicana/o art for many years, graphic artist Raúl the Third took the leap and returned to his cultural roots. For Lowriders in Space, his media became the time-honored red, blue and black Bic® pens, on what appears to be used brown paper grocery bags but is actually paper stained with Nescafé Suave. In this complementary partnership between author and artist, crosshatched, stamped and spiraled patterns mix with papel picado, the characters change size and form according to the needs of the story, asteroids become pom-poms for the windshield, and the planet Pluto is transformed into a gearshift knob.

Teasing the reader, González’s dizzying graphic references fly by. Here is Flapjack, wearing a Chavo hat (of course), sitting in his bucket, blowing bubbles (as octopi do), except he’s blowing soap bubbles. Here, leaning against a wall in his super-cool posture, is Elirio, a Zoot suit-wearing mosquito with a Cantínflas mustache. Here are dust bunnies that are literally bunnies. Here are the Cartínflas garage and Sapo Bell taquería. Here—if you look really carefully—you’ll see Cheech and Chong. And here are our homies in the background careening down a hill on a handmade, fire-spewing, big-tired bike; while an aged, sombrero-wearing, serape-clad Pluto makes a token appearance. We see him sitting next to a nopal cactus, rather than leaning against it—as if to say, “adiós, tired old comic book stereotypes, y ¿qué tal? cool new graphic novel vatos.”

For children, Camper’s uproarious story and González’s over-the-top artwork together encourage development of imagination and appropriate suspension of disbelief. Chicana/o children in particular will appreciate the cultural and linguistic references that have deeper meanings for them. As well, children who are not Chicana/o (and even those who do not speak or understand Spanish) will enjoy the story’s fast pacing and great good humor, and may learn new things as well. The story also works for teens and adults, who will “get” some of the smart and funny references and nuanced word play on just about every page that younger readers might miss. (Such as the great Mexican comedian, Cantínflas, morphing into “Cartínflas,” the name of the garage; and the Mexican sitcom, “El Chavo del Ocho,” into “El Chavo Flapjack Octopus.”)

Camper’s glossary, explaining Spanish, Spanglish, Aztec and Caló references, words and phrases, along with technical and scientific info, is a hoot as well. Take, for instance, “holy mole*,” where the asterisk leads to a lengthy explanation of a “thick Mexican sauce for meat made of many ingredients, including peppers and chocolate.”

No less important is that an aspect of “diversity” modeled here—one that often escapes authors and publishers—is group, rather than individual, problem solving. No fake “multiculturalism” here. No tokenism. No ethnic overlays. Lowriders in Space is the real thing, and it’s hilarious. And it’s highly recommended.