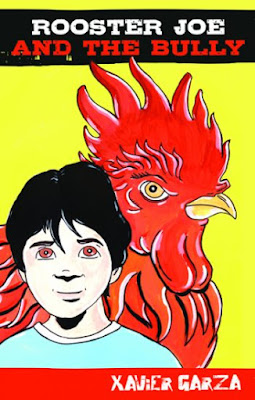 Seventh-grader Joe Lopez is a burgeoning young artist “who can draw anything,” but he has a special passion for roosters. He sketches “roosters, roosters and more roosters,” he tells his best buddy, Gary, because roosters are strong and brave and will always stand their ground, even when threatened by an animal bigger than they are.

When Joe intervenes to save a classmate from a lunch-money shakedown by the school bully and his friends because his “anger at the injustice being played out is more than (he) could stand,” they mark Joe as their next victim. Joe refuses to be a “snitch” and to let fear rule him, but after an encounter in which he accidently “depants” his nemesis under the bleachers in front of everyone, Joe is sure there will be a price to pay.

Joe’s mentor is his soft-spoken Grandpa Jessie, who is an accomplished artist. While instructing his grandson about new painting materials and techniques, Grandpa answers Joe’s questions about why his own paintings focus on struggle: for badly needed change, for human rights, for better wages, against unfair laws. “El pueblo unido jamás será vencido,” he tells Joe.

“Just one person can inspire,” Grandpa says, and can motivate and unite many to struggle for justice. History, he says, is full of lessons about people who were looked upon as being small and powerless, “but bravely stood up to those who were bigger than them. They not only stood up to them, but actually beat them.” People such as “César Chávez[1] and Emma Tenayuka[2] became inspirations that motivated countless people to stand up and say, ‘No More’ to the abuses they were facing.”

And standing up to bullies, Grandpa says, is the same thing. Together with his friends, including Kiki, a girl from his past, Joe does just that. And, with encouragement from his art teacher, Kiki, Gary, Grandpa, and others, Joe enters an art contest—after which he becomes known as Rooster Joe. There are several believable middle-grade issues here, but the main thing that preteens will remember is the necessity of uniting others in the struggle for justice.

Garza’s bold, black-and-white sketches of Joe and his friends—and, of course, the ever-present roosters—complement this short, fast-moving story. And Baeza Ventura’s colloquial Spanish translation in this bilingual flipbook is, as usual, extraordinary. Here, for instance, Grandpa tells his young grandson, in English:

“El pueblo unido jamás será vencido,” exclaims Grandpa Jessie. “That’s Spanish for ‘the people united will never be defeated.’ Even the tallest mountain will crumble when the people stand united against it.”

Rooster Joe and the Bully / El Gallo Joe y el abusón is a satisfying story about art and budding love interests and bravery and struggle and overcoming obstacles that will engage middle readers—and it’s highly recommended.