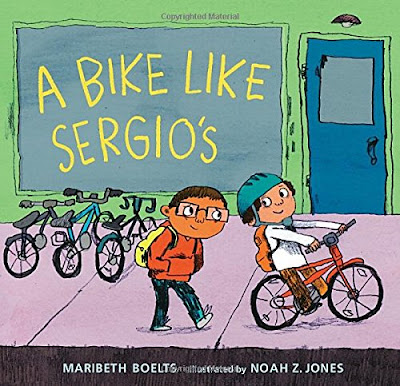 “Every kid has a bike but me,” says our sorrowful young narrator, who longingly watches his friends having the fun he is denied. Ruben especially dreams of having a bike just like that of his oblivious friend, Sergio, who rides his new one while Ruben breathlessly runs alongside. But since he’s poor, he says, “I know that wishes won’t make money appear.” At the grocery store, while Sergio purchases a pack of football cards, Ruben buys only the loaf of bread his mom wants.

When he sees that the woman in a blue coat ahead of him in line has dropped what he thinks is “just” a $1 bill, he pockets it, and when he gets home, Ruben discovers that it’s really a $100 bill. He dreams of finally being able to purchase a bike, but there’s a decision he must make. This moral and ethical dilemma takes up most of the story. When Ruben thinks that he may have lost the $100 bill, he retraces his steps “from school to bike shop to home.” It’s raining, and “rain and tears feel the same.” This defining moment before he recovers the money lends him a measure of empathy, and finally, young Ruben decides to return the money to the woman who had dropped it. But still, he doubts his choice: “I am happy and mixed up, full and empty, with what’s right and what’s gone.” Ruben is poor, then rich, then poor again.

This narrative, for all young readers to digest, implies that Ruben and other children in his low-income community are instinctively drawn to thievery in order to gain material objects.

What’s centered here, in text and illustration, is poverty. The “bike like Sergio’s” symbolizes all that Ruben doesn’t have. Rather, what he has is a scuffed-up apartment with lock and chain on the door, a sink full of unwashed dishes, items thrown around, drawers left open, and a mother who’s apparently too busy with four children to teach any of them how to put away their stuff. The neighborhood is scuffed-up as well, but Ruben’s beautiful (and ethnically mixed) classroom is well furnished and spotless. And the math class is working on—let’s hammer the point home in case nobody gets it—problems involving money. Even though Ruben’s dad has a job that requires him to wear a suit and tie, mom crosses items off her grocery list because this week, apparently, they can afford only a loaf of bread and a quart of orange juice until Saturday. And Ruben dreams of—having a bike just like those of his friends.

The story is a first-person narrative. So why does the title center the name of a material object (“a bike”) belonging to a minor character (“Sergio”), while disappearing the name of the narrator? Can this have something to do with the agency—or lack of it—of a child of color?

The major reviewers had only positive things to say about this story:

From Booklist: “…[A] friendly urban setting with just the right amount of detail to allow the important interpersonal dynamics to be front and center.”

From Bulletin of the Center for Children’s Books: “Sure to elicit discussion among kids, this is a morality play that strikes at the heart.”

From Horn Book:“[I]t leaves plenty of room for talking about what is most important in life from an authentically childlike perspective.”

From Kirkus: “Embedded in this heartwarming story of doing the right thing is a deft examination of the pressures of income inequality on children.”

From Publisher’s Weekly: “… Ruben’s ethical dilemma and emotional turmoil without preaching, and his struggle and journey toward the moral choice…(are) both dramatic and genuine.”

From School Library Journal: “This title hits on the issues of poverty, peer pressure, and self-control…. Parents of all economic backgrounds can use this selection to start a conversation about right and wrong.”

From Wall Street Journal: “…Boelts captures the agony of a moral dilemma…. In this rewarding tale, …Jones’s expressive, naïve illustrations reinforce the sincerity of a boy’s valiant struggle with temptation.”

Here are two alternate scenarios. Rather than poverty, what’s centered here are Ruben, his family and his community. (Since Ruben and Sergio could be Latino names, I’ll insert a few appropriate Raza cultural markers.)


Rubén and Mamá and younger sibs go to the bodega to buy some masa and a bag of oranges. While Mamá’s back is turned, Rubén sees some bills fall out of Sra. Rodríguez’s purse. He picks up the bills and runs over to return them to her. Sra. Rodríguez gives Rubén una sonrisa y un abrazo and says, “¡Ay, Diós te bendiga, mijito!” Rubén, excited and happy, runs over to Mamá and tells her what has occurred. She gives him una sonrisa y un abrazo and says, “Estoy orgulloso de ti.” They all go home and, when Papá returns from work, Rubén tells him the story and receives una sonrisa y un abrazo. When Rubén goes to bed, he counts all the sonrisas y abrazos he has received this day.


When Rubén comes home from school, Mamá asks him to go to the bodega and buy some masa and a bag of oranges. Outside the bodega, Rubén sees that a woman in a blue coat has dropped her purse. She picks it up, but she doesn’t notice that some money has fallen out. Rubén picks up five $20 bills and turns around to give them back to the woman, but she has gone! Rubén goes home with the money and tells Mamá what happened. Rubén and Mamá, with baby Elena in tow, return to the bodega and ask Sr. Martínez if he had seen a woman in a blue coat a little while ago. Sr. Martínez says that, yes, Sra. Rodríguez was just here and she lives somewhere on the next block. Mamá and Rubén (and baby Elena) start knocking on doors. Finally they find Sra. Rodriguez, and Rubén returns her money. Sra. Rodriguez is surprised and happy. She gives Rubén un gran abrazo and says, “¡Ay, Diós te bendiga, mijito!” And Rubén and Mamá and Elena soon find out that Sra. Rodriguez is about to take some fresh-baked cookies out of the oven….


No grinding poverty and no pining for something that’s unobtainable. No pretending that stolen money is found money. No contrived moral and ethical dilemmas and no sociopolitical metaphors about being poor and then rich and then poor again.