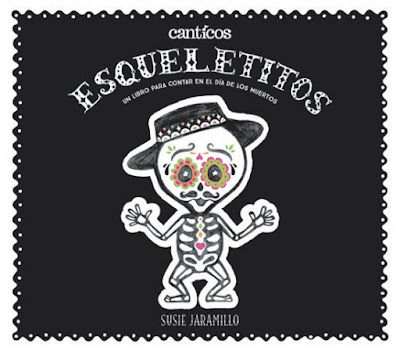 El Día de los Muertos (Day of the Dead), on November 1 and 2, is celebrated in central and southern Mexico and, in recent years, has moved north as well. Originally based on Aztec tradition, it’s a time when the spirits of the people’s beloved (and sometimes not-so-beloved) relatives walk among the living and are welcomed and celebrated by festive parades and raucous partying, visiting and decorating graves with marigolds, candles and other colorful and fragrant mementos, and setting out family altars with photos and ofrendas of flowers, beer, and foods that were favored by those relatives. It’s at this time when the spirits of the dead often appear as the scent of marigolds, the sight of flittering hummingbirds, or other things of beauty. After the spirits have left and returned to their graves, their friends and relatives gather together to eat the food and take down and store the altars for the following year.

Based on the popular Latin American children’s song, “Los Esqueletos Salen de la Tumba” (“The Skeletons Come Out of the Tomb”), in which activities change from hour to hour, Esqueletitos is an interactive how-to-tell-time counting rhyme that features a clock with moveable hands on the inside front cover. Modeled in part after Mexican artist José Guadalupe Posada’s prints and engravings but minus his biting satire and political critiques, Jaramillo’s adorable cacophony of mostly gussied-up esqueletitos rise from their tombs and decorated graves at 1 a.m. and party all day and night.

Accompanied by a skeleton pollito, elefantito, and ratoncito from Jaramillo’s previous board books—and with a skeleton kitty, puppy, monkey and bat joining them as well—the esqueletitos dance into the town square that’s been decorated to welcome them with an enormous wreath, festive flowers and papel picado. On the way, they all eat, jump and jive, play chess, take a rocket ride, dance some more, eat some more and finally, as the clock strikes midnight, return home to their eternal resting places—until the following year (or whenever youngsters open the book and begin again)!

With Esqueletitos, Jaramillo took a break from her usual bright acrylics overlaid with black ink and used pencil only. Her purpose, she told me, was to maintain the rustic black-and-white look of the Posada prints. While one might think that this technique would transform something meant for little kids into a somber grey and black board book they wouldn’t want to pick up, the joyous, laughing skeleton expressions and continuous action maintain at least the same effect as would full color. And, as a plus—the cover appears to glow in the dark!

Unlike other bilingual books in which the English text is almost always dominant, this practically indestructible accordion, fold-out reversible design features the Spanish text on one side and its English adaptation on the other, so that the youngest hablantes, bilingual, and non-Spanish speakers can flip the book over to switch languages whenever they want to.

Although the images are the same in both the Spanish text and English adaptation, each maintains its own rhythm and rhyme, capturing the melody, spirit and sense of humor without being forced to conform to the other. And the refrain in both Spanish—“Tumba-laca tumba-laca tumba tumba”—and English—“Tomb-a-laca tomb-a-laca tomb-a tomb-a”—join together, playing on the terms, “tomb” and “calacas.”

As a plus for hablantes who are learning English (as well as to maintain the meter), Jaramillo effortlessly inserts the Spanglish term, “skeletitos,” into the English adaptation. I look forward to seeing entire picture books written so that hablantes can relate to them in this positive, “homey” way.