Uninterrupted View of the Sky 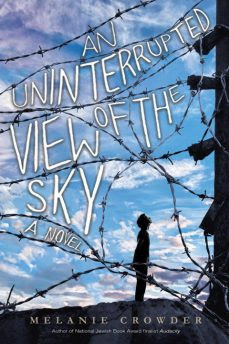 Seventeen-year-old Francisco Quispe loves soccer, but even though he’s smart, he doesn’t expect much of a future in school because of discrimination related to his Aymara heritage and appearance. Along with his friend Reynaldo, he dreams of selling knockoff soccer shirts and equipment in the market in Cochabamba, Bolivia, where he has lived his entire life.
In an instant, his life changes when his mother tells him and his eight-year-old sister, Pilar, “Papá ran out of gas on the highway” and has been arrested. The reader is as confused as Francisco is. Why would a taxi driver walking to the gas station be in trouble with the police?
“The police…said that he was going to make cocaine with that gasoline.” Mamá leans over the sink. Her head hangs below her shoulders, and her fingers grip the chipped porcelain. “It’s a lie and they know it.”
Because Francisco’s father is Indigenous, the police consider him guilty of Bolivia’s infamous Ley 1008, with no way of proving himself innocent. Unable to cope as a single mother with the stigma of a husband in prison, Francisco’s Mestiza mother abandons the family, so Francisco and his eight-year-old sister, Pilar, must live in the men’s prison with their father where the bathrooms are fouled with sewage and prisoners must pay for their own cells. Before they can afford a cell with Mamá’s final paycheck, Pilar is sexually assaulted, and both Francisco and his father are beaten by other inmates. Yet Francisco and Pilar are allowed to leave the prison in the daytime to attend school, and in those hours of freedom, he embarks on a quest to save his family—and himself.
Francisco decides that he wants to become a lawyer to help his father and others in prison as a result of Ley 1008, which gives police unlimited powers to detain persons suspected of manufacturing cocaine and other controlled substances. The law was passed in 1988 in response to pressure from the United States, which faced a drug crisis and scapegoated Indigenous Bolivians who for centuries have used the coca leaf in sacred rituals. Never a strong student—because he believed university to be an impossible dream—Francisco faces even greater odds in the form of application fees he has no way of paying. He makes a Faustian bargain with his old friend Reynaldo, who has run away from home and become a drug dealer due to family problems and despair for a better life through any other means now that Francisco can no longer go into business with him.
Crowder portrays the economic and racial divides in Bolivia without preaching. The book uses very little Spanish or Aymara—basically just enough to communicate that this is a different place and culture—which helps to avoid the awkwardness that comes from writers trying too hard to prove their knowledge of the language. Francisco is a complex and compelling character, loyal to his sister, his father, and his friends (which makes it all the more painful when they appear not to return his loyalty). When given the choice between taking Pilar to their grandparents in the Altiplano, he is torn between her safety and her opportunities in life—for the school there ends after a few grades—and he is worried that leaving his father alone in prison will break him. Complicating his decision is Soledad, an Indigenous classmate whose drug-addicted father is also in prison and who grew up fighting sexual harassment on a daily basis. Soledad teaches these survival skills to Francisco and Pilar, but as he becomes attached to her he also learns how to approach someone who has been abused. Also complex and fascinating is Francisco’s relationship with best friend Reynaldo and the other students in his class, who avoid him because he lives in prison but come to be tempted by the easy riches of the drug trade that contributed to the passage of the draconian law.
An Uninterrupted View of the Sky takes place around 2000. Opposition to Ley 1008 contributed greatly to the election of Bolivia’s first Indigenous president, Evo Morales, in 2006. While the law is still on the books, Morales has sought to strengthen legal protections for people, particularly Indigenous people, accused of drug crimes, and to improve prison conditions. An Uninterrupted View of the Sky is highly recommended.
—Lyn Miller-Lachmann
(published 8/15/17)

A shorter version of this review first appeared in The Pirate Tree (thepiratetree.com).