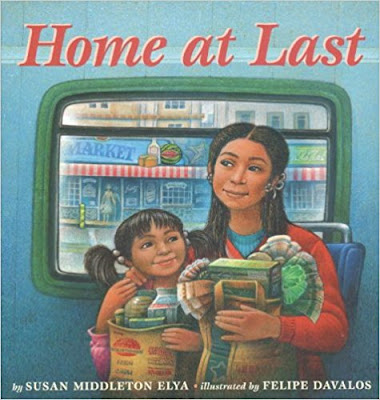 Eight-year-old Ana Patiño and her family—Mamá, Papá, and baby twins, Jesús and Julio—come from a village somewhere in Mexico and move to “a town surrounded by corn” somewhere in the US. We don’t know what circumstances brought them here; all we know is that, from the first page, Mamá is “already missing home.” (Apparently, this “town surrounded by corn” does not contain Spanish-speaking agricultural workers—actually, it doesn’t contain any agricultural workers at all. Maybe it’s the off season, even though the illustrations show a field full of corn that’s ready to be harvested.) The first spread shows Ana, curiously looking out the window at the field full of corn. Maybe she’s wondering about the absence of farm workers, too.

“After the family settles in,” the story continues, Ana is in school, in what appears to be a friendly, multiethnic third-grade classroom with a supportive teacher who encourages her to say “hello.” At first, Ana is too shy, but by afternoon, she’s saying “hello.” By the next spread, we are told that Papá has gotten a job at the factory where Uncle Luis works, and Ana likes school. Mamá is in the kitchen, and the babies are probably taking a nap. On the next spread, Ana is back in school. There are a calculator and lots of art supplies, all the students are smiling and the teacher is looking on as the students share their artwork.

The next day Ana learned to say her name in English. Everyone in the class practiced with her. By the end of the day she had said “My name is Ana Patiño” a dozen times.

Let’s stop here for a moment. The child’s name is Ana Patiño. It’s the same name in English as it is in Spanish. A name is a name. Exactly what is it that she’s practicing? And why is everyone else practicing? And why is it taking all day? Everyone is sure devoting a lot of time to saying Ana’s name. If this is a third-grade classroom as it appears to be, don’t the students and their teacher have anything else to do? Like study for standardized tests?

On the next spread, Ana and Papá are practicing English together and keeping the babies entertained while Mamá is boiling rice and beans (because that seems to be all that Mexicans eat). Mamá wants to understand English, but when Ana suggests that she could learn, she responds with “¡Imposible!” (Except for “¡Imposible!” just about every Spanish question or phrase in the dialogue is repeated in English. This is annoying.)

The next pages depict Mamá’s problems because she doesn’t speak English: a rude grocery clerk who overcharges her, an inability to read Ana’s teacher’s note, and finally—The Crisis That Changes Everything. Mamá panics because baby Jesús is running a fever, Papá’s not home from work yet, and their neighbors “didn’t understand her frantic Spanish.” Or gestures. Or the fact that she’s holding a sick baby and apparently doesn’t know what to do because she doesn’t speak English.

Let’s stop here for a moment. Why, with two babies and an eight-year-old, is Mamá so helpless that she can’t treat a baby with a fever? Why isn’t she resourceful, as Mexican parents are? Why doesn’t the family have remedies in the apartment? Such as baby aspirin or Tylenol? Or apple cider vinegar to mix with water? Or alcohol to rub on the legs? Or chicken broth? Or any of a number of Mexican herbs? Why can’t the English-speaking neighbors understand the gestures of a panicky mother with a sick baby? Why can’t Ana, who speaks English, find a neighbor who can help or go to the store and get something?

Finally, Mamá agrees to learn English. So she goes to evening school while Ana and Papá prepare “overcooked pork wrapped in a tortilla” for her (because only Mexican mothers know how to cook), she learns “how to count, how to answer the phone, and how to shop at the store,” and—aces her test! With Ana watching proudly, Mamá corrects the grocery store clerk who had cheated her the first time (after which “she dances around on the sidewalk”). And one might surmise that she now knows what to do when one of her babies gets sick.

After hurrying back to the apartment where Papá, Uncle Luis, and the twins are waiting, she declares (in English), “We’re home!” Meaning the US, not Mexico, is now their home. The End.

Home at Last was probably written to help English-speaking children understand the struggles of new immigrants. But this unrealistic and didactic story serves only to reinforce the stereotype of Mexican women as helpless and dependent; and to infantilize a Mexican mother with several children, who needs the pressure of her husband and daughter to learn to speak English, which will be interpreted as the only road to empowerment, not to mention survival.

Davalos’s vivid oil paintings, on a bright and varied palette that beautifully depicts facial expressions as well as a multiethnic neighborhood and classroom, are not enough to save this poorly conceived and poorly written story. Home at Last is not recommended.