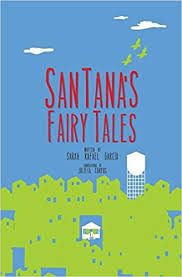 Storyteller and visual artist Sarah Rafael García offers six “Fairy Tales for Trust and Justice,” all of them set in Santa Ana, a city in southern California that borders “the happiest place on Earth.” But that place is “never happy” for the brown people who live and work there, who live in fear of the landlords, the police, and ICE. In the first story, “The Carousel’s Lullaby,” we see the stakes, as teenager Saul remembers the carousel where he reunited with his parents after their separate migrations across the border, where he and his younger brother spent so many joyful weekends until Señor Billy Spurgeon, the real estate developer, tore it down to make way for shops and restaurants for rich Anglos. One night, Saul sneaks out to hear the ghost of the carousel, and never comes home—one more unarmed person of color killed by police.
In “Zoraida and Marisol,” perhaps the most heart-wrenching of an emotionally powerful collection, transwoman Zoraida remembers her struggle for survival and to be herself while trying from the next world to save her younger friend Marisol:

I am an enchanted woman named Zoraida.
But of course you already know my name. You knew me when I was alive.
In this life, I reign from far, far above the castles and queens. I travel by whispers, wished upon the North Star and hushed weeps. Just like you called upon me in midst of bloody murmurs, wishing for death to ease the pain. Some call me death, others the Godmother of life.
In my last life I too thought it was my fate to die as a woman on a night like tonight. But death came just too soon, leaving me trapped between others’ lives and my own.

While Saul and Zoraida lose their lives to the supernatural ogres and beasts that represent forces of repression, the resourceful and resilient children of the next two stories, “Just a House” and “Hector and Graciela,” manage to outwit those who would steal their happiness and their lives—though not without great loss. Josefina’s nemesis in “Just a House” are Anglo gentrifiers turning their close-knit community into a playground for the wealthy (hers is the unhappy mother toiling in that artificially happy place). Graciela and Hector’s parents debate how to tell them that ICE threatens to destroy their family. Graciela, the older one, tries to protect her younger brother, but he is far more aware and clever than she gives him credit for. Readers will note the parallels between this story and the Grimm fairy tale “Hansel and Gretel,” including the ogre that lures the children with food.
For the last two stories, García narrates from the point of view of adult characters. The Anglo prosecutor in “When the Mural Speaks” hears the voices of Chicana/o veterans painted on a mural, and the Chicana writer of “The Wishing Well” hears the voices of her characters, most of them whose lives were cut short by the “snouted beasts.”
García’s poetic language employs code-switching and incorporates individual words, dialogue, and songs in Spanish in an organic and believable way. For instance, in the first story, she code switches in dialogue:

“Saul! Where are you going? Don’t leave, you know what Apá says about being out after sunset.”

“Daniel don’t you want to know what happened to the carousel? Vas a ver, first the carousel and quinceañera shops, soon los fruteros, and one day it might be us!”


Rather than a word-for-word translation, Corpus’s Spanish version captures the rhythm and voice of the original, as shown by the Spanish beginning of “Zoraida y Marisol,” the English version quoted above:

While SanTana’s Fairy Tales was created for general adult readers, its focus on young people resisting oppression, coming of age, and coming into who they are makes this a compelling choice for teens. It’s highly recommended.