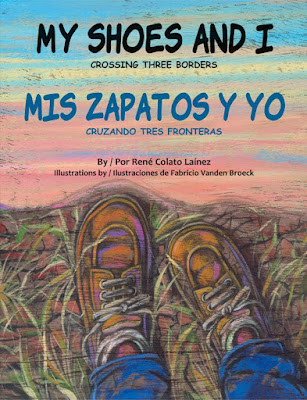 My Shoes and I: Crossing Three Frontiers / Mis Zapatos y Yo: Cruzando Tres Fronteras was originally published in English by Boyds Mills Press in 2010. With English text modified and simplified, and Spanish added for this edition, the story is based on Colato Laínez’ own arduous 1,000-mile journey, traveling with his father from El Salvador through Guatemala and Mexico to the US. Together, the boy and his father walk across valleys, climb up mountains, take a two-day bus ride to Mexico City; sleep in an old, dark trailer for a few days—and, finally, swim across the Rio Grande and walk to the border—to reunite with Mamá, who is waiting for them on the other side.

In Colato Laínez’s gentle, reassuring story for the youngest readers, a pair of new shoes that Mamá had sent young René remains the literal and visual focus of the journey. The shoes are symbolic of the long, dangerous struggles without actually telling or showing any real danger. As René’s shoes, depicted on just about every page, travel with child and father, they deteriorate: they become scuffed and dirty, they develop holes, they overflow with mud, they fill with pebbles, they get soaked in the river. But throughout, the shoes are with him: “Uno, dos, tres…” they still walk everywhere he walks. And finally, father and son “cross the finish line, together.”

In contrast to the author’s actual situation, the family here are immigrants rather than refugees. This is an important distinction. In the 1980s, thousands of Salvadorans fled here to escape the 12 years of violence in which right-wing government forces, supported by the US, murdered more than 75,000 civilians.

Although times were dangerous then and they remain so today, both story and illustrations erase the horrors and the historical differences between the author’s experiences in the 1980s and those of Central American refugees today. For instance, refugees from Central America are desperately fleeing organized gang violence; whole families often travel in caravans for safety. And, of course, the political climate on the US side is terrifying as well.

But in father and son’s travel from El Salvador all the way to the US, there’s no political content then or now; neither running from war nor running from gangs. Except for some difficulty—inclement weather, dogs’ stealing their lunch, Papá losing his wallet and the two having to stay in an old dark trailer for several days —there’s just “uno, dos, tres,” counting the steps and finally “crossing the finish line.”

(In his author’s note, Colato Laínez writes that, after his father lost his wallet, an old trailer in Mexico City became their home for two months, while his father had to find work to “get money for us to eat” and his mother saved more money for their trip. This is a common situation among people who are crossing, and would have been an important part of the story.)

Vanden Broeck’s bright, heavily saturated paintings on weathered wood-grain backgrounds center the shoes from varying angles. In some scenes, the illustrations belie the text. In the next-to-last spread, for example, René’s shoes are in the water, and he is looking directly at both of them. But the text reads, “I see a shoelace. I grab it. A shoe comes out of the water. I don’t see the other one. I come out of the water. Papá and I look around. Trapped in some branches is my other shoe.” And in the last spread, René and Papá reunite with Mamá at the shore—and they appear completely clean and dry.

It’s possible that whatever text was revised in this newer version of the story did not follow the art, or vice versa.

As a story of an immigrant or refugee family reuniting in the US, the story leaves a lot of questions: If Papá and young René are undocumented (as he writes in his author’s note), how is it they are traveling alone? If they are documented, why are they mostly on foot rather than taking available transportation? What’s the status of Mamá, who is already on the other side?