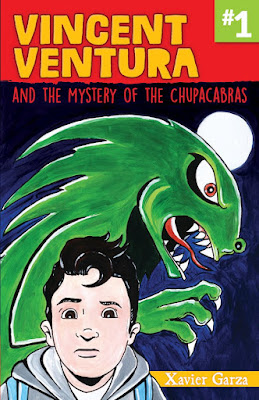 Lots of kids like scary stories, and the first volume in Xavier Garza’s bilingual series published by Texas-based Arte Público/Piñata Books, Vincent Ventura and the Mystery of the Chupacabras / Vincent Ventura y el misterio del chupacabras is sure to delight and satisfy middle grade fans of the horror genre. Vincent and his two best friends, Michelle and Bobby, notice strange things happening next door at 666 Duende Street after Mr. Calaveras moves in. For one thing, dogs are disappearing. Inside a foul-smelling drainage tunnel, Vincent finds Chato, a neighbor’s celebrity chihuahua, dead and its blood drained. This is not the work of a vampire but a chupacabras, a beast that sucks blood, known to inhabit both Mexico and Puerto Rico. Could Mr. Calaveras be transforming into the notorious chupacabras?

Against the advice of his friends, Vincent disguises himself and goes to Mr. Calaveras’s house to spy on him. The gruff neighbor sniffs out the ruse, and now Vincent is in danger. And so is his adorable beagle Kenny, who disappears soon after. Although the chupacabras is only supposed to kill non-human animals, there’s evidence that Mr. Calaveras, who was himself bitten on a university research trip to Puerto Rico, has killed humans in the past and will do it again.

Garza, who has authored middle grade tales of contemporary humor and horror, strikes a good balance of safe and scary for readers ages eight to 12. Yes, a dog dies, but not one to which the readers are attached. In fact, Chato the chihuahua’s celebrity status makes it a source of humor as much as horror. Garza’s vivid descriptions capture the sensory experience of entering the chupacabras’s lair. The author’s cartoon-like illustrations, one per chapter, juxtapose the ordinary-looking protagonist and his friends with the exaggeratedly fearsome beast of lore. Readers will learn basic facts about chupacabras without those facts slowing down a well-paced story. And all’s well that ends well, except that Mr. Calaveras has disappeared without a trace and 666 Duende Street has been fixed up to await its new tenant. Who will bring the next disaster to the neighborhood?

This bilingual flip book contains a smooth Spanish translation by Gabriela Baeza Ventura that hews closely to the English original. Along with the short chapters and illustrations, the English and Spanish versions in the same book make this an especially good choice for young readers who are learning the other language.

An interesting bit of trivia is that Garza’s own son is named Vincent, and he wrote the series as a gift to his son. And now to all of us. Highly recommended to fans of light horror and those dipping into the genre for the first time.