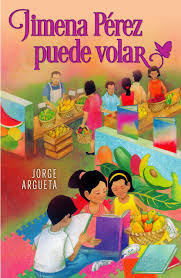 When they reach the border, the US government breaks up family groups and often imprisons the terrified children in overcrowded detention cells, with no physical or emotional warmth, for long periods of time.

Argueta presents Jimena Pérez puede solar / Jimena Pérez Can Fly from the perspective of one of these children. In his beautiful, empathetic story-poem, the narrator is ten-year-old Jimena Pérez, a happy child who lives with her parents in the barrio San Jacinto, in El Salvador. She and her mom sell produce in San Jacinto Market, and her mom tells her it’s their home:

“The market / has fed us
our whole lives.
Your grandmother and great-grandmother
worked here too.
Fruits are a blessing
like you, Jimena.”

After being threatened by the gangs, Jimena’s family makes the painful decision for her and her mom to travel all the way to Texas to live with relatives. They board the dangerous train, known as “La Bestia,” And after their long journey, they’re grabbed by La Migra:

Far away I hear
my mama’s voice.
I feel alone.
Other kids are crying.
We’re little birds
alone and sad
in a metal cage.

In the detention cell, she finds a cardboard box filled with books that someone has donated. They remind her of San Jacinto Market and her friends, and give her a measure of comfort. And for a little while, the terrified Jimena is at peace:

I like seeing the colors
and pictures in the books.
I take one into a corner
and when I open it,
the letters kiss me
like my mamá’s words,
like my papá’s words.
I am a little bird.
No one can stop me.
I am Jimena Pérez.
I can fly.

Of course, this is not the whole story. We don’t know how this story ends for Jimena and for the other terrified, incarcerated children. We know that, for this moment, with these beautiful books, Jimena Pérez puede volar.

Argueta wrote this short, evocative and empathetic story-poem in Spanish, which Elizabeth Bell beautifully translated into English. Mexican artist Fabricio Vanden Broeck’s mostly somber illustrations, rendered in India ink on scratchboard, effectively portray the initial joys and later the terrors of a young Salvadoran child, abruptly separated from her family and imprisoned in a detention center along with other frightened children.

Through Jimena’s story, Argueta gently supports our young protagonist with some measure of comfort as she begins to feel less alone. At the same time, he presents middle-grade readers with a glimpse into the nightmares that child refugees endure in dealing with their terrors and their unknown fates. Jimena Pérez puede volar / Jimena Pérez Can Fly is highly recommended.

Note: It’s a box of donated books that allows Jimena’s dreams of home and family to embrace her one more time. One of Argueta’s passions is to provide beautiful picture books in Spanish to children in El Salvador and to those incarcerated in US detention centers. Although Jimena Pérez puede volar / Jimena Pérez Can Fly does not mention his project, it’s worth noting and appreciating. (See also Oralia Garza de Cortéz’s lovely poem, “Nueva Generación.” (https://decoloresreviews.blogspot.com/search?q=Oralia)