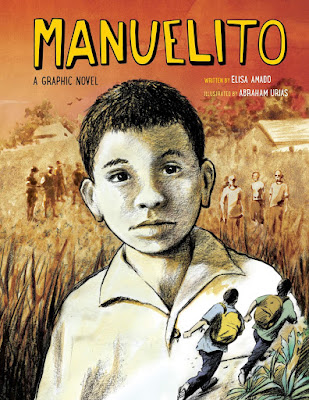 Amado dedicates Manuelito to “the real Domingo, who was disappeared by the Guatemalan army, and to his family and all other Maya who have experienced—and who continue to experience—so much social injustice and violence.”

In Spanish, as in English, “to disappear” (desaparecer) is a verb. When the word, “desaparecido” is used as a noun (“disappeared”) it means that the person was a victim of murder, usually by right-wing government forces. In Latin America, “disappearance” is a tactic to get rid of people who might cause “problems”—a political concept and political reality that’s been used for generations.

Sometimes, families don’t find out about these “disappearances”—numbering hundreds of thousands—until decades later. Beginning in the 1970s and ‘80s, grassroots organizations called Madres de los Desaparecidos (Mothers of the Disappeared) formed all over Latin America; and currently, August 30 marks International Day of the Disappeared.

Amado and Urias present Manuelito as a graphic novel, narrated by a 13-year-old Maya boy whose family sends him to the United States in order to find safety and refuge from the rampant government and gang violence in Guatemala. Manuelito knows that several of his friends and relatives have been disappeared, including his tío, Domingo.

The story begins in the present and flashes back to Manuelito’s journey.

The first two fully illustrated pages are set in the form of a photo album and Manuelito’s brief, matter-of-fact description of almost all family and friends (except for the coyote—“a very bad man who gets paid to take people like me to the USA.”) Just about everyone is smiling and looking directly at the camera. Readers will notice from the text that Manuel presents some of them in the past tense, a signal that these people are no longer alive.

In the lower left-hand corner of the second page is the gut punch: “My mother’s brother Tío Domingo. He was disappeared when he was 12, almost 35 years ago.” It’s apparent that family members had kept his last photo—of a boy smiling at the camera—and bestowed his relationship-name, tío, long after he had been disappeared, and long before his nephew, Manuelito, was born.

On the next page, Manuelito shows a photo of himself with his friend: “My friend Coco Loco. He was older than me. His father owned the village store.” Again, Manuelito describes his older friend and Coco Loco’s father in the past tense. Manuelito doesn’t say that they were disappeared as well, but it’s implied.

The villagers are under armed siege from every angle—harassed by the government soldiers (soldados), the civil patrol (PAC), and the gangsters, the narcotraficantes and “maras,” and the reign of terror is palpable. Villagers frantically phone their relatives in the US, begging them to take in the boys before they’re killed or forced to join a gang. Manuelito’s parents find a coyote and, together with Coco Loco’s parents, raise some money to pay him and to purchase a cell phone for the boys. Manuelito pretends to be brave, and Coco Loco, who is a little older and whose father owns a small store, shores up his confidence a bit. 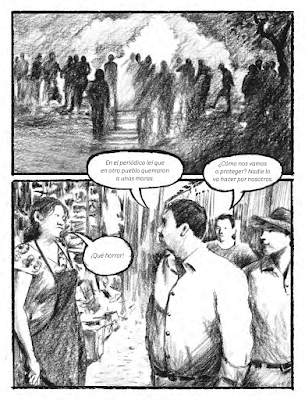 The coyote often doesn’t show up as promised, and one of the boys at a temporary shelter warns the two that they had gotten a bad coyote, a dangerous guy: “Les tocó un coyote de los malos, un tipo bien peligroso.” He’s right.

Manuelito, who is on the road with a family he has met, phones his father and tells him that the coyote they hired to see them across has threatened to kill Coco Loco, which is apparently what had happened. Still, Manuelito continues to hope that his dear friend is alive somewhere. In his imagination, Manuelito looks out the window of his home and sees the maras, the soldiers—and Domingo and Coco Loco. By now the reader suspects that Coco Loco has been murdered and learns that this—or joining the maras or the soldados—“entonces pensé en las maras, en los soldados y en mi tío Domingo”—might be the reality of the socio-political terrorist act known as “disappearance.”

After a two-day bus ride, the family escorts Manuelito and some new friends to the Río Bravo and tells them exactly what to say to the US Border Patrol on the other side. After crossing the river, Manuel recites the exact words he’s memorized:

After a day at a crowded detention facility, the children are escorted to another center—with books and computers, and a TV, and a caring director. He feels safe. But when the heartbroken director tells the children that there is suddenly “no more money from the new government” (read Trump) and the center is closing, Manuelito finds himself on a bus again. He wants to go home. He imagines his family, waiting for him. And he also imagines the mara, and the soldados—and Coco Loco and Domingo.

Arriving in Long Island, Manuelito meets his aunt and begins to settle in. His aunt cautions him not to open the door for any reason but, when he hears the pounding and shouting, he’s afraid not to. It’s an ICE raid, and he’s quickly nabbed and put on an airplane headed for home.

In an afterword, Patricia Aldana presents a short, accurate historical and sociopolitical history of the Northern Triangle (El Salvador, Guatemala, and Honduras), which she describes as “three of the most dangerous peacetime countries in the world.” Unfortunately, the US policy of “regime change” that has and continues to foment terror in this and in other areas of the world, is not discussed.

Urias’ dark and sometimes smudged charcoal illustrations appear rushed and, as so, complement the action and reflect the dread and horror in the story. As well, he portrays most of the faces of the gangsters, soldiers, border patrol, ICE agents and shelter staff, along with the hordes of other child prisoners, as anonymous blurs—the way that newly arrived and terrified young refugees would see them. But it’s the almost photo-realistic portraits of Manuelito and his friends and relatives—and also, his caring teacher and the sneering, menacing coyote—that readers will not soon forget.

Neither the Spanish nor the English version is a direct translation of the other. Rather, each reflects, not only the natural flow of the language, but how specific characters might actually speak. However, while the coyote’s “street language” is totally realistic and threatening in the Spanish version—he’s a mean, sadistic dude—it appears to have been toned down in the English version. The Spanish appears to have been similarly toned down in other sections as well.

This is a story without a happy ending and is age-appropriate for middle- and high school students who are coming to see that things don’t always work out for the best. Set in the Northern Triangle, this book is a contemporary, realistic complement to Phillipe Diederich’s Playing for the Devil’s Fire (Cinco Puntos Press), which takes place in Mexico.

Elisa Amado, a Guatemalteca who currently lives in Canada, is a brilliant writer and an excellent translator. And graphic artist Abraham Urias, a Salvadoreño who currently lives in the US, is a remarkable talent as well. For Manuelito: A Graphic Novel, and Manuelito: una novela gráfica, (the creation of which could not have been easy for either author or illustrator), they deserve every award there is. In these difficult and dangerous political times for immigrants, refugees and asylum seekers, both Spanish and English versions are highly, highly recommended.

Gracias to my friends and colleagues, Judy Zalazar Drummond, Lyn Miller-Lachmann and Noam Szoke. And thanks to Annick Press for the interior image.

After communicating with Annick Press, I learned that (1) Elena Iribarren was the Spanish translator here, and that the order of operations was actually to finalize the English edition first (both text and images) and then to create the Spanish translation, in order to preserve the integrity of the image-to-text relationship.

Kaela Cadieux, Annick’s managing editor, told me that the author, Elisa Amado, and the translator, Elena Iribarren, have a longstanding working relationship, and that Elisa closely and precisely guided the project, including the translation. Any discrepancies between the English and Spanish versions were the product of careful consideration. Elisa has extensive experience as a writer in both English and Spanish, in addition to her familiarity with the real-life situation that forms the foundation of the story. Working together with the publisher and translator,  the shared intention was to reflect the inherent differences between the two languages and to preserve the truth of each character’s voice. For example, in the Spanish version, the coyote calls Manuel and Coco Loco “cobardes” (cowards), while, in the the English version, he calls them “sissies.” These particular colloquialisms were meant to be accurate, both to the story and to the reading audience in each language.