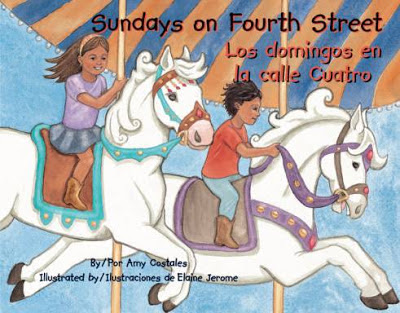 Set in a Mexican barrio of Santa Ana, California, Sundays on Fourth Street / Los domingos en la calle Cuatro is a warm, loving story of the author’s memories of her daughter and two nephews on their Sunday excursions along la calle Cuatro. Young readers and listeners accompany Kelsey (the narrator), Mamá, Tía Pilar, Tío Armando, and primos Pepe and young Edgar, as they get haircuts (and tamarind lollipops for being patient), shop for groceries, try on beautiful (and way too expensive) boots, attend una feria in the church parking lot, have lunch at the taquería, watch un grupo folklórico perform in the plaza, and, that night, dream of all the things kids dream of. 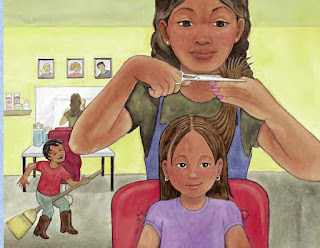 The book design is inviting. On each left page, a textured, light-blue background holds a text block in English and Spanish, separated by a small, framed picture that touches on the theme. The facing, full-page illustration on each right page moves the theme into the story. For instance, the image of a salt shaker, a slice of lime and a jar of chile con limón on an “explosive” background hints at the scene of young Kelsey enjoying a delicious mango-on-a-stick, “bailando en la lengua.” 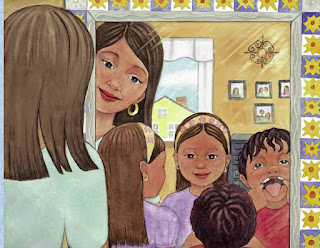 Some of Jerome’s ink and watercolor illustrations beautifully convey the story: Skin tones are varied, as they might be in a Mexican family; and several of the scenes are playful and gorgeous. The closeups especially—such as the scene where Kelsey is having her hair cut, another in which she is savoring her mango-on-a-stick, and the one in which the children and Tía Pilar are looking in the mirror at Kelsey’s (temporarily) painted lips—have a Diego Rivera-like quality that vividly portrays the Indigenidad of the family.

However, some of her illustrations appear flat and literal, and some unfinished. The scene of the danzantes folklóricos, for instance, lacks the energy described in the story. At a taquería, family members sit rigidly around the table, on which plates of food are arranged in a geometric patten. And the image of everyone walking home in the evening seems to have been hurriedly sketched.

Perhaps most important, details were left out that would have accurately depicted a Mexican family and culture. While the story implies that the family is economically strapped, the images hint that the family is culturally poor: there’s no Mexican art on the walls, no crucifix or figure of La Virgen de Guadalupe inside or hanging over the car’s dashboard, no colorful, planted flower pot outside.

Costales first wrote the story in her “storytelling” language and rhythm—a vibrant, playful Mexican Spanish—that rolls off the tongue. The English version (which she wrote afterwards) reads well and moves the story forward (There are folk dancers in the plaza… The dancers stomp their feet and the rhythm vibrates in my chest). And young hablantes and English-speakers learning Spanish will feel the pulse and energy of the Spanish (Hay un grupo folklórico en la plaza… Los danzantes zapatean, y el ritmo vibra en mi pecho).

Since Los domingos en la calle Cuatro is a story about an extended Mexican immigrant family in a Mexican barrio, celebrating each other and their shared culture—and the story was primarily envisioned to be told or read in Spanish—it would have been appropriate to lead with the Spanish (title and text) and follow with the English.

Kelsey knows that, once she outgrows her boots, she may not get the gorgeous new boots she admired. She knows that she may not get a new bike. But what she gets—no, what her family already has—is more important.

Here is a loving story about a close Mexican family enjoying each other, being together in a community where everyone knows each other—where a haircutter washes Kelsey’s lollipop-sticky hands and a cashier quickly replaces Edgar’s’s balloon that’s floated all the way to the ceiling before he starts crying. Sundays on Fourth Street / Los domingos en la calle Cuatro is highly recommended.