The Unicorn Rescue Society: The Chupacabras of the Río Grande 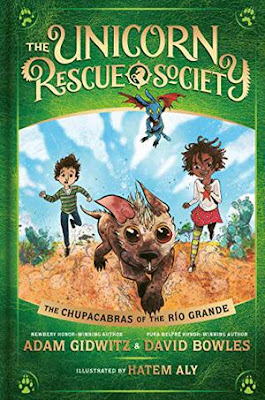 El Chupacabras is a mythical, hairless, blood-sucking creature in Mexican popular culture, known for its fondness for the blood of goats and other ruminants. The name comes from “chupar” (to suck) and “cabras,” (goats) and “chupacabras” can be both plural and singular.

As a way of getting their children and grandchildren to behave or keep them from running around at night, Mexican parents and grandparents often tell them frightening stories about El Chupacabras. This technique is not always successful.

El chup was first sighted in Puerto Rico in the late 1970s and then reappeared in the 1990s. At about that time, people in México started talking about them. By the early 2000s, el chup was more associated with México than Puerto Rico. (And there are now indications that el chup has crossed the border and set up camp en este lado.)

In this fast-moving, fourth book of the series, Peruvian professor Erasmo (“Mito”) Fauna (“Defende Fabulosa! Protege Mythica!”), “the most eccentric social studies teacher on the planet” and founder of the Unicorn Rescue Society (whose members are “sworn to protect all the creatures of myth and legend”)—enlists the aid of his young cohorts, Uchenna and Elliott, to investigate the accounts of something that may have crossed the México-Texas border and drained the blood from a cow’s body.

As Uchenna explains to Elliott:

[A] chupacabras is short and has spines down its back. It looks a lot like a bald coyote crossed with a porcupine. It hops on its hind legs, kinda like a kangaroo. Oh, and it has sharp, long teeth. Like needles. The chupacabras plunges them into a victim’s flesh and…

The three fly to Laredo and team up with two of the locals: Lupita and Mateo—and their parents, Dr. Alejandra Cervantes and her curandero husband, Israel—to solve the mystery and rescue a chupacabras pup (whom they name “Choopi”).

As with actual bilingual speech patterns, there is no translation of Spanish words and phrases. When done well, this can be an excellent technique for children at this level: those who are bilingual get a smooth read, and those who don’t speak Spanish easily deduce the meanings.

Hablantes (native Spanish-speakers) will recognize regional dialects, accents and terminology here, as well as spot-on code switching, which implies fluency and thought in both languages as well as Indigenous roots. A Chicano radio DJ, for instance, warns his listeners in Tex-Mex: “Chequen sus cabras and cows, folks! Get them in the shade si no están muertos. It’s gonna be a hot one aquí en Laredo today!”

And Lupita’s and Mateo’s mom scolds her children: “¿Cómo pudieron?” she shouts at them. “I strictly asked you—”

Here, young and middle-grade readers will learn, among other things, the difference between intention and function, which begins with the professor’s beat-up single-propeller airplane’s being used as a car. This event segues into a struggle—at the human and chupacabras level—against a newly constructed border wall that cuts off the pack’s territory and disrupts their traditional feeding pattern.

As the wall becomes the center of a socio-political storm that divides the community, the young people learn about the necessity of coming together to keep the chupacabras safe and achieve a measure of social justice as well. Although this lesson doesn’t come easily for our protagonists, young and middle-grade readers will be both entertained and instructed.

The usual characters are here—good guys and bad guys (some painted with a broad brush)—and there are also some whose long-held values begin to change. For the young members of the Unicorn Rescue Society, it’s the panic-stricken whining of a chupacabras pup—and the frantic calls of his desperate pack on the other side of the border wall—that will encourage young people on this side to investigate the horrors of real-life family separation at the wall.

Astute readers will also find hints at the so-called “Treaty” of Guadalupe-Hidalgo, the results of which are often remembered today: “We didn’t cross the border—the border crossed us!”

To create a children’s story that’s part-fantasy and part-reality—and that focuses on an important social justice issue, without polemic—is not an easy task. Bowles and Gidwitz have accomplished it with grace and style.

This is not simply a “rescue.” Rather, the children and their families engage in—and model for young and middle-grade readers—participation as an act of solidarity.

Now, more than ever, in these troubled times, it couldn’t be more needed.

The Chupacabras of the Río Grande is not only a fast-paced story that will appeal to rescuers of all ages—it’s also a stereotype-busting lesson about the the issue of immigration and migration, the function of the border wall, the separation of families and the necessity of coming together to achieve a measure of social justice.

And, if we listen closely to their whistling, we can hear the families of the chupacabras singing (in their own language): “¡Aquí estamos—y no nos vamos!”
*Highly recommended for all home, classroom and library collections.