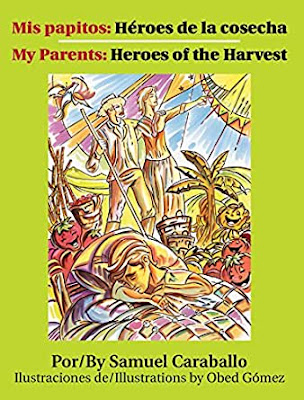 Front and center in the cover illustration, the first thing young readers will see—and possibly look at for a long time—is a child, struggling to fall asleep. His body cannot relax because he is worried. In suspended consciousness, he sees his parents, at dawn, walking to work. They are looking straight ahead and their chins are slightly raised. Papi, his left hand on Mami’s shoulder, is holding a rake. Mami, her right arm on Papi’s back, is pointing toward the east, beyond the early rays of sunlight shining on them, and a white dove hovers overhead. Framing the boy in his bed are baskets, cut sugarcane, and lots of laughing fruits and vegetables.

Gómez’s artwork, utilizing black ink and watercolor on a muted palette of mostly yellows, purples, browns, and reds, beautifully reflect the art deco style of the 1950s and are symbolic of the farmworker struggle. Full-bleed illustrations appear on the right side, and a detail from the painting separates the Spanish and English texts on the left. The white dove appears on almost every page.

This child sees his parents as “héroes de la cosecha”—heroes of the harvest.

In words and pictures, in reality and in a child’s imagination—every page speaks to the difficult lives of the agricultural workers and their families. At the same time, his voice reimagines his parents’ experiences and, in his mind, constructs a better world. He acknowledges the good in his family’s life—including their devotion to him and his younger sister—and transforms what’s not good.

In this child’s fantasy world, everyone is happy, everyone has enough, and everything has volition. He imagines, for instance, that the fruits and vegetables and the cut sugar cane, happy to be harvested, jump into the baskets and boxes by themselves. And,

the feel of my parents’ hands.

That a child of farmworkers narrates the story honors the children of farmworkers and other working children as well. In forefronting this child’s voice, Caraballo’s unrhymed tercets, in Spanish and English (each with its own pattern and flow), complement the dream style of the boy’s imagination and deflect his harsh reality. The first line creates a sound, the second identifies the sound, and the third expands his mental picture.

Rather than translating, Caraballo typically writes in Spanish first and then rewrites in English, so each version flows naturally and neither is an exact “translation” of the other.

As Gómez infuses bright yellows into every scene of the child’s parents at work, young readers will feel the blazing sun beating down on them.

Gómez’s final illustration replicates the one on the cover. The child is still trying to sleep, but sleep still does not come easy. His body is still tense. His hands still grip his blanket. Laughing vegetables continue to surround him, his parents are once again off to work at dawn, and the little white dove still hovers overhead. Young readers who initially might have wondered about the laughing fruits and veggies on the cover will, by the final illustration, understand their symbolism and significance. And they will empathize with this loving mom and dad, toiling in the fields, day after day, under a sweltering sun.

In short, profound Spanish and English verses and evocative images, Samuel Caraballo and Obed Gómez beautifully depict a farmworker family’s child, desperately trying to create a world that is much better than the one he and his family inhabit. For now, it’s his only survival technique. Mis papitos: Héroes de la cosecha / My Parents: Heroes of the Harvest is highly, highly recommended.