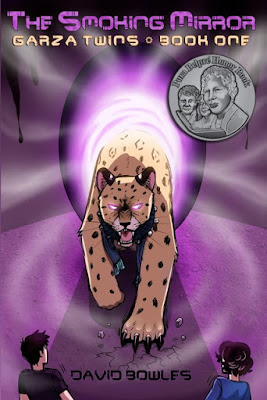 The multi-talented Chicano scholar, historian, linguist—and damn good (not to mention award-winning) writer of spell-binding children’s and middle-grade books has gifted the world with a five-volume (so far) series featuring the Garza Twins. The Smoking Mirror is Book One.

When 12-year-old small-town Mexican American twins Carolina (Carol) and Juan Ángel (Johnny) Garza learn that their mom has suddenly gone missing, they set out to find her—and their lives are forever changed. After their grieving father ships them off to relatives in Mexico, they discover that, not only is their mom a nagual, a shapeshifter—but they are naguales as well.

Hurriedly schooled by their experiences, Johnny and Carol find out that twin naguales come along only once in a millennium, and, as such, they are capable of wielding “savage magic” that not even the gods can control. Their education is quick and experiential: In order to find and rescue their mother, they must descend into the Aztec underworld and face and defeat all of the supernatural powers that confront them—in each of its nine levels.

As the twins careen between worlds, Bowles keeps his readers riveted from beginning to end. But The Smoking Mirror is more than just a page-flipper. Rather, middle readers will go back and forth, quickly reading to find out what happens next—and rereading to experience the previous episode again.

Carol and Johnny are best friends and despite lots of back-and-forth middle-school snark, the two have each other’s back:

Carol’s concern (that Johnny would overestimate his own abilities) took a backseat as the beating of dozens of massive wings came from all around them. A group of fire-breathing flying serpents was converging on them, presumably furious at what the twins had done to their master. Johnny turned and flew backwards, raising the shield with his talons to deflect their flaming attacks. Carol ducked and weaved as she flew, narrowly avoiding streams of fire. When a wyrm would get too close, she’d blast it from the sky with her xoxal-enhanced blaze…. Five deserts down. Four more to go.

In the worlds of The Smoking Mirror, middle readers will discern that the battles are not between “good” and “evil.” Rather, they’re between “order” and “chaos”—and, as Carol and Johnny battle cucuys and Mesoamerican deities, they must utilize their new-found abilities to stop the forces of chaos from ending the world. But ultimately, it’s their love for each other—and for their mother—that pulls them through.

The cover illustration by Charlene Bowles (the author’s daughter) is perfect. Here, the two children, confronted by Tezcatlipoca, the enormous, snarling, three-pawed jaguar emerging out of the smoking obsidian mirror—brother and enemy of Quetzalcoatl—are given a choice that tests their love for each other and for their mother, and their power to help destroy the world. Middle readers will be mesmerized by this image long after they’ve finished the book.

Bowles’ chapter-by-chapter “guide to Spanish words, phrases and songs” is a collection of Tex-Mex Spanish that contains regional dialects, accents and terminology—and some of it is a stand-alone hoot. In addition to offering translations, Bowles effortlessly code-switches contemporary Tex-Mex phraseology into a sort-of English equivalent that resonates with middle-graders without necessarily offending their parents or teachers. And for a wealth of information and ideas, adults may also delve into Bowles’ extensive teaching guide (http://davidbowles.us/books/author/mg-ya/garza-twins/teaching-resources-for-the-smoking-mirror/)

In The Smoking Mirror, past becomes present as myth careens into reality and a sister and brother’s impassioned search for their mother drives them to a heroism they never could have imagined. Middle readers—even those who might not initially “get” all the historical and cultural references and nuances the first time around—will be unable to put it down. And they will look forward to Book Two. The Smoking Mirror: Garza Twins, Book One is a  well-deserved Pura Belpré Prize winner.