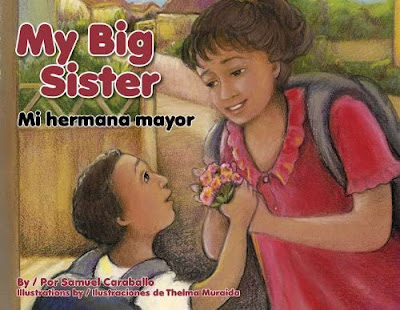 On the cover, a young boy offers his older sister a small bunch of flowers he has just picked along the road. His eyebrows are slightly raised as he looks up at her. As their hands meet, she accepts his gift with a smile.

In this gentle, bilingual story that centers the loving relationship between young Pablito and his big sister, the child shows and tells young readers all that Anita does for him while their parents work in a factory, where they “sew jeans for the whole world.”

Throughout an ordinary day, Pablito is full of enthusiasm.

Anita wakes him up, and applauds while he ties his own shoes “with lightning speed.” After Pablito gobbles up his “hot, creamy oatmeal with raisons,” Anita walks him to the school bus, where she “plants a kiss” on his cheek and he greets the driver. After school, Anita sits with him as he does his homework; then they play a round of soccer with some neighborhood boys, come home and have dinner, and get ready for a nighttime story (which happens to be Monica Brown’s Clara y la curandera, illustrated by Thelma Muraida) and bed. After Pablito falls asleep, his parents return and praise Anita for taking care of him, “because,” as Pablito says, “¡ella es era hermana mayor que cualquier hermanito querría tener!” (“She is that big sister that any little brother would want to have!”)

In working class Puerto Rican neighborhoods, it’s common that both parents have to work at low-wage factories while older siblings care for the younger children. This is one way that they are allowed to demonstrate responsible behavior and it creates a strong family bond.

Since Pablito narrates his relationship with his big sister—his experiences—he doesn’t mention that Anita goes to school after she puts him on the bus and picks him up on her way back. However, young readers will notice that Anita carries two backpacks—the bigger one is hers and the smaller one belongs to Pablito.

Anita has a lot of responsibilities, but they do not include cooking. Rather, at dinnertime, she and Pablito enjoy a delicious, nutritious, and traditional festín de sobras—a feast of leftovers. 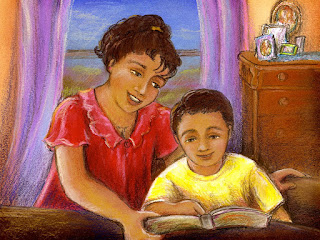 Caraballo is a talented storyteller and poet who composes first in Spanish and then in English. Since every Spanish-speaking culture or region has its own dialect, including local names for plants and animals, people’s names, and the ways in which words or phrases come together, Mi hermana mayor is full of Puerto Rican modismos. For instance, while Pablito picks “buttercups” for Anita, in Caraballo’s Puerto Rican Spanish they’re “botoncitos de oro”—little gold buttons.

Muraida’s full-bleed, earth-toned pastel and colored pencil illustrations reflect the warm relationship between the young boy and his older sister, who cares for him while their parents “sew jeans for the whole world.”

On the first spread, expressionless images of a line of factory workers at their sewing machines recede into a rounded earthy background that gives the impression of “the whole world.” Across a “road” is a sketchy image of a town with faceless inhabitants. They are all wearing jeans.

Mostly single page illustrations on the right and spare text on the left—with the English and Spanish texts separated by spot details—depict Pablito’s and Anita’s day. By their expressions, it’s clear that the two are devoted to each other. And on almost every page, their tiny Chihuahua accompanies them.

It’s important to note that, although Pablito and Anita’s parents work at low-wage jobs, the family is not impoverished. They live in a tree-lined Puerto Rican neighborhood of small, single-family houses, they have curtains on the windows and furniture and books and family photographs.

Samuel Caraballo’s engaging bilingual story of a day in the lives of loving family members, and warmly illustrated by Thelma Muraida, will appeal to young readers—both Spanish- and English-speakers. My Big Sister / Mi hermana mayor is highly recommended.