Tales of the Feathered Serpent, Book 1: Rise of the Halfling King 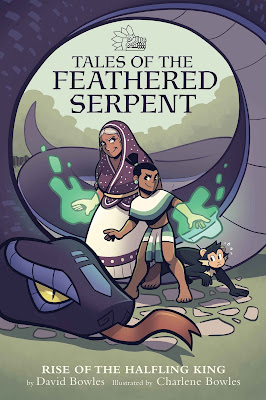 For millennia, Indigenous elders have transmitted histories and their teachings through story. In many of the teachings the lessons are inferred rather than directly stated. The objective is to tell an interesting story that would engage listeners in an enjoyable way. The story stays with them longer and the lesson in the story might be discovered later. Traditional stories are interesting, engaging and memorable. And when written or drawn, the depth of meaning is still there. “Graphic novels”—when done well—engage the eyes and the mind at the same time. And the presence of the storyteller, which was always visual, remains in the graphic novel.

Some two thousand years before the Spanish conquest, the Mayan peoples of the Yucatán Peninsula developed a hieroglyphic script to record their stories and histories with words and images. It’s not much of a stretch to see these codices—most of which the Spanish conquistadores burned—as the forerunners of today’s graphic novels.

In Tales of the Feathered Serpent, David Bowles translates traditional Yucatec Mayan stories and gifts them to young adult readers. Now, in Rise of the Halfling King—the first of ten graphic novels, each based on a story in Tales of the Feathered Serpent—he transmits some of this millennia-old traditional lore in a way that’s accessible to younger readers, and, accompanied by Charlene Bowles’ vibrant art, shapes these stories into another part of the same experience.

Trained to become a curandera since she was a young girl, apprentice witch Almah is beloved by her community for her goodness and kindness and ability to call down the gentle rain. Time passes, and although nearby Uxmal had not had a king for a hundred years, the aluxes—“mystic elfin beings who wield great magic to protect nature”—select Almah to receive a magic stone and a drum that will “announce the true king of Uxmal.” As the villainous Kinich Kak Ek is enthroned, his chief advisor, the sorcerer Zaatan Ik, announces that “no man born of a woman can usurp” his sovereignty and that when a “kingmaker” drum sounds, his rival must be given the opportunity to take the throne by overcoming three challenges.

Uneasy with the sorcerer’s prophesy, (partly because he mistranslates “not born of a woman” as “not born”), the king conquers the surrounding cities and establishes a barbarously cruel empire.

Out of fear of the king and his priests, the community shuns Almah. Lonely and wandering in the hills, she finds an unusual egg, which she takes home and places near the hearth, by the “kingmaker drum” that she had hidden. When a little boy—a “halfling” secretly gifted to Almah by the aluxes—emerges, Almah adopts him as her grandson, names him Sayam, and as he grows (but not as much as other young people), she teaches him “green magic and the sacred prayers that call down gentle showers in spring.” And she realizes that he’s destined to be king.

Under Almah’s tutelage and through her unconditional love, the brave and reckless young Sayam matures and begins to understand what it is to be a leader with a sense of duty to his people. He also learns earth magic, how to read the “ancient books”—the sacred Mayan codices—and works with the Bobatil Ju’un, the Book of Prophecy. These are important skills he will need when it comes time to fulfill his prophecy—to defeat Kinich Kat Ek and assume the throne.

Throughout this gripping, fast-moving plot—which includes Sayam’s defeating a serpent from the underworld that aims to devour the people’s beloved dead—Bowles seamlessly weaves in references to Mayan philosophy, ethics and traditions. As well, he embeds, in heavy, bold type, the incantations that Almah, Sayam, and others utilize in the Yucatec Mayan language. And he sprinkles into the dialogue present-day phrases and thoughts, such as when Sayam apologizes to some of the dead ancestors for having to unwrap them: “Sorry, old ones, I need a diversion” (to get the serpent’s attention).

Throughout, her varying palettes tie into the story’s environment and what’s happening at a particular time. For instance, the forested areas overlay greens, the darker environments are mostly blues and purples, the outside kingdom locations feature more reds and teals, and the inside scenes where the rulers plot to keep themselves in power are dark and foreboding browns.

It’s a brilliant idea to present Mesoamerican traditional literatures as “graphic novels” for young people because they’re essentially extensions of the ancient Mayan codices. As David Bowles writes: “Blending written words and images, comics and other sorts of graphica allow our brains to process stories more like our ancestors did.” Working together, the father-daughter team of David and Charlene Bowles have produced a remarkably illustrated, Mayan tradition-based story, seamlessly interwoven with comic-book action (wham! pow! bam! thud! klonk! thok! fwoosh! glorp!) And it’s not surprising that the two have pulled this off brilliantly. Tales of the Feathered Serpent, Book 1: Rise of the Halfling King will mesmerize middle-grade readers.

(Note: I was disappointed to learn that Cinco Puntos Press intends to bring in “various illustrators” for the remaining nine volumes of Tales of the Feathered Serpent. Young readers form visual connections with graphic novels, and the first in a series establishes the vision for the rest. Contracting with different artists who use different art styles is likely to destroy the vision and ruin the continuity. I would like to have seen consistency of the creative team across the series.—BHS)