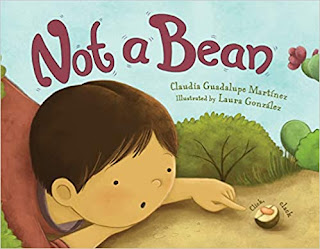 On the cover, a young child is astonished at having discovered a Not a Bean clicking and clacking on the desert floor. Above the child’s head, the book title appears to be in motion as well.

González’s bright, naturalistic digital art, laid out on spacious double-page spreads, reveal the wide expanse of the northern desert mountains of Mexico—and its inhabitants—from early morning to night. It is here that seven young friends, with skin tones that reflect the varying ethnicities of the Mesoamerican peoples, explore the desert and find a bean that is Not a Bean.

Young readers and listeners will learn that the Not a Bean is actually a small seed pod that combines into larger pods that grow on the yerba de la flecha, a desert shrub—and that each Not a Bean is the home and food source of a caterpillar who burrows into the seedpod.

The text consists of delightfully patterned code-switching in which Spanish words and phrases are accompanied by engaging illustrations that young Spanish-speakers will enjoy and young English-speakers will easily decode. (“At noon tres cascabeles slither from their nests among the rocks. Their tails rattle.”)

As a group of young girls and boys—“siete amigos”—explore “for treasures washed up by the rain,” they find a feather, an old boot, a piece of wood, and “nueve saltarines” (nine jumpers). They draw in the dirt “ocho óvalos” (eight ovals) which they surround to see how many saltarines will jump inside. They poke their saltarines with a stick, and cheer as the jumping beans roll into the ovals.

Days later, the amigos return and poke the Not a Bean with a stick, but it doesn’t jump because it’s busy spinning a cocoon. Finally,

A majestic polilla burrows out.

It is not a caterpillar anymore.

It was never a bean.

The moth spreads its wings

…and soars into the sky.

González’s limited palette of mostly greens, blues and browns virtually glows as it reflects the textures of the desert and the homes of its inhabitants.

In addition to counting from one to ten and identifying animals in the Spanish-and-English glossary, the back matter contains an Author’s Note full of scientific and cultural material about Laspeyresia saltitans (female jumping bean moths) for students who want to learn more.

Not-a-Bean is an excellent read-aloud—and a joyous celebration of science, friendship, language-learning, and culture—all in a calm, beautifully illustrated “counting book” for the youngest readers and listeners (and everyone else).