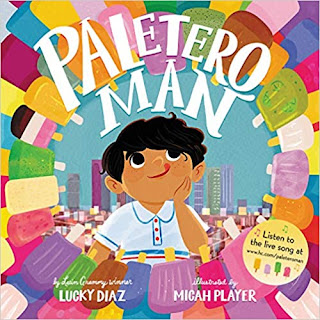 On the cover, a young Mexican American boy is daydreaming. With the L.A. skyline behind him, his thoughts are framed by a virtual rainbow of delicious paletas (fruit ices) of differing shapes and flavors. What a struggle it is to choose!

Paleteros are street sellers of paletas and helados, Mexican-style ice and ice cream pops in a variety of gelato and sorbet flavors. They’re sold from pushcarts called paleterías. Although the words don’t have English translations, paleteros and their paleterías are a beloved cultural icon in Mexican and other Latino communities across the U.S. and in many Latin American countries as well.

Paletero Man—the song and story—honors the paleteros, much like the song, Watermelon Man (written by Herbie Hancock and recorded by Oscar Brown, Jr.) honored the Black street vendors who sold fresh watermelon slices back in the day.

It’s the hottest day of the year in L.A. and, with his pocket full of change, a young child runs off to find the neighborhood paletero. Along the way, he greets friends, relatives, and other street vendors and shop keepers; among them, Tío Ernesto, who sells tamales; Ms. Lee, who sells Korean BBQ; and Frank, who repairs bikes.

The youngster’s first-person narrative, in A-B-C-B rhyme and code-switching, is well done and a fun read. For instance, when he finally reaches Paletero José, the child says:

Do you have that sabor?

He smiles a big smile—

But as he reaches into his pocket, the child finds that all the change he had saved up—is gone! Fortunately, Tío Ernesto, Frank, and Ms. Lee had seen the coins fall to the ground, picked them up, and returned them. And Paletero José, moved by their deed, gives everyone in the neighborhood a free paleta:

or whether it’s sunny,

you have any money,

an amigo in need.

Selling paletas is not a great money-making gig, so it would be a rare event for a low-income neighborhood paletero to give away his entire inventory. But it could happen—and especially, as an acknowledgment of generosity to neighbors who do the right thing. Paletero Man is a celebration of Mexican life and culture in the U.S.—and it’s as sweet as a paleta.

In Paletero Man, Díaz recognizes a common experience grounded in goodness. While small deeds are rarely rewarded, youngest readers can share with each other the different ways that a community can come together in a time of need.

Player’s bright digital illustrations are vibrant and joyous, and complement the exuberance of a young child who—with his relatives, friends, and neighbors—live, work and play together in a multicultural, multiethnic, multigenerational community. Here, complexions, clothing and hairstyles vary, several men sport tattoos, and, in the  park, there’s a hijabi with her child.

And worth noting is that, in this story, the Spanish words and phrases are not italicized. Rather, Spanish and English—like the people in the community—are mixed.

Paletero Man is Lucky Díaz’s and Micah Player’s homage to Mexican culture—both in Mexico and in the U.S. The story is as delightful as a juicy paleta de horchata or melón.

Warning to young readers and their adults who find the song, “El Paletero” performed by Latin Grammy-winning Lucky Díaz and his Family Jam Band on The Friday Zone on PBS (scroll down at luckydiazmusic.com): Make sure you have nothing else to do but dance all day. The song and rhythm are that catching.

[Note: Horchata and mélon are my favorite flavors.]