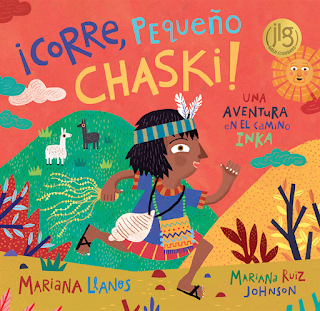 On the cover, a llama, a vicuña, and the Inka sun (Tayta Inti) watch as a young chaski—on his first run on the Inka Trail as a messenger to the Inka royals—tightly grasps his khipu, the rope and hanging knotted threads that will communicate an important message he must deliver. On a cord around his neck hangs a pututu—a conch, the giant seashell that is used, even today, to call everyone together. In Inka times, chaskis blew on the shell to let people know they had arrived at their destination.

Born to a family of chaskis, this boy has been taught that, to become one of them, he must be strong, swift, and sharp—but most of all, he must never be late. As “Little Chaski” begins his run to carry a message from the Qoya (the Queen) to the Inka (the King), observant young readers will keep their eyes on the khipu. 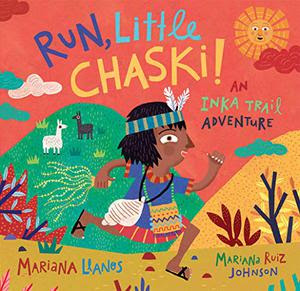 First, the young chaski accidentally knocks down a chinchilla, and stops to apply first aid. Then, he rescues an allqu (a Peruvian wild dog), who has fallen into the river. As the boy resumes his run (and young readers will see the chinchilla passing the khipu to the dog), he spots a condor, trapped in a tree. Taking care not to get hurt, Little Chaski frees the condor (whom young readers will see in a tiny illustration, accepting the khipu from the dog). It’s getting later and later, and Little Chaski is getting more and more worried. Finally, “he shoots through the temple doorway just as Tayta Inti’s last rays sink behind the mountains.”

The Inka and some of his people are there—impatiently waiting for the khipu—and the boy realizes that it’s gone! But. Just when everyone expects the worst, his three grateful friends appear—and drop the khipu into the boy’s hands! Of course, Little Chaski is relieved, and after he relates the story, the Inka honors him for his kindness and generosity. Not only is he now an official royal messenger, he also has a new name to suit him: Big-Hearted Chaski.

There is so much to enjoy about this heartwarming story, both the Spanish and English versions. (The author wrote them simultaneously, so there’s no word-for-word translation and readers can enjoy one or both interpretations.) For instance, when the boy is little more than a toddler, his male relatives advise him: “

“Be sure to be strong,” says Brave Chaski, his older brother.

“Be sure to be swift,” says Big Chaski, his father.

“Be sure to be sharp,” says Wise Chaski, his grandfather.

And in the Spanish:

(In the English version, they tell him and in the Spanish, they remind him.)

Inka iconography is represented throughout. Especially notable is the Inka sun—Tayta Inti—who has his own personality. Young readers will see him—fully or in part, with varying facial expressions—on virtually every page or spread that depicts daylight. At dawn, for instance, Tayta Inti yawns—it’s time to wake up and light up the world. Next, a concerned Tayta Inti peeks through a trapezoidal window as the Qoya hands the youngster an important khipu to bring to the Inka. Tayta Inti is worried as he sees animals in trouble—and relieved when the human youngster stops to help them.

As the young chaski runs—and Tayta Inti keeps an approvingly watchful eye on him—he trips over a chinchilla and bandages his paw, rescues an allqu (a Peruvian hairless dog) stuck in the river, and (very carefully) frees a condor, trapped in a bush. When he finally arrives at the Inka’s temple, he finds to his horror—and the Inka’s rage—that the important khipu is lost.

In a parallel story—half-hidden in the illustrations—the animals whom the young chaski had rescued find the dropped khipu and pass it to each other. The stories merge as the “three grateful friends soar from the clouds” and drop the message into the youngster’s hands. The boy is relieved and the Inka is impressed—so much so that he proclaims the child an “official Chaski of the Tawantinsuyu,” and in recognition of his kindness, the Inka names him “Big-Hearted Chaski.”

Mariana Ruiz Johnson accomplished her bold, vibrant, intensely-colored “digital collages” by first hand-painting the textures, using pencil, scanned paper, acrylics, and gouache; then scanning them and creating the illustrations using Photoshop. That her characters are stylized, yet individualized—complexions vary among the human characters, for example—is unusual and refreshing in a picture book such as this one. Observant young readers will especially notice—and call attention to—the series of rescued animals holding onto and passing the khipu to each other.

In addition to the full-page illustrations and gorgeous iconography—such as the patterns on clothing and vases, for example—Ruiz Johnson’s beautifully decorative endpapers hold miniature versions of the animals interspersed with khipus.

Back matter includes a helpful glossary of Quechua words, a map of the Inka empire superimposed on a partial map of South America, accessible information about the Inka Empire, the Inka Trail, animals in South America, and use of the spellings, “Inka” and “khipu” as opposed to “Inca” and “quipu.” Another section poses and answers questions about the Inka and the important work of the chaskis.

“Small” details, such as the author’s use of the Quecha spellings of the people’s name,“Inka,” rather than the colonial Spanish spelling,“Inca”and “khipu” rather than “quipu”—signals that the people are reclaiming their languages, changes the narrative and, for older readers, opens up conversation about Indigenous peoples and Indigeneity.