Me Oh Maya // You Wouldn't Want to Be an Aztec Sacrifice!

It's no secret that I’m a fierce advocate for literary dignity and equity in publishing. I want to see many more books by writers from underrepresented groups (BIPOC, disabled, queer) published each year for kids and adults alike. However, some folks misinterpret that mission as an implied disavowal of any book written by someone outside the culture depicted in its pages. But I actually do think it’s possible (and for secondary characters, outright desirable) for an author to write about characters and communities that don’t perfectly align with their own lived experiences.

The catch? It’s hard work. You have to put in the time. Research. Advocate. Uplift. Live alongside and be a friend and ally to people from the group in question. Then write with respect and pay a cultural expert from that community to review your manuscript and give you feedback (then incorporate their suggestions or corrections).

“Why, David?” I imagine someone asking. “What’s the worst that can happen?”

The short answer? People can be insulted, deeply hurt, or perhaps even permanently scarred by mistakes you make.

I want to take a look at two examples of authors writing “outside of their lane” and getting things horribly wrong. Mind you, anyone can screw up when writing. We’re human. But these are books from major publishers whose entire teams really dropped the ball in terms of literary dignity. 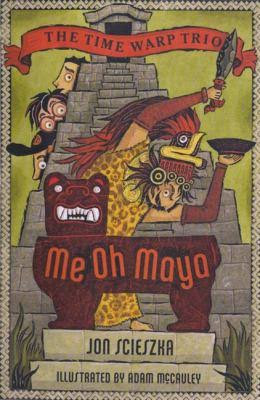 First up is Me Oh Maya, book 13 of Jon Scieska’s The Time Warp Trio. (It’s the volume that made my son Angelo abandon the series, by the way.) The three protagonists—friends Joe, Sam, and Fred—are yanked from their basketball game back in time to a Maya ballcourt.

Let’s get something straight right away. Maya people still exist. Seven million of them, in fact, in southern Mexico and Central America, with tens of thousands more living in the US. So if you decide to write about pre-invasion Maya, you’re depicting living people’s ancestors, folks who still speak that language and preserve many of those customs.

Which is why it’s so disappointing that Me Oh Maya jumps immediately to bloodshed and human sacrifice on the first page: “Explain yourselves or your blood will be spilled in sacrifice,” says a “short brown-skinned guy in a wild feathered headdress.” Two pages later, Sam explains “their habit of sacrificing humans,” adding that the high priest is “not kidding about that rip-your-hearts-out.”

By way of explanation, all of this is wrong. Strangers would not have been immediately sacrificed. The intermittent offering of human blood to the gods was a solemn religious ritual at particular times of the year that ensured the wheels of cyclical time kept turning. Those sacrificed were prepared and treated with dignity for many months. Their families were typically compensated after their death. A better analogy for Maya sacrifice would be soldiers who are sent on missions from which they know it’s unlikely they’ll return. That kind of sacrifice, not horror-movie, death-at-the-hand-of-a-slasher kind of death. To call that sort of patriotic, pious laying down of one’s life a “habit of sacrificing humans” by “short brown-skinned” people is problematic, to say the least.

All that aside, for that to be the IMMEDIATE go-to image for the writer of children’s books when he thinks of the Maya? Gross. Indicative of some deep-seated privilege and ignorance. Imagine if every children’s book written about the US by people not living here featured gun violence. Yes, it’s a part of US life, but hardly the defining aspect of our existence.

But, of course, human sacrifice is the main plot contrivance of Me Oh Maya. The boys use basketball moves to wow the people of Chichén Itzá and win the game (the book mistakenly asserts that losers get sacrificed—imagine how impossible it would be to keep a game going for a year, much less centuries, if that were the case). However, the high priest, who they think looks like their Latino teacher Mr. Ramírez on a bad day, decides to sacrifice them anyway.

That’s when he reveals his name: “Kakapupahed.” The kids have a field day with this, and I’m sure the author and editor found it hilarious.

But making up a name that sounds like foolish words in English to mock a people’s language? That’s straight-up racist. (The invented word is also meaningless in the Itza Mayan language, which furthermore lacks the consonant “d.”)

The book makes some attempt at presenting life at Chichén Itzá as otherwise pleasant and fascinating (though frankly generic Mesoamerican in the details of cuisine, etc.). The boys find an ally in the high priest’s nephew, named “Jun,” or “One,” which is one half of a normal Maya name at the time—they consisted of a number from 1-13 and one of 20 day signs, so it would have been more realistic if the kid’s name was Jun Balam (One Jaguar) or something along those lines.

It’s nice that Jun and his mother are key to the Brooklynites’ victory and return to the future, but all those moments are marred by the cultural insensitivity, obsession with the lurid or “exotic” aspects of Maya communities, and racist humor. A Maya or Mestizo (part-Indigenous) child reading this book will find their people stereotyped and mocked. How is that pain justifiable? 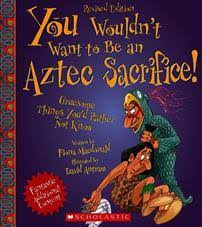 A duo of British creatives (author: Fiona Macdonald, illustrator: David Antram) are the guilty parties responsible for the even more reprehensible book You Wouldn’t Want to Be an Aztec Sacrifice! Gruesome Things You'd Rather Not Know. (Scholastic, 2001). The reader is cast as a random Mesoamerican (presumably Nahua) from some far-flung conquered town who gets captured by “Aztecs” in a flower war and taken back to Tenochtitlan to be sacrificed. Now, flower wars certainly happened. The Triple Alliance—the Mexica, Texcoca and Tlacopaneca peoples now referred to as Aztecs—did require tribute and take warriors prisoner for sacrifice.

But the author has first of all decided to linger on all the lurid aspects of that interchange without noting that the OTHER side also took “Aztec” prisoners for sacrifice.

In fact, the book treats the unnamed protagonist as shocked again and again at “Aztec” beliefs and practices, even though the Triple Alliance was culturally Nahua just like most of the rest of Central Mexico, multiple nation states worshipping the same gods in essentially the same ways.

The book also abounds with exotification and inaccuracy. Because of religious symbols on shields, they are referred to as magical: “Many soldiers believe the magic will protect them on the battlefield.” I can’t imagine the creators of the book saying the same about a cross on the shield of a British knight. The Aztecs are called “energetic and warlike,” “fearsome,” and “ruthless.” Captives are marched through a stereotypical northern Mexican desert to reach Tenochtitlan rather than the actual pine forests that once surrounded Lake Texcoco in the Central Highlands.

Literally every page has at least one completely false statement, from the assertion that all priests stank because of putrid blood in their hair (only one sort of priest had this practice) to the baffling comment that some deceased Nahuas “make a long, miserable journey through the underworld before they finally perish in hell,” which completely miscasts the role of Mictlan (not to mention the fact that the Nahuas didn’t believe in hell). Wherever there’s a debate in scholarship, the creators side with the most extreme, titillating interpretation, as with the possibility of cannibalism (for which the evidence is mostly Spanish, post-Invasion, and in dire need of Indigenous religious context).

As with Me Oh Maya, the inaccuracies and lies are especially harmful because today there are 2.5 million Nahuas (descendants of the “Aztecs” and the related nations they conquered) in Mexico and Central America plus thousands more in the US. In addition, many Mexicans and Mexican Americans of mixed heritage (we often call ourselves “mestizos”) are heirs to a syncretic culture that blends Nahua and Spanish traditions and language. We grow up proud of the accomplishments of the “Aztecs,” Toltecs, and other pre-Invasion Nahua peoples.

For our children, You Wouldn’t Want to Be an Aztec Sacrifice! is a potentially damaging piece of overwrought nonsense from outsiders who have not done the work of living alongside us and considering the vital cultural heritage of the “Aztecs” that is kept alive in our communities.

Neither of these books promotes the literary dignity of Indigenous or Mestizo people in Mexico and the US. The writers, editors, and publishers should be ashamed of the harm they have done in the name of being clever and cute in that supercilious way that conveys to even the densest reader, “These people were bad and weird. It’s good that they’re gone. Western white culture is so much better, isn’t it?”

Such messages are simply unacceptable and must be fought.