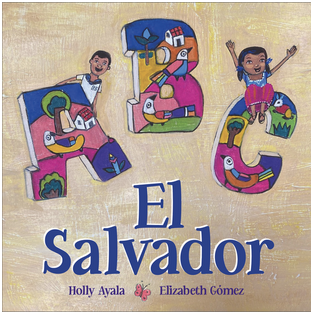 On the front cover, raised lettering in glossy relief—large ABCs on which two Indigenous children climb—invites young readers to touch the painted block letters similar to the wood block letters that El Salvador is known for. And as they “visit” the country and towns in El Salvador, the carefully crafted ABC format shows them aspects of rural life and some history as well.

Within the country of El Salvador, the author highlights the city of San Salvador and the town of Santo Domingo de Guzman (Witzapan). Here, youngsters from el Norte will get to meet Xiomara and her familia—and learn about some history and culture of El Salvador.

In the voice of Xiomara, a young Indigenous Salvadoreña, this beyond beautiful abcdario is about and especially for the children of El Salvador, who will see themselves reflected here. The child’s mixed family has darker and lighter complexions.

Forefronting the Indigenous-influenced Salvadoran Spanish with the English translation below, Xiomara introduces young readers to her relatives, her friends and her neighborhood. The Spanish and English, as well as the illustrations, are personal and cultural, and community specific.

[In a personal communication, the author told me that she based the words and illustrations on her own experiences. For instance, “atol” is her favorite beverage; and for “quesadilla,” she remembers that, “when I was little, my father’s friend, Doña Aida, would always make me quesadilla. I still have her recipe!”]

Rather than beginning with “who I am” (which is more like an American English way of beginning this genre), the young narrator here uses the A for “atol” to describe what she likes: “Me gusta el atol de elote bien calientito” (I like my sweet corn beverage nice and warm). In this first illustration, as she holds the bowl of atol to show young readers, Xiomara is dressed in sandals, a red skirt and blue patterned blusa, her hair neatly tied with blue cloth. Behind her is a meadow with some corn growing, and flowers, birds and butterflies circling.

The other letters of the alphabet name and show who and what Xiomara finds meaningful: “barro” (clay, out of which her grandma makes pans and pots); “cipotes” (the neighborhood kids who join her at play), “chucho” (her dog, whose name is “Chocolate”), “dulces” (her favorite candies), El Salvador, “farolitos” (her favorite lanterns), “garrobo” (a gigantic lizard who visits her backyard); “huacales” (the large and small bowls in her house). Readers also meet her relatives and the things she enjoys eating, the delightful rain, the music in the town plaza, the Nahuat language, and all the people, places and things that encompass her life.

For “O,” there’s a painting on Abuelita’s wall of the beloved Archbishop Óscar Arnulfo Romero in the park, surrounded by children. Young readers will not learn here that he was an advocate for the poor who was assassinated while celebrating mass—and later, beatified—for his passionate voice against injustice. That’s a story for another time; but it’s an important part of young Xiomara’s and her family’s lives and El Salvador’s history.

Gomez’s art, done with gouche, has a rustic look, accomplished by sanding the colors down and uncovering a previous acrylic layer. What results is a bright “painting” of a small town in El Salvador and an invitation to celebrate Xiomara’s and her Indigenous family’s life, culture and neighborhood. ABC El Salvador is an extraordinary little book.