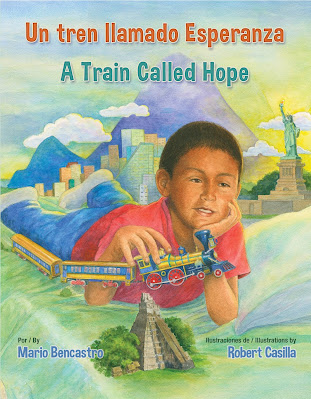 For many immigrants from Central America, part of their journey might be on top of a dangerous, speeding train. They often refer to the train as “La Bestia” (“The Beast”), and pray that they arrive in one piece. Un tren llamado Esperanza / A Train Called Hope is one person’s memory of that train ride.

On the cover, a young child is stretched out on his bed. As he plays with a toy train—a gift from his mother—that crosses “the mountain of (his) pillow into the valley (on his) bed,” the boy dreams about faraway places: big cities, mountains, the Statue of Liberty. The boy we see here is a young adult now, and this toy train was his first present. He imagined then that “the girl in the window looked just like (his) sister.”

Now, this young man is about to ride on a real train to meet up with his family, who are working “in far off places.” Not in a train, but on top, traveling with several hundred strangers—children, women with babies, young men—all sharing the perilous journey and little else. When they reach the border, all of them “leap down from the train and hide in the thick brush to wait for night to fall.” Now he “begs the moon to rise and illuminate the border”—

It’s not unusual that people fall from these trains and are killed. Casilla’s brilliantly detailed illustrations—created with watercolor, pastel, and colored pencil on cold press watercolor paper—show the shocked faces of five “passengers”—their fear and horror—as they ride atop the dangerous train and witness an almost fatal accident. A woman covers her face in prayer, a man squelches a scream with his hand, another woman’s shocked expression asks: “Why is all this happening?”

As a young adult, the young man and his mom finally embrace (he imagines)—they are together. He names his remembered toy electric train “Esperanza” (“Hope”)—because, unlike the dangerous train whose top carries agricultural workers from Central America to here, “it will cross the planet freely / uniting sons and mothers / carrying and bringing the happiness / that all children dream of.”

Note: a companion book recommended for children is Dos Conejos Blancos (Two White Rabbits) by Jairo Buitrago, Rafael Yockteng, and Elisa Amado, which takes place on an actual journey. Its review can be found at decoloresreviews.blogspot.com dosconejosblancos.