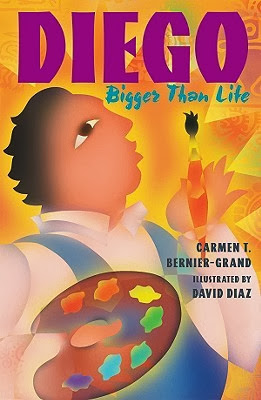 In the text of her work, the author chooses to leave Rivera’s perspectives virtually untouched, relegating unanswered questions and hypotheses to a helpful author’s note. In a piece entitled “The True Life of Diego Rivera,” Bernier–Grand raises the inconsistencies between Rivera’s writing and information available today—When Rivera was born, was the pale infant really thrown into a dung bucket? Was he really raised by an Indian wet nurse? Did the Mexican Communist Party really expel him, or did he expel himself? Here is where Bernier-Grand details the political and personal controversies of Rivera’s tumultuous life and work, as well as his many stormy dalliances, affairs and marriages.

In addition to “The True Life of Diego Rivera,” there’s a short section entitled “In His Own Words.” Other back matter includes a glossary, a chronology of Rivera’s life, a list of sources, and copious notes that support Bernier-Grand’s research. This wealth of material will prove invaluable for student research and classroom projects, including, for example, a study of political mural art or that of point-of-view in published biographies and autobiographies.

But it’s the biography itself that’s a veritable work of art. Here, Bernier-Grand, with an amazing economy of words, paints a portrait of a man who was, indeed, “bigger than life”:

As naturally as I breathe,
I painted in grand scale the colors of Mexico—
clearer, richer, more full of light than colors in Europe.

As naturally as I speak,
I painted in grand scale the music of Mexico
in markets, crowds, festivals—
Burning of the Judases, the Dance of the Deer.

As naturally as I sweat,
I painted in grand scale the workers of Mexico
in fields, mines, streets—
Indians carrying bundles of calla lilies.

A million public walls
wouldn’t be enough
to paint all the beauty of Mexico.


Diego: Bigger than Life is, indeed, an amazing mural of words. It is highly recommended.