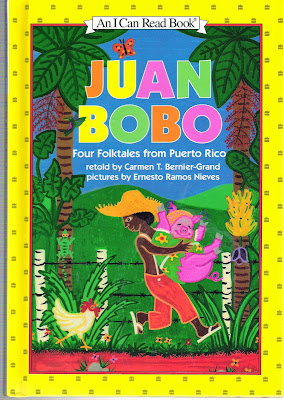 Oral stories often speak of the real and unreal, known and unknown, past and future, helpful animals and powerful tricksters and courageous heroes. And sometimes, oral stories impart their wisdom through characters who appear dazed and confused—who teach proper behavior by behaving improperly. Juan Bobo—as one could discern from his name—is Puerto Rico’s most beloved noodlehead. “For decades,” Bernier-Grand writes in her short author’s note, “Juan Bobo, the invention of rural storytellers of Puerto Rico, has been one of the most popular fictional characters on the island…. The oldest and best-known Juan Bobo stories authentically illustrate what life was like in poor rural areas of Puerto Rico at the beginning of the twentieth century.”

There are literally hundreds of storybooks about Juan Bobo, some better than others. In the 1920s, Pura Belpré, the wonderful storyteller and puppeteer—and first Puerto Rican librarian hired by the New York City Public Library system—brought Juan Bobo to the mainland so that Puerto Rican and other Spanish-speaking children and their families could enjoy his antics in Spanish—and feel connected to their cultures in a hitherto English-only library system.

In telling these Juan Bobo stories, Bernier-Grand is not only a wonderful storyteller, but also someone who illustrates Puerto Rican rural traditions—from subsistence farming, to minding one’s manners as a dinner guest, to selling homemade syrup at church. Here, to the constant exasperation of his overburdened mother, Juan Bobo takes all of her instructions literally, and each task she gives him results in a comedy of errors.

For the most part oral stories leave their lessons unstated, for the listeners to figure out and enjoy. Here, Bernier-Grand has flawlessly transported the stories to print; her flow and timing are superb. Each time the ever-adventurous Juan Bobo falls into a new and different catastrophe, youngest listeners and emerging readers will scream with delight.

Here is Juan Bobo, asked to bring his mother some water, trying to make his task easier and winding up with a big mud puddle. Here is Juan Bobo, instructed to take care of the family pig instead of going to church, and dressing her up in his mother’s Sunday clothes. Here is a hungry Juan Bobo, invited to lunch, told not to sneeze or scratch or touch the food with his hands—and leaving as hungry as when he arrived. And here is Juan Bobo, told to sell their homemade syrup to the church ladies who are small and soft-spoken and “they wear shiny black dresses and carry fans”—making sure the flies get their fill.

Ramos Nieves’s acrylic paintings, on a palette that reflects the hot tropical colors of the Puerto Rican countryside, are stylized and vibrant, and complement Bernier-Grand’s charming tellings. There are Puerto Rican flags all over—including on the roof of the “Bobo” family’s tiny house and on Juan Bobo’s kite. There’s a lizard climbing up a palm tree in the front, and chickens running free. Young Juan Bobo is shirtless and wears a straw jibaro hat and pants. He has a dark complexion; his mother, who wears a headscarf when she’s working, has a slightly lighter complexion; and the gussied-up neighbor who invites them to dinner—and lives in a house with a china cabinet and lace tablecloth—is clearly of mixed ancestry.

But there is a problem: Since these Juan Bobo stories are folktales from Puerto Rico, one might think that the Spanish text would either be given prominence—or at least, placed near the English text and artwork. Rather, the Spanish text, in small print spanning only five pages, is relegated to the back of the book. So early elementary school teachers who want to read these stories to a class in Spanish, would have to flip back and forth from text to illustration—in a very small book. As well, the Spanish translation appears to be rushed and literal, not typical of the way that Bernier-Grand carefully crafts her writing. I wonder why this was the case. Treating the Spanish text as unimportant back matter is clumsy and confusing, not to mention disrespectful, to the language and the culture.

Juan Bobo: Four Folktales from Puerto Rico is currently out of print and unavailable. My hope is that a progressive multicultural publisher will see it for the treasure it is, and republish it in a large-format, bilingual storybook that children and their teachers will love. As it stands, this version of Juan Bobo stories is highly recommended for the wonderful English text and the amazing artwork; but it’s not recommended for the book size, Spanish as an afterthought, and abysmal design.