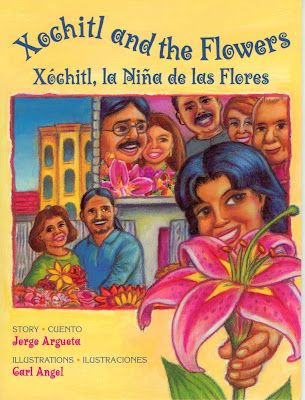 Newly transplanted from El Salvador to San Francisco, the hard-working Flores family struggles to transition from one culture to another and to adapt to a new urban environment. As in their homeland, Xóchitl and her mother decide to sell flowers in the city; and when her father locates an apartment to rent in a building with a garbage-laden vacant lot, the family and a few neighbors clear it and build a plant nursery. But, as an unfeeling landlord demands that it be shut down, the nursery’s fate is uncertain. How everyone comes together and softens the landlord’s heart is the crux of this tender story of family and community.

Argueta, a talented poet, infuses the story with the imagery of the immigrant experience: days going by slowly as turtles, ants circling their world of dwarf lemon trees in just a few minutes and snails carrying their little homes on their backs. The Spanish text reads beautifully and is particularly expressive; it seems likely that Argueta wrote it first and then translated it into English, which was then edited.

Here, for instance, Spanish-speaking children will easily identify with Xóchitl, as she practices English:

En la escuela, ya puedo decir varias oraciones en ingles. Cuando estoy sola las practico y parezco loquita diciendo: —How are you? My name is Xochitl. Do you like flowers?

But some of the English text will confuse Spanish-speaking children. Here, Xóchitl is telling, in English, how she practices some simple sentences in English:

In school, I can already say a few sentences in English. I practice them when I’m alone; I probably seem a little crazy when I ask myself, “How are you? My name is Xochitl. Do you like flowers?”

Angel's acrylic and colored-pencil illustrations of the characters seem flat, but his background images, including photo collages, are bright and vibrant and will hold the attention of the youngest readers.

The story’s conflict is too easily resolved; I would rather have had it more closely reflect the actual community struggle—as neighbors and local organizations came together to convince the City Planning Commission that the family’s nursery was an asset—as Argueta describes it in his endnote. Still, Xochitl and the Flowers / Xóchitl, la Niña de las Flores, is an evocative story of a hard-working immigrant family from Central America, and is highly recommended.